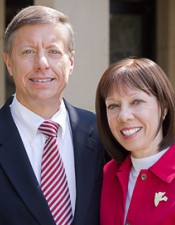 Shanks will bless the Northeast

Bailey McBride
Ohio Valley University’s selection of Harold Shank as its next president will be a landmark for the Vienna, W.Va., university and for Christian education in the Northeast. Shank is a seasoned minister, church leader and biblical scholar. He will strengthen Ohio Valley University through his leadership.
I have a special place in my heart for Harold and his wife, Sally. They were students at Oklahoma Christian during the early years of my work at the school. I never had Harold in a class, but I knew who he was and knew of his work. He was a freshman in 1968 while I was chair of Language and Literature.
He worked on the school newspaper and the yearbook, and I often heard sponsors of those publications talk about his religious commitment and his excellent work.

He declared Bible as his major and was active in Harvesters, an organization for students interested in ministry. His involvement was consistent throughout college, and somehow along the way he had time to meet and win Sally Tague.
After his graduation he worked as an admissions counselor for OC and also served as junior high youth minister for the College Church of Christ (now the Memorial Road Church of Christ).
The Shanks moved to Memphis, Tenn., for him to attend Harding University Graduate School of Religion. He worked for the Highland Street Church of Christ while he finished his degree.
During that time, the Shanks planned with another OC couple to plant a church in Milwaukee. The team worked for several years and planted a very strong north Milwaukee church. During those years, Harold completed his doctoral studies in Old Testament at Marquette.
Eventually, Highland called the Shanks back to Memphis to fill their pulpit. Sally and Harold established themselves as spiritual leaders for a church on the edge of inner-city Memphis. Through the years, I read each of his books. “Children Mean the World to God” is an amazing statement of God’s concern for children and was related to his serving as national spokesman for the Christian Child and Family Services Association.
Another book “It’s All about God: Including Insights from E. H. Ijams” is really two books. The story of Ijams is inspiriting, and the focus on God has a powerful message to direct lives.
Harold’s influence on the churches in Tennessee was deep and profound. My children in Nashville considered his moving to OC a great loss for the Kingdom in the South, even though they are graduates of OC.
It gave me great satisfaction when the Shanks agreed to move to Oklahoma City for Harold to serve as Old Testament professor at OC. I knew that they would enrich the spiritual life of the community, and he would build a strong foundation for Bible majors taking Old Testament courses and Hebrew.
In his years on the OC faculty, I never heard anything but praise for his courses. One semester, I asked him if I could audit his graduate course over Jeremiah.
I was impressed by his spiritual approach to the class. He took time to get acquainted with all the students, and he began each class with a time for each person to share ideas and concerns for the prayer he led each meeting. The study was carefully organized, and he pushed students to dig deeply into the text and the resources of other scholars. The course cleared many of my problems in trying to grasp Jeremiah’s story and his message.
This summer I am studying Jeremiah again, and I am depending heavily on Harold’s notes from that class.
Harold and Sally very quickly fit into life at the Memorial Road church. Sally became the lead speaker and trainer for the Center for Women’s Bible Study. He was appointed an elder and assisted with the planting of a new congregation in the Oklahoma City area. He taught frequently and preached some.
One quarter, Harold and Peter Cariaga, one of his students, taught an amazing class on the heart of God. The material of that class eventually became the wonderful book, “The Heart of God: Listening to his Heartbeat.”
The book reveals much about the heart of God and just as much about the heart of Harold Shank.
Although I am deeply pained to lose Harold and Sally from OC, and equally pained that I did not take advantage to spend time with them here, I believe that God is behind this call. The Shanks will powerfully enrich OVU and bless the Northeast.
CONTACT [email protected].