In a community grieving 26 victims, a Church of Christ opens its doors for service.

The Stockdale Church of Christ in rural South Texas was enjoying a monthly fellowship meal when the horrible news came Sunday afternoon.

Just a few miles away, a mass shooting at the First Baptist Church in the neighboring town of Sutherland Springs had claimed 26 lives and left 20 others wounded.

“We were all eating when everybody’s Facebook and Twitter feeds started to blow up,” said Kenneth Clapp, minister for the Stockdale church.

A member who serves as the justice of the peace for Wilson County — where both Stockdale and Sutherland Springs are located — got a call to respond to the scene, as did several first responders in the congregation. 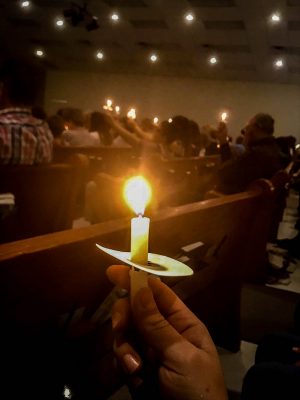 Attendees hold candles at a community prayer vigil Sunday night at the Stockdale Church of Christ in rural South Texas.

On Sunday night, the Stockdale Church of Christ hosted a prayer vigil to give its community a chance to pray and grieve together. About 150 people filled the pews.

Pastor Ray Perales from Christ United Methodist Church in Stockdale and pastor Noah Tillman-Young from Stockdale Assembly of God joined Clapp and other local residents in leading prayers at the hour-long vigil.

“A lot of it was praying for peace, comfort, to not let people lose hope or faith,” Clapp said. The shooting affected “people whose names and faces we know. It makes it very real.

“Part of it is, how can we be safe?” added the minister, whose church averages Sunday attendance of 175 to 180. “The answer is, we never truly will be, so we do the best we can. … It’s really shaken people here because there wasn’t anything anybody could do.”

The massacre disrupted life in a rural area — about 35 miles east of San Antonio — where folks still leave their doors unlocked, everybody goes to Friday night high school football games, and churches “are really a part of the social backbone,” Clapp said.

Tillman-Young said the prayer vigil at the Church of Christ was important because “there are a lot of grieving people from the community with a lot of questions, a lot of pain, a lot of anxiety.

“Last night was about bringing the community together and letting everybody know, ‘We’re all feeling those things, but the most important thing is, we serve a God who loves us,'” the Assembly of God pastor said.

Tillman-Young said his church has about 45 people “on a packed Sunday.”

“That could have been our church,” he said of the Baptist congregation where a gunman dressed in black tactical-style gear and armed with an assault rifle opened fire.

14 fatal shootings that have happened at U.S. houses of worship since 2012. https://t.co/pTvYhmRwih

At a news conference in Stockdale, Texas Gov. Greg Abbott said: “The tragedy is worsened, of course, by the fact that it occurred in a church — a place of worship where these people were innocently gunned down.”

Sunday’s shooting came exactly six weeks after eight people were shot — one fatally — at the Burnette Chapel Church of Christ in Antioch, Tenn., near Nashville.

“Our thoughts and prayers are with the First Baptist Church of Sutherland Springs, TX,” the Burnette Chapel church said in a Facebook post.

The Stockdale Church of Christ is focusing on the unmet needs of victims’ families. Minister Kenneth Clapp said this includes “costs of being in the hospital with loved ones and some help with rent, utilities and food until they are able to get back on their feet. We feel we are close enough to the situation and have enough ties to do this responsibly.” To contribute, email the church at [email protected] or call (830) 391-8088 ext. 1001.