Churches of Christ in the Baltimore area, plus other congregations across Maryland, offer a measure of hope as they work to improve their communities.

BALTIMORE — “Our city has problems, big ones,” the editorial board of the Baltimore Sun wrote recently, “and we don’t shy away from them, nor do we give any politicians a pass for failing to do as much as humanly possible to fix them.”

Racial and class inequities, blight and epidemics of lead poisoning and asthma are among the problems that plague the city of 2.7 million people, the editorial board wrote. 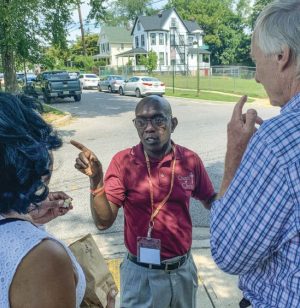 And violence. More than 150 people were killed in Maryland’s largest city through the end of June — a 17 percent increase in homicides over the same period last year, the Sun reported.

Add to that the recent war of words between President Donald Trump and U.S. Rep. Elijah Cummings, D-Md., after Trump declared the city “a disgusting, rat-and-rodent-infested mess.”

Amid the grim statistics and angry words, members of Baltimore’s Central Church of Christ presented a different view of the city during their 18th annual Community Outreach Day.

While many streets in the city’s Edmondson Village area are lined with boarded-up properties, the Central church facility is one notable exception. Hundreds of people, from seniors to small children, joined in the festivities.

Clinton Miles, a member of the predominantly black congregation, welcomed the crowds to visit a line of blue tents filled with vendors.

Inside, senior citizens listened intently during a workshop on diabetes. Small children jumped on a moon bounce, laughing and shouting to friends. Volunteers distributed food and clothing for all in need.

“The importance of this event is making the community aware of all the social services available in the city,” minister Willie Rupert said. “Being faith-based, it ties everything together because this is a partnership.”

Members of the Central Church of Christ in Baltimore host the congregation’s annual Community Outreach Day.

Public officials, including Maryland State Comptroller Peter Franchot, joined Rupert for a tour of a nearby block where the church purchased and renovated two homes.

“Given all of the crazy things that we read in the paper, these events are crucial,” Franchot said, adding that his office plans to help the church “unify the lot in front of us” and develop assisted-living communities.

“I couldn’t be happier,” Franchot said.

Another official on the tour, Baltimore City Comptroller Joan Pratt, said she was delighted to see children at the Outreach Day.

“You can see that they are having a great time,” she said. “That’s what we need — more activities for young people.”

‘IF YOU CALL YOURSELF A CHRISTIAN …’

Other Maryland congregations have hosted similar events in recent weeks for their communities.

In Camp Springs, members of the Beltway Church of Christ volunteered alongside health professionals to screen visitors at a health fair.

Meanwhile, members of the Suitland Road Church of Christ paused in cleanup efforts at their building, which sustained heavy damage during a recent storm, to host a monthly food pantry and a back-to-school event for children.

The congregation provided book bags stuffed with supplies for area students, and Suitland members spent time talking to the children as they grilled hamburgers and hot dogs and passed out snow cones.

Elder Bill Davis said the congregation didn’t dream of canceling the outreach effort just because their building was assailed by the storm.

“… how can you call yourself a Christian and don’t help somebody else?”

“If you call yourself a Christian, you have to do things that God has established,” Davis. The elder and his wife are no strangers to adversity, both having survived cancer.

“The Bible says that it is more blessed to give than receive,” Davis said. “We are a community-based church, and how can you call yourself a Christian and don’t help somebody else?”

“I am amazed,” Alsobrooks said. “Despite the devastation to their building, they held this event to support children.”