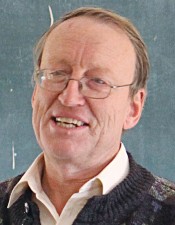 Erik Tryggestad
LUSAKA, Zambia — “Let’s face it, farming is one of the most biblical occupations we have,” Klaus Mueller tells a room full of African Christians at a ministry conference.
The German-born believer is evangelical about good agriculture — not only growing bountiful crops but pricing and marketing them with savvy.
A native of Augsburg in Germany’s Bavaria state, he moved to Zambia with his wife, Christiane, in 1979.
His parents joined the couple in 1996. Mueller’s father raised funds to build a primary school. Mueller took up farming and now directs the Twin Fountains Agriculture Training Institute near Namwianga Mission.
“He is teaching Zambians to farm, to raise cattle and chickens and to serve the Lord,” said Evertt Huffard, dean of the Harding School of Theology in Memphis, Tenn., who recently taught in Harding University’s Zambia program.
In 2011, Mueller and his family added a carpentry workshop to the primary school to teach vocational skills.
Despite widespread poverty in Zambia, unsold crops often sit on roadsides and rot. Mueller urges his students to practice competitive pricing — to feed those in need and maximize their profits.
Good agriculture isn’t limited to the countryside, he adds. Christians in Lusaka and other booming African capitals can grow flowers in small urban gardens, boosting their income and their ability to spread the Gospel.
“Don’t complain about the market being flooded,” he says. “Kill the competition. Be better competitors.”