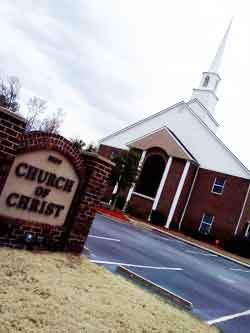 The Central Church of Christ in Martinez, Ga. (Photo via metrospirit.com)

Angel Cleary writes a “review” of the Central Church of Christ in Martinez, Ga., a suburb of Augusta, for Metro Spirit newspaper.
The reporter visited the church for Sunday worship and wrote about the experience. (We have discussed doing something similar — a sort of “secret shopper” feature on churches — here at The Christian Chronicle.)
Here’s an excerpt:

Worship was lead by a songleader who began each hymn by blowing into a pitch pipe. He sang the first couple measures or so of each hymn, starting us out at a brisk pace. There were no instruments, and we sang a cappella, like the Primitive Baptists or Mennonites, or Boyz II Men. (Don’t pretend like you don’t get the reference.)
Sometimes I can’t even hear myself sing when I visit churches with a full rock band. It was refreshing to hear full-bellied vocals in four-part harmony.
The lyrics and piano sheet music were displayed on the overheads so we could pick the part we wanted. When we joined him, we almost instantly slowed the time signature by half. We were tempo-challenged and he was so optimistic. I grinned.

Angel offers some unique perspective on our fellowship:

In the following millenia after Jesus’ death, Christianity broke into hundreds of denominations with different doctrinal focuses and different leaders. Churches of Christ believe that this disunity of Christianity displeases God and they aim to reunite Christianity under the true umbrella of New Testament practices.
The irony, of course, is that many contemporary churches feel they also have revitalized the emphasis of the early church and often call themselves non-denominational.
It’s kind of like saying Neufchatel isn’t really cream cheese. Or that an El Camino isn’t a truck. Or that a mullet isn’t a shoulder-length haircut.

Read the full story.
(Does anybody know what Neufchatel is? I am familiar with El Caminos and mullets — and I have neither.)