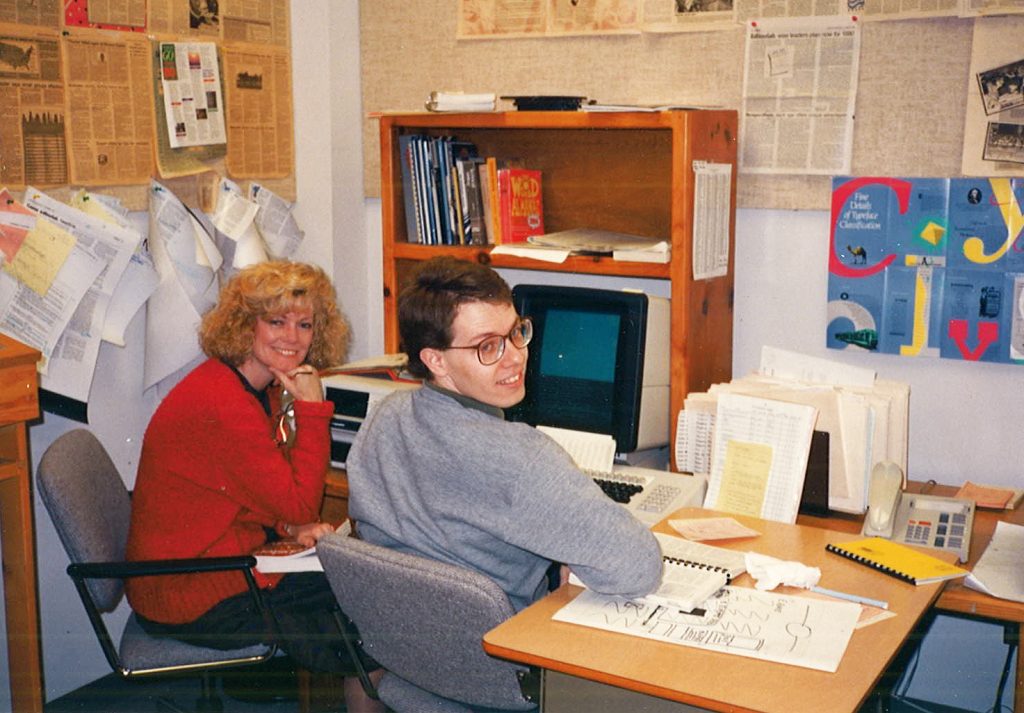 Newspaper for Churches of Christ found new life under the ownership of Oklahoma Christian University.

OKLAHOMA CITY — “We must keep the Chronicle alive!”

“We must keep the Chronicle alive!”

Beckloff and his wife, Dottie, had long been supporters of the Chronicle, a ministry launched in 1943 by Olan Hicks to serve as a news source for Churches of Christ. The newspaper had become part of the connective tissue for the fellowship of autonomous congregations. Coverage focused heavily on the global mission efforts undertaken by Churches of Christ in the postwar years.

The Beckloffs were particularly taken with the stories of phenomenal church growth in Africa. They added their own stories to the Chronicle’s pages, serving as missionaries in Nigeria until the Biafran War of 1967 forced them back to the U.S.

In the mid-1970s, as they crisscrossed the U.S. raising funds for Nigeria, they met Hicks’ son, Clark, who was publishing and editing the Chronicle. The newspaper was hurting for subscribers and funds. The Beckloffs recognized the Chronicle’s value for missionaries around the world and agreed to purchase the paper to keep it alive. They collected news, wrote stories and, in 1978, moved the ministry from Nashville, Tenn., to Oklahoma. 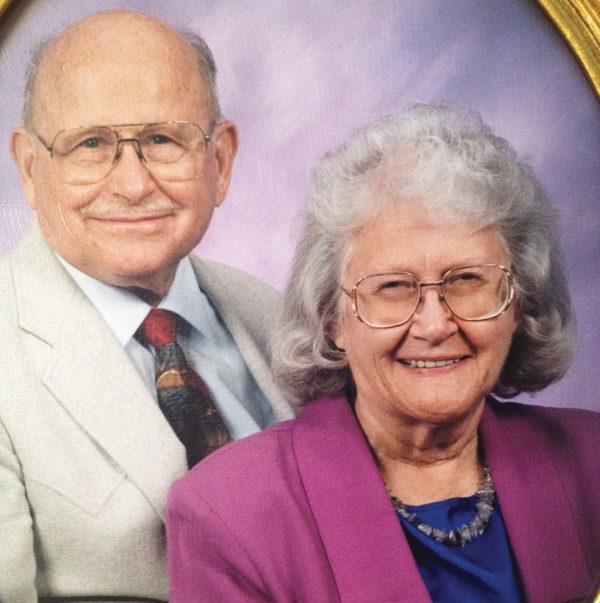 John and Dottie Beckloff owned The Christian Chronicle in the 1970s and brought the publication to Oklahoma Christian University.

John Beckloff had studied at Central Christian College, now Oklahoma Christian University. He and his wife met with potential backers, hoping to form an organization to maintain the newspaper. They hosted fundraising lunches across the state and urged Christians to “keep the Chronicle alive!”

The support they generated wasn’t enough. In 1980, the Beckloffs ceased printing their beloved newspaper. The Chronicle’s future was in doubt.

Writing on the above letterhead (address and phone numbers no longer valid) in 1980, John Beckloff turned over The Christian Chronicle’s mailing list to OC.

‘Taking it on would be a good thing’

Another former missionary, Howard Norton, also recognized the value of the Chronicle.

In the 1960s Norton and his wife, Jane, served on a pioneering mission team that planted Churches of Christ in São Paulo, Brazil. The team kept in contact with the Chronicle’s managing editor, Lane Cubstead, and the steady flow of stories from Brazil resulted in tremendous blessings for the missionaries, Norton said. 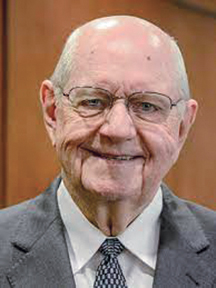 Two decades later, Norton was chair of the Bible department at Oklahoma Christian, then a college. He heard about the Chronicle’s financial woes and talked to his cousin and fellow Brazil team member, Don Vinzant, about buying the newspaper. He went to the university’s leadership for advice, only to learn that they already had agreed to take ownership of the publication from the Beckloffs.

And they needed an editor.

Terry Johnson, then the college’s president, recalled long gatherings around the conference table as he and fellow administrators considered the newspaper’s needs, the logistics of assuming responsibility for its publication and the possible impacts on the school’s mission. Ultimately, Johnson said, “We thought there was enough common interest for the college and the church that taking it on would be a good thing.” 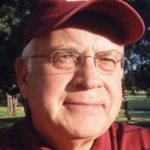 The administrators set three ground rules for the publication. First, they were “insistent that it not be a house organ for OC,” Johnson said. “We felt that would kill it if it were perceived to be a tool for the college.”

Second, the newspaper was to be a “primarily ‘good news’ paper, to be uplifting, to be helpful and edifying,” he said, “not that we wouldn’t report a story that had a negative spin. We weren’t going to go out and try to dig up dirt on people.”

Third, Johnson said, “We wanted it to be a newspaper, not just an editorial commentary.”

A new era of newsgathering

In September 1981, The Christian Chronicle returned to publication with Norton as editor and Bailey McBride, an English professor at Oklahoma Christian, as editorial consultant.

The first issue under the college’s ownership featured a front-page story about Churches of Christ sponsoring a food relief program in Poland in the midst of the country’s turbulent solidarity movement. A second piece covered a European missions seminar in Memphis, Tenn.

In a feature recounting the history of the Chronicle, McBride wrote that the paper’s rebirth “begins a new era in international newsgathering and militant evangelism.” 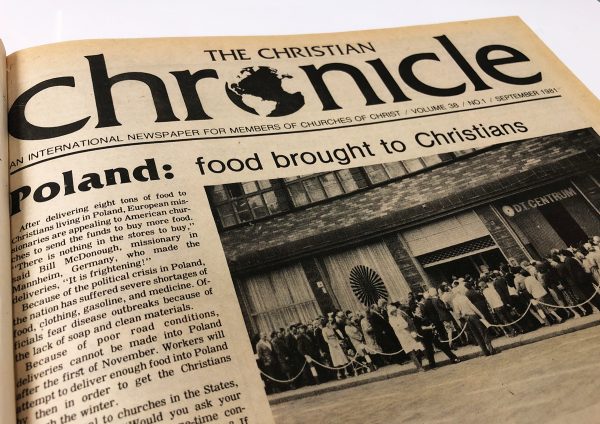 The September 1981 Christian Chronicle was the first produced under OC’s ownership.

Norton, in his first editorial, called for the church to “awaken again to its responsibility and assume its divine role as the body of Christ.”

“The church is not a political party, a civic club nor a country club,” Norton wrote. “It is to be the body of Jesus.”

“I can’t tell you how sacrificial she was,” Norton said of Johnston.

The Chronicle had about 3,500 subscribers when Oklahoma Christian restarted the publication. It operated at a significant loss through the mid-1980s, with the university shouldering the burden. In 1983, OC officials launched a National Council for the Chronicle to provide support and guidance. Church members Jack Pope, Lynn Packer and Dale Brown served as chairmen. Johnson credited them with helping the Chronicle secure its finances as circulation grew. 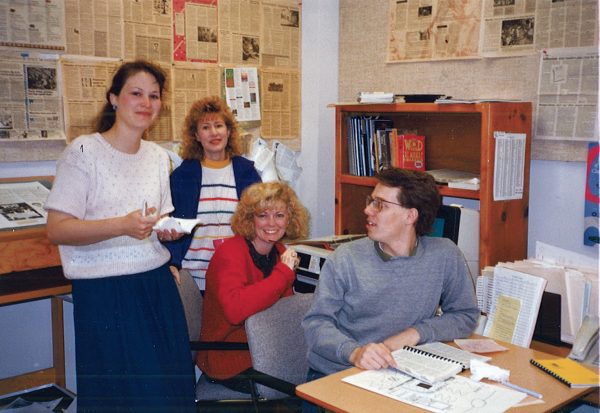 The newspaper moved from a subscription-based model to a nonprofit model, asking for donations from readers and generating additional income from advertising by Christian schools, churches and other nonprofits. Abilene, Texas-based Zachry Associates launched direct mail campaigns for the Chronicle. Congregations paid a small fee to have their membership rolls added to the mailing list. Soon, subscriptions approached 100,000. 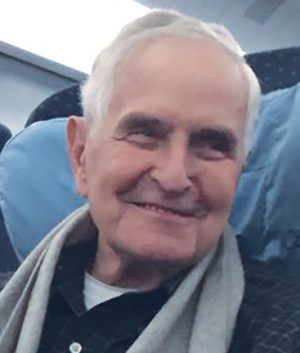 McBride succeeded Norton as editor, and Lynn McMillon, a Bible professor at OC, joined the staff as business manager. McMillon, who later served as editor, president and CEO of the Chronicle, helped guide the publication to secure financial footing. The newspaper repaid its deficits to the university and now is a self-sustaining nonprofit with its own endowment and budget.

Many other OC faculty, staff and individuals with ties to the university have worked for the Chronicle, including Scott LaMascus, Lindy Adams, Joy McMillon and Glover Shipp. In 2004, the National Council was reorganized into a Board of Trustees, with Dale Brown serving as chairman, followed by Deon Fair and Mike O’Neal. 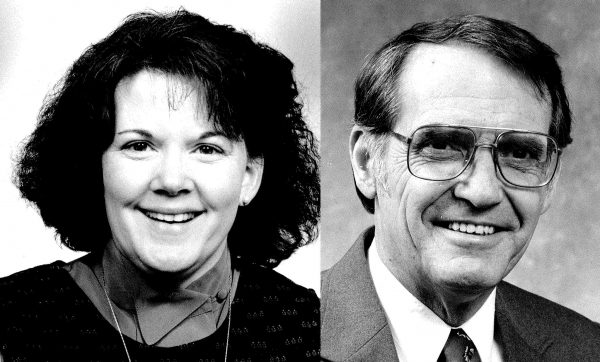 O’Neal, a president emeritus of Oklahoma Christian, said he’s glad to stand on the shoulders of the Christians who sacrificed to keep the Chronicle alive. 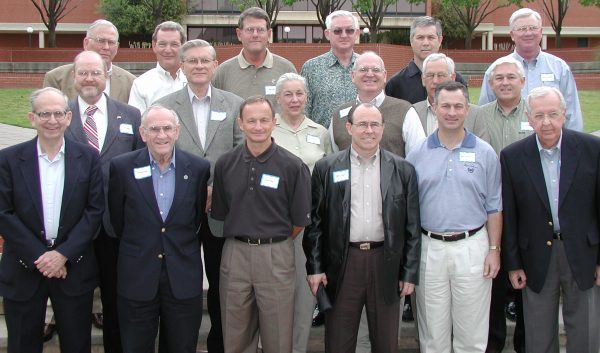 The Christian Chronicle’s first Board of Trustees, 2004.

“I am deeply grateful for the sacrifices, the courage, and the vision of those who brought it to OC and maintained it through the lean years,” O’Neal said. “Our current mission reflects the vision of the founders and sustainers — to inform, inspire and unite the fellowship of the Churches of Christ.” 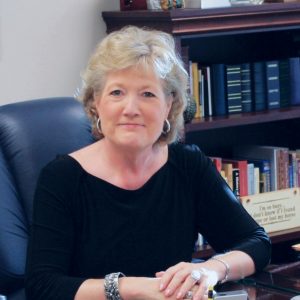 Among the latest additions to the Chronicle’s board is Lana Reynolds, president of Seminole State College in Oklahoma. For a few months in 1981, she worked with Sue Johnston as a news editor for the Chronicle.

“I do have good memories of being a part of something I felt was ‘big’ and very important,” Reynolds said. “I am proud of that brief association with the Chronicle and so proud of how far it has come.”

Four decades after John Beckloff’s urgent plea, the Chronicle is still alive, with an annual budget of about $1.3 million. The newspaper has a print circulation of 133,000 in the U.S., a website with some 75,000 monthly readers and a robust presence on social media.

Under the leadership of journalists including editor-in-chief Bobby Ross Jr., the Chronicle has received multiple first-place awards from organizations including the Associated Church Press and the Evangelical Press Association. The Chronicle competes with the largest daily newspapers in Oklahoma, including The Oklahoman and the Tulsa World, in the Oklahoma Society of Professional Journalists awards. In October, the Chronicle was named best newspaper in the state, and Ross was named best reporter by the organization.

Related: Chronicle staffers reflect on their ministry of information

John deSteiguer, current president of Oklahoma Christian, serves on the Chronicle’s Board of Trustees.

“OC is blessed to be home for the past 40 years to such a worthy publication that seeks to highlight the great things going on and, at times, the challenges being faced in Churches of Christ around the globe.”

“OC is blessed to be home for the past 40 years to such a worthy publication,” deSteiguer said, “that seeks to highlight the great things going on and, at times, the challenges being faced in Churches of Christ around the globe.”

Reflecting on the decision to take on the Chronicle, Johnson recalled the words of the late Raymond Kelcy, a longtime minister, educator and former chair of Oklahoma Christian’s Bible division.

“I remember one time he came up to me and said, ‘I think accepting ownership of the Chronicle will become one of the most notable achievements of your administration, a legacy that will live on and on,’” Johnson said. “Here we are, 40 years later. I think his prophecy turned out to be pretty true.” 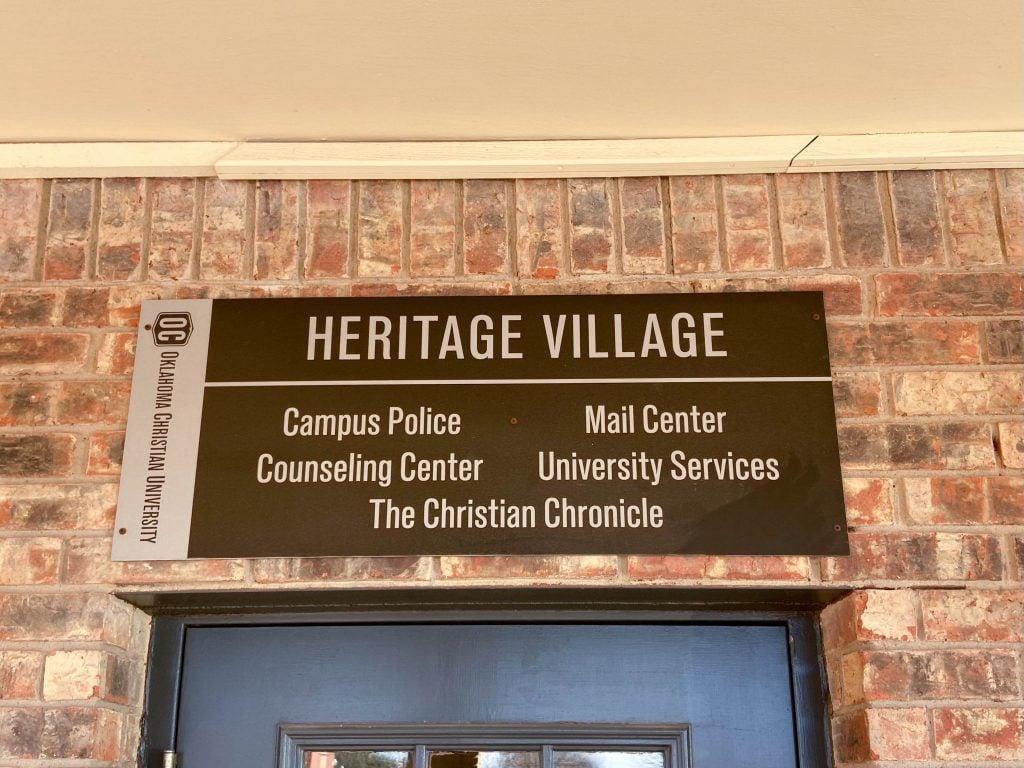 OKLAHOMA CITY — The old brick building on the edge…

We are all tired of this pandemic. The summer of… 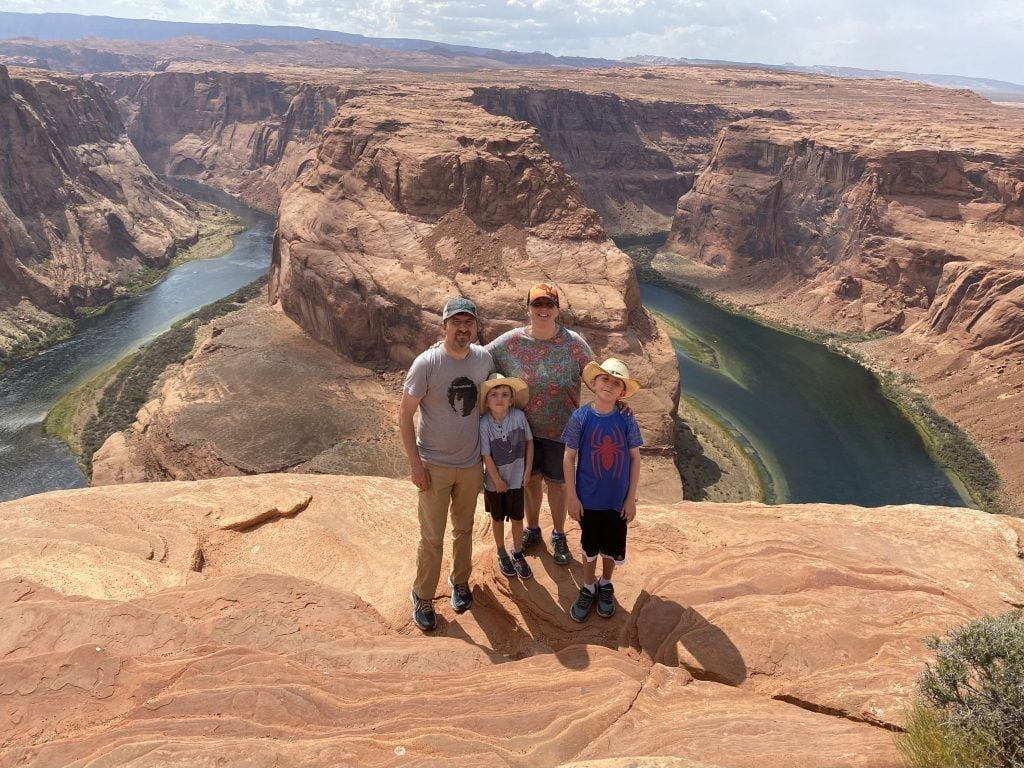 Keeping the Sabbath, taking a sabbatical

Scott Elliott, minister for the 120-member La Grange Church of…