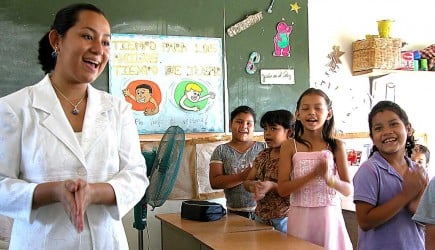 Erik Tryggestad
SAN SALVADOR, El Salvador — It’s still early on a Saturday morning, but Miguel and Alma Arguera’s restaurant is full of life – and the smells of breakfast.
In addition to the usual patrons, visitors from Nicaragua come and go. They join their Salvadoran counterparts in a staging area at the back of the restaurant, preparing stacks of flyers and assembling elaborate posters bearing phrases such as “Is Mary the Mother of God?”
Ministers from Nicaragua and the United States are joining the Salvadorans for a two-week gospel campaign, said Ermalito Sontay, minister for the 50-member Palmira church. The campaign also celebrates the launch of three churches in the San Salvador area.
The increased traffic at the restaurant keeps the kitchen staff on its toes, but Alma Arguera doesn’t forget two children sitting quietly in one of the booths. She brings them a plate of pupusas, tortillas stuffed with cheese – the national dish of El Salvador.

Roxanne, 16, and her brother Daniel, 13, are not there for the gospel campaign. They receive scholarship money through a church-sponsored children’s program directed by the Argueras and overseen by the High Pointe church, McKinney, Texas. High Pointe member Sandy Nelson, who sponsors the siblings, is in town to visit them. Nelson’s son, Jon, spent two years as a missionary in El Salvador.

For 14 years the Argueras have coordinated the program. Miguel Arguera studied at Baxter Institute, a ministry training school in Honduras. He served as a minister and taught at a preacher-training school in San Salvador, but “he wanted to do something more than preach,” his wife said.

The Argueras wanted to help underprivileged students, who often must quit school and work to help support their families. They launched the program with 12 students. Later they joined forces with the Christian Relief Fund (CRF), based in Amarillo, Texas. Today the program supports about 500 children, sponsored by CRF contributors and High Pointe members.

Alma Arguera beams as she talks about a young man – one of the program’s first – who soon will graduate from medical school. Others are studying Bible at Baxter Institute. Though the program isn’t limited to church members, “the goal is to create educated professionals in churches of Christ,” Alma Arguera said.

After breakfast, the siblings join the Nelsons for a trip to Metro Center, the largest shopping mall in the country. Jon Nelson translates as the children tell Sandy about their needs – a backpack, clothes for schools – and a few of their wants. After visits to at least five sporting goods stores, Daniel finds a baseball cap bearing the crest of his favorite soccer team from Spain.

The pristine Metro Center, complete with Payless ShoeSource and Domino’s Pizza, seems worlds removed from the humble home where 14-year-old Marla and her brother, Juan, live with their family. In fact, the two locales are only a few miles apart. High Pointe members Lynn and Martha Nored sponsor the siblings.

In addition to providing funds for education and nutrition, Marla said that the program has promoted unity within her family.

The Argueras meet with groups of the children and their parents once per month, conducting seminars that give spiritual perspectives on issues including drugs, sex and abuse. “We’re not forcing the Bible on people,” Alma Arguera said, “but (we’re) emphasizing the blessings God has given.”

Marla, Roxanne and Daniel are too young to remember the bitter years of civil war that threatened to tear their country apart in the 1980s. But the disparity between the wealthy Metro Center and Marla’s home demonstrates the circumstances that fueled the conflict. Guerillas rebelled against the government, dominated by the country’s wealthy, elite minority.

Fearing a Marxist revolution similar to Cuba, the United States backed the Salvadoran government, whose army supported right-wing “death squads” that tortured and killed suspected revolutionary sympathizers – sometimes in front of their children.

In 1992, after 70,000 deaths and $2 billion in damages to the country, a United Nations-brokered peace agreement ended the war. But the scars will take much longer to heal, said Jose Ricardo Santamaria, minister for the La Pacifica church in San Miguel, eastern El Salvador.

In some congregations, former members of the Salvadoran military worship side-by-side with former guerillas.

“Some of them have fingers cut off. Some are damaged mentally,” Santamaria said. “We try to help them through the Bible.”

Santamaria and five fellow ministers gathered on a Sunday afternoon at the 14th Street church building – one of the larger church facilities in San Miguel, a growing, metropolitan city that sits in the shadow of an impressive volcano. The ministers discussed recent developments in their congregations and future challenges.

“If you’re a preacher in El Salvador, that automatically makes you a counselor,” said Efrain Gutierrez, a minister for the 14th Street church. Some church members suffer from depression. Others have contracted diseases or suffered seemingly random heart attacks. “A lot of doctors call it the ‘post-war phenomenon,’” he said. “A lot of people have died. It can’t be explained.”

Gangs and robbery are growing concerns for church members in San Miguel, especially those with children in school. Though the conflict ended about 12 years ago, Gutierrez said, “in a way, the violence didn’t ever leave, because it (became) such a part of society …”

Despite the challenges, churches are growing in El Salvador, and building new facilities.

“El Salvador is a beautiful country of loving, caring people who suffered through an intense 10-year civil war in which almost every family was affected,” said Paul Newhouse, an elder for the High Pointe church who works closely with the church’s mission committee.

“After the war ended, a door opened for mission work,” Newhouse said. The church began sponsoring a minister in El Salvador in 1996 and currently has eight indigenous ministers under contract.

“We have planted four new congregations and intend to plant another near Santa Ana in the western zone of the country in 2005,” Newhouse said. Other churches assiting in the work include the Bammel church, Houston; the Oak Ridge church, near Ladonia, Texas; and the Selfs congregation near Honey Grove, Texas.

“High Pointe always is looking for better ways to communicate with us,” Eguizabal said. “We know that they do care.”

In 2004 High Pointe added Calvin Henry, former president of Baxter Institute, to its staff. Henry and his wife, Linda, served as missionaries in Columbia and Costa Rica. Now they travel to El Salvador every other month to work with the ministers and churches and help administer the children’s program, Newhouse said.

In about five years the population of San Miguel grew from 400,000 to 600,000, the ministers said. As the town becomes a big city, many of its residents want to go to big churches, Equizabal said. Religious movements that have established “mega-churches” in San Miguel have attracted many followers. “The more people that go, the more people want to go,” Equizabal said.

At the same time, small-group ministry has become hugely popular, but most churches of Christ don’t have enough qualified leaders to effectively maintain such a ministry. Ministers hope to establish a training school in eastern El Salvador to address the problem, Santamaria said.

The ministers said that their vision for the future includes the establishment of more churches, each with its own facility. They hope to develop strong church leaders, to make congregations less dependent on their ministers.

Argueta and church member Francisco Lovos have developed a Web site for the churches in the San Miguel area, including event listings and a “what we believe” section with information about churches of Christ.

“This started off as a Web site for the Arcos del Molino congregation,” Lovos said. “Now it is for all the churches of El Salvador.”

Newhouse said, “The work in El Salvador is a great blessing to many members of the church (in Texas), as they are able to share both God’s word and their material blessings with others.”

“We always tell our members that if they travel to El Salvador on a mission trip, it will change their lives,” he said. “Over and over again we have seen this proven true.”