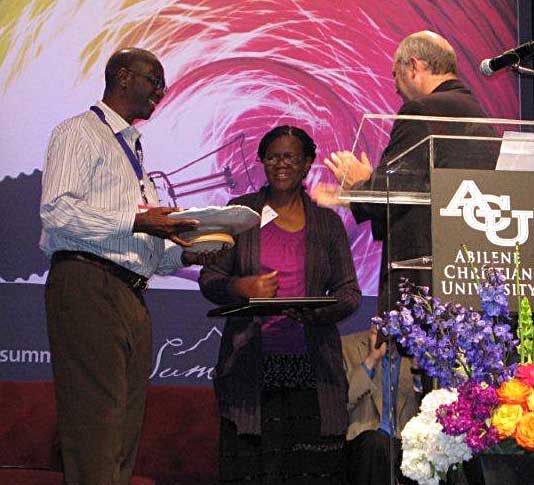 Blogging live from Abilene, Texas
Abilene Christian University kicked off its 2010 Summit lectureship Sunday with a salute to Samson — but no hair was cut and no buildings collapsed.

Samson and Elline Shandu receive the Towel Award during the 2010 Summit at Abilene Christian University. (Photo by Brad Carter)

Instead, the 4,700-student university recognized the work of Samson Shandu for 33 years of service to Manzini Bible School (now African Christian College) in the southern African nation of Swaziland.
Samson and his wife, Elline, went onstage during the first night of the Summit to receive the Towel Award. They were given a commemorative bowl and towel, signifying their servant leadership.
Last month, during my African reporting trip, I interviewed brother Samson in Swaziland on the campus of African Christian College. Here’s a blog post I filed from the college. Tonight I heard him speak at an Africa Missions Dinner at the University Church of Christ next to ACU’s campus. Earlier today he taught a class at the lectureship.
In addition to training ministers to spread the Gospel in Africa, Samson talked about giving the African preacher “something that is going to help him stand on his own.” African Christian College has launched several initiatives designed to make the campus — and its students — more self-sufficient. He wants to see the cycle of dependence on American dollars broken.
He also talked about combating a sort of culture of poverty in Africa. Many Africans see poverty as an inevitable way of life — their grandparents were poor, their parents were poor, so they expect to be poor and for their children to be poor, he said. The school seeks to empower Africans to be able to support themselves as they do the Lord’s work.
How can we help empower Christians in developing nations? How can we inspire people to better their circumstances in a way that doesn’t lead to the pursuit of wealth for the sake of wealth? Can we teach self-sufficiency and avoid “the prosperity gospel” at the same time?
I’m working on a story about new models of missions funding (ideas that include moving away from supporting individuals and instead focusing on short-term projects in partnership with congregational leaders). I appreciate your input.
Bobby Ross Jr. and I are here at ACU through Wednesday. Come by and see The Christian Chronicle’s booth in the Teague center on campus.