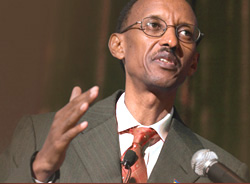 Blogging live from Oklahoma City
Paul Kagame, president of Rwanda, addressed the graduating class at Oklahoma Christian University today.
Among the graduates were 10 Rwandan students who attended OC through an international exchange program.
Oklahoma Christian currently has about 60 Rwandan students, who are studying under an agreement that they return to Rwanda and help rebuild their country, which continues to recover from the 1994 genocide that claimed an estimated 800,000 lives.
After the graduation ceremony, about 100 of the Rwandans’ families, host families in the U.S. and Rwandan government officials attended a brief prayer service on campus.
OC President Mike O’Neal said, “This is a bittersweet day for us.” Although members of the university community are proud of the 10 graduates’ accomplishments, they are sad to see them leave.
“We want to send the students off to make the world a better place,” O’Neal said, adding that this can be done only through prayer.
American Christians  have “earned no right” to tell Rwandans how best to govern their country, he added, “but we do have access to the wisdom of eternity … and we leave you with that today.”
Rwandan students presented Kagame with an Oklahoma  Christian baseball jersey. One of them, Yves Mujyambere, told the Rwandan president that he and his classmates had been good ambassadors for Rwanda in their adopted state.
“Now, we hope to be good ambassadors of Oklahoma in Rwanda,” he said.
The president’s visit wasn’t without controversy. Yesterday a Lawton, Okla., attorney filed a wrongful-death lawsuit against Kagame on behalf of the widows of two assassinated African presidents. University spokesman Ron Frost said unsuccessful attempts were made to serve Kagame with the lawsuit during the commencement, the Associated Press reported.
During graduation, six protesters with a civil rights group stood across the street from the university, holding signs accusing the president of war crimes — and accusing OC of “sleeping with the devil.” The group alleges that Kagame has violated human rights and has taken innocent lives during incursions into the neighboring Democratic Republic of Congo.
One of the protesters, Claude Gatebuke, came to the U.S. from Rwanda 15 years ago.
“From everything we see, it’s a very good school with a very good mission,” Gatebuke, a graduate of Western Kentucky University, said of Oklahoma Christian. “We’re just concerned that (Kagame’s) lack of respect of human rights is going to descend Rwanda into another genocide.”
At the prayer service, Sam Shewmaker, facilitator for African church planting for Texas-based Missions Resource Network, prayed for peace during Rwanda’s upcoming election in August.
“We ask, oh God, to turn anxiety into peace,” Shewmaker prayed.
Shewmaker, who lives in Rwanda, also asked God to “bless the people of Rwanda who still harbor hatred and anger. Turn it into the ability to rebuild the nation of Rwanda in peace.”
Kagame’s visit came two days after he spoke to students at another academic institution associated with Churches of Christ — Greater Atlanta Christian School.