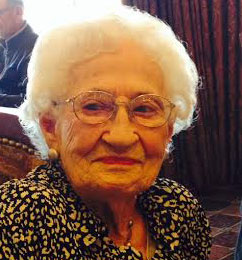 As a Christian woman, she saw the beauty of God’s world in people, flowers and nature. She was a faithful member of the Church of Christ in Muskogee, serving as an elder’s wife, mentor, children’s Bible school teacher and hostess to the loveliest wedding and baby showers. She was known for her gracious hospitality, beautiful gardens and strong faith.

Ruth blessed friends and family with flowers, plants and produce for decades. She and her husband were strong promoters of Oklahoma Christian University, where Vic was one of the original incorporators and trustees.

Ruth was an active volunteer —beginning with making bandages for soldiers during World War II. She volunteered at the Five Civilized Tribes Museum, Volunteers of America, Muskogee Regional Medical Center and served faithfully as a member of the Chandler Road Church of Christ in Muskogee.

During the last year of her life, she was not only loved by her family and friends, but also by her new friends and caregivers at Aberdeen Heights Assisted Living, Seasons Hospice and at Clarehouse.