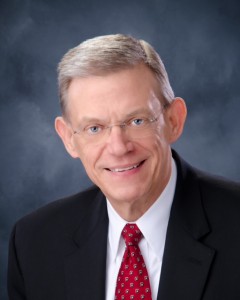 Rubel Shelly to step down as Rochester College president

Rubel Shelly will step down next year from the presidency of Rochester College in Michigan.
The Christian college, which is associated with Churches of Christ, reports on its website:

William Anderson, chairman of the Board of Trustees of Rochester College, has announced the beginning of a national search to secure a qualified, experienced and visionary president for the college. The target date for announcing the presidential selection is late Spring 2013, with his or her service to begin in Fall 2013.
At the January 2012 meeting of the Board of Trustees, Dr. Rubel Shelly requested the board initiate a presidential search that would allow him to step away from the president’s role as early as Sept. 1, 2013.
Shelly assumed the role of interim president in Spring 2008, and, at the board’s request, has continued to serve as president during a challenging period of transition in the college’s history. “Dr. Shelly’s tenure has not only witnessed a solidifying of the financial footings of Rochester College but, through his leadership, the college has achieved significant academic and enrollment milestones,” Anderson said.
Under Shelly’s leadership, Rochester College has increased its enrollment from 850 students to just over 1,200 at the start of the 2012-13 academic year. During the same period, the college established a School of Nursing in collaboration with Crittenton Hospital and Medical Center. The School of Nursing has achieved Commission on Collegiate Nursing Education accreditation.

Shelly intends to assume the role of chancellor, oversee the transition of leadership and “return to his most cherished roles of teacher-author within the college community,” according to the release.
Read The Christian Chronicle’s July 2011 front-page story on the future looking brighter at Rochester College.