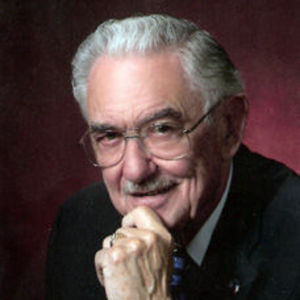 Submitted
Roy F. Osborne, Jr. was born to Roy Franklin and Nonie Osborne on Dec. 28, 1922, in Nashville, Tenn. Roy began preaching the week of his 17th birthday in 1939. He was married to Nova Dene Potts from 1947 until her death in 1981, and together they raised four children.

Roy attended David Lipscomb College, Abilene Christian College and the University of Denver, receiving his degree from the University of California at Berkeley where he did both undergraduate and post-graduate studies in clinical psychology. He served in the Army Air Corps in World War II and in the Air Force during the Korean conflict.

Roy served as the regular pulpit minister for congregations in central Florida; Denver; San Leandro and San Francisco, Calif.; and finally, San Antonio, where he retired in 1991 after 21 years as the senior minister for The Sunset Ridge Church of Christ.

During his time in San Francisco, he also taught at San Quentin Prison for six years and served on Gov. Ronald Reagan’s committee on drug abuse and rehabilitation. Roy served on the development boards for the Baxter Institute in Tegucigalpa, Honduras, the Austin Graduate School of Theology in Texas and Pepperdine University in California. He was the recipient of the Distinguished Christian Service Award from Pepperdine in 1992.

During his 70 years of preaching, Roy held gospel meetings in almost every state of the union and taught in Central America and Europe. He is the author of the book, “From the Mountain to the Cross,” originally published in the series called “Great Preachers of Today.” He continued preaching, teaching and publishing essays on biblical themes reaching hundreds of subscribers in 31 states, the District of Columbia and several foreign countries until the time of his death.

Preceding him in death were his parents; his only brother, Don; his oldest son, Mike; and his wife, Dene.

Roy is survived by his son, Don Osborne, and his wife, Judy, of New Braunfels, Texas; daughter, Victoria Dene Berman, and her husband, Henry, of Discovery Bay, Calif.; son, Barry Osborne of Pittsburgh; daughter-in-law, Diane Osborne of New Braunfels, Texas; and his companion of more than 20 years, Margaret Preston of San Antonio. In addition to his three children, Roy leaves nine grandchildren, 12 great-grandchildren and one great-great-grandchild.