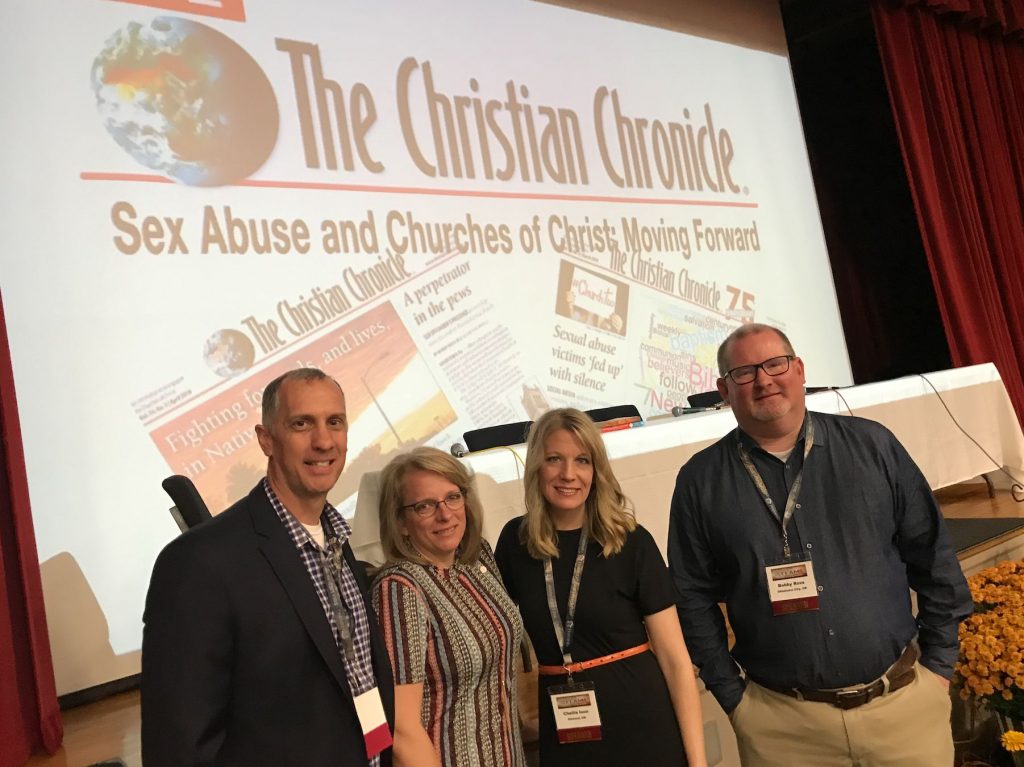 The “Christian Chronicle Live” dialogue followed our front-page report from Uniontown, Pa., earlier this year on “A perpetrator in the pews.”

I moderated the sessions, which featured experts Christine Fox Parker of PorchSwing Ministries, Steve Black of the Ezekiel 33 Project and Chellie Ison of the Chronicle. Besides serving as our digital news editor, Ison — with her husband, Nathan — leads the Celebrate Recovery ministry at the Memorial Road Church of Christ in Oklahoma City.

• Listen to part one on responding to the needs of victims:

• Listen to part two on preventing sexual crimes from occurring:

Also during the lectureship, I was blessed to discuss the Chronicle during an alumni luncheon of the Harding School of Theology. I talked about “Ten stories for church leaders to read.”

Dr. Jim Martin interviews ⁦@bobbyross⁩, Editor In Chief of the ⁦@CofCnews⁩, during the ⁦@hst_edu⁩ Luncheon at the ⁦@HULectureship⁩ today on the topic of “10 Christian Chronicle stories for church leaders to read.” pic.twitter.com/9HbaE9jNQS

• ‘I love you as a person, and I don’t wish anything bad on you’: Botham Jean’s brother asked the judge for permission to hug Amber Guyger in the courtroom after sentencing. Chellie Ison reports.

In the final moments of the trial, Botham Jean's brother offers forgiveness and a hug to Amber Guyger.

Posted by The Christian Chronicle on Wednesday, October 2, 2019

• Botham Jean’s alma mater pauses to remember, pray after Amber Guyger’s murder conviction: “He left an impression on everybody here,” Harding President Bruce McLarty said at the lectureship, as I note in the story.

• Hug seen around the world: I offer my take on Brandt Jean’s forgiveness of his brother’s killer in this post for GetReligion.org.

Stunning.Absolutely stunning.That’s the only way to describe what happened in a Dallas courtroom Wednesday.

• Nikki Haley speaks at Faulkner University benefit dinner: The former South Carolina governor and U.S. ambassador to the United Nations gave the keynote address at Faulkner, a Montgomery, Ala., university that is associated with Churches of Christ.

• Was it right for the judge in the Amber Guyger case to talk religion and give her a Bible?: “Religious leaders differ on whether State District Judge Tammy Kemp should have given Amber Guyger her Bible in court following the sentencing as opposed to in private, but none doubted her intentions during the emotional trial,” the Dallas Morning News reports.

Was it right for the judge in the #AmberGuyger case to talk religion and give her a Bible? https://t.co/jmlFCHNP0P

• Campaign 2020 question: Do Christians see a difference between cussing and profanity?

I can’t remember when I have witnessed such complete silence in chapel as I did today when we watched the video of Brandt Jean speaking amazingly gracious words of forgiveness in a Dallas courtroom yesterday. The entire world is marveling today at what Brandt said and did. pic.twitter.com/Yih8kSxV0A