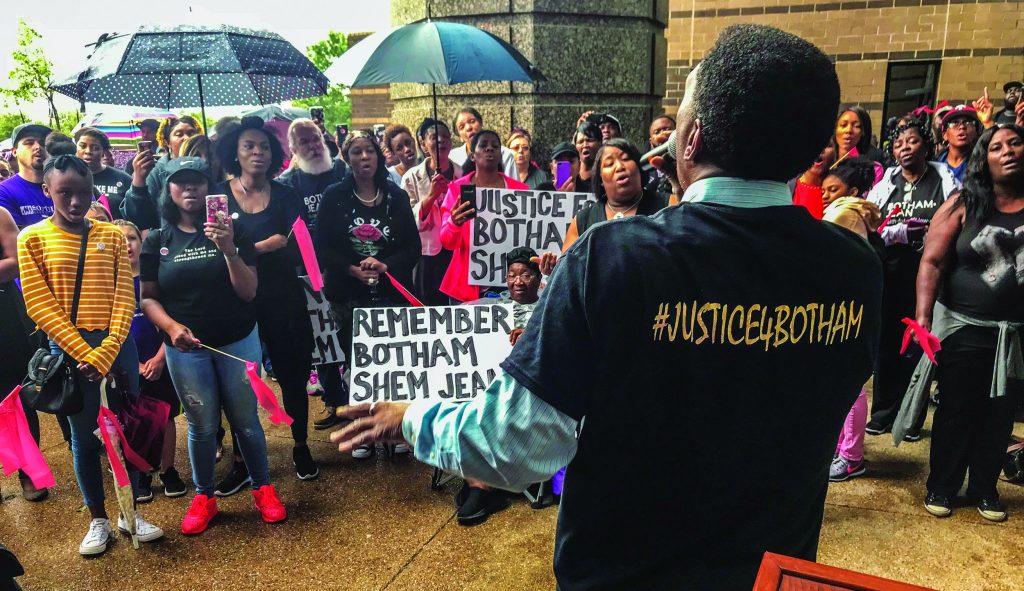 Today marks a sad milestone for loved ones of Botham Shem Jean.

It’s the one-year anniversary of the faithful Christian’s shooting death by a Dallas police officer who claims she mistook his apartment for her own.

Today, September 6, 2019, we have reached a milestone that we have been dreading. Today makes a year that Botham was so violently taken from his family, friends and life.Our ask of all of you today is to post or share a photo of Botham whether you knew him personally or not. The world deserves to remember his smiling face.Wear red, as it was his favorite color for the world deserves to see the color that brought him joy.Do a good deed for a neighbor as Botham would have wanted us all to do.And before you lay your head down at the end of September 6th, say a prayer for the family. Lift them up in prayer as Botham has done for so many during his short time on this earth.We ARE our brothers keeper.We WILL keep saying his name.We DEMAND justice.If only heaven had a phone.#bothamjean#bothamshemjean#justiceforbotham#justiceforbothamshemjean#belikebo#itsonus#blacklivesmatter#iammybrotherskeeper#istandforbotham#sayhisname#thebothamjeanfoundationinc#Bothamsarmy#teampwc#togetherwecan#becauseofthemwecan#bjfgala#redtie4Botham

Posted by The Botham Jean Foundation on Friday, September 6, 2019

Among The Christian Chronicle’s coverage over the past year: my interview with Jean’s parents about their nightmare that never goes away and our coverage of Christians nationwide asking God to bring #Justice4Botham.

• Healing Hands raising funds to help after Hurricane Dorian: The Nashville, Tenn.-based humanitarian aid organization, which is associated with Churches of Christ, is organizing relief efforts for the devastated Bahamas. Chellie Ison reports the latest details.

Your help is needed in the Bahamas! Please follow this link to GIVE today as we prepare shipments of relief supplies for those affected by this devastating storm. https://t.co/v1g4PQ3vRM #PrayfortheBahamas pic.twitter.com/ezwLUeH4Qm

• ‘The blessing is ours’: A Venezuelan diaspora is spreading across South America as refugees from the troubled nation find new homes and reinvigorate the Churches of Christ that take them in. In the first of a two-part series, Erik Tryggestad reports from Santiago, Chile.

• Freed-Hardeman University smashes enrollment records: As the university in Henderson, Tenn., celebrates its 150th year of offering Christian education, it has a record-breaking 2,117 students, an increase of 100 over last year, according to President David Shannon. Our own Erik Tryggestad was at FHU this week.

From Erik: I had a great visit with great people at Freed-Hardeman University. They welcomed me (even though I’m a Lipscomb grad!) and asked me to read Scripture during chapel when my longtime friend from Benin, George Akpabli, spoke on his ministry in West Africa. I saw a Lipscomb classmate (now a professor at FHU), a friend from the Long Island Church of Christ (who CAN’T be old enough to be in college!) and met a bunch of great folks. I’m most thankful to my hosts, Milton and Laurel Sewell. Thrilled to have brother Sewell on the Chronicle’s board of trustees! #freedhardeman #freedhardemanuniversity #lipscombuniversity #christianchronicle #churchofchrist #christianuniversity #christianeducation

A post shared by The Christian Chronicle (@christianchronicle) on Sep 5, 2019 at 9:45am PDT

• Mountain States Children’s Home looks to expand programming for high school graduates: “There is a tremendous need for this kind of care,” executive director Randy Schow tells the Longmont Times-Call in Colorado. The children’s home is supported by Churches of Christ.

• Tennessee church shooter given hundreds of additional years in prison: Already sentenced to life in prison for the murder of church member Melanie Crow, the gunman who opened fire at the Burnette Chapel Church of Christ in Antioch, Tenn., two years ago faced punishment this week, The Tennessean reports.

• For Oklahoma Sooners, first regular-season game on Sunday combines two faiths: What happens when a major college football game is scheduled on the Lord’s Day? The Oklahoman’s Jenni Carlson delved into that question in a recent front-page news-feature.

• September marks the 20th anniversary of Wedgwood church shooting in Fort Worth, Texas: The gunman took seven lives at the Baptist church “before he detonated an explosive device and killed himself in front of more than 200 worshipers,” as the Fort Worth Star-Telegram recalls.

Finally, pray for those on North Carolina’s Outer Banks

Members of the Outer Banks Church of Christ in North Carolina pray for minimum impact by Hurricane #DorianNC. Photo by…