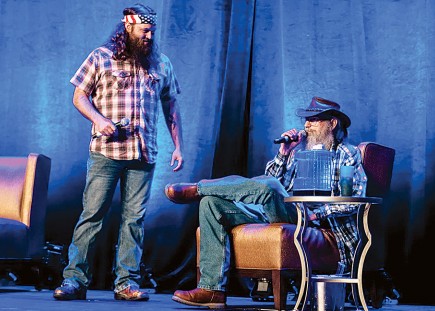 Robertsons on the road

STAFF REPORTS
‘The Bible is a weapon of mass instruction and a love letter from God Almighty.”
So said Jase Robertson, a star of the hit reality series “Duck Dynasty,” speaking to 2,500 students, faculty and alumni at a recent Oklahoma Christian University chapel assembly. Robertson came to the Oklahoma City university with his wife, Missy, and their three children.
He did a video shoot with Oklahoma Christian President John deSteiguer in the university’s duck pond.
In the interview with deSteiguer, Robertson shared that he never thought “Duck Dynasty” would make the splash it has — much less become a megahit.
“I said, ‘This will never work.’ I just didn’t think that people would want to watch a bunch of bearded, what-we-call ‘rednecks’ down on the riverbank just doing what we do,” Robertson said. “But to my surprise, there’s evidently a lot of people watching it.”
The Robertsons, all members of the White’s Ferry Road Church of Christ in West Monroe, La., have become popular guests at Christian universities.
A benefit event for Faulkner University in Montgomery, Ala., drew more than 3,000 “Duck Dynasty” fans on a recent Saturday night.
The appearance by Willie Robertson and his uncle Si raised money for Faulkner’s advancement program and scholarship program.
Later this spring, Duck Commander Phil Robertson will headline fund-raising events for Freed-Hardeman University in Henderson, Tenn., Lipscomb University in Nashville, Tenn., and Lubbock Christian University in Texas.