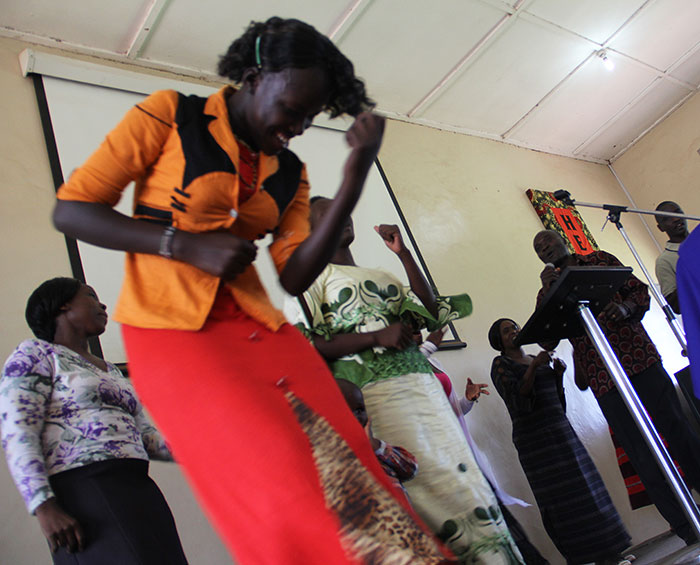 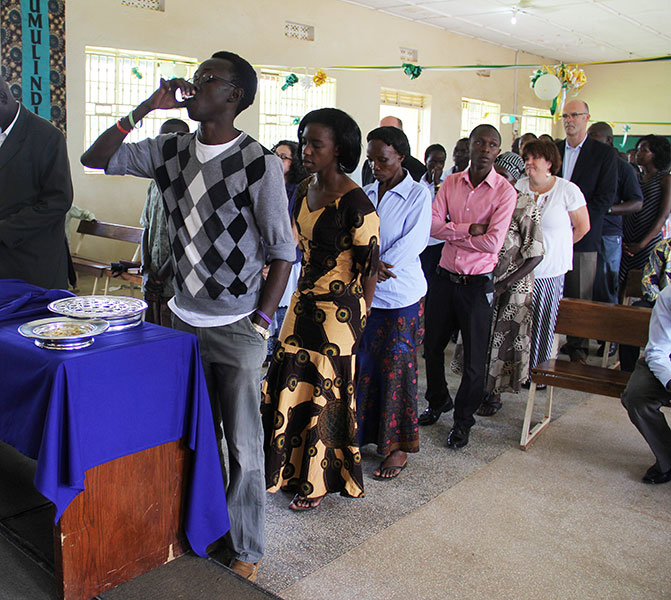 Christians take communion during Sunday worship at the Mbale Church of Christ, which shares its facility with LivingStone International University. (PHOTO BY ERIK TRYGGESTAD)

KAMPALA, Uganda — I’m sorry for the pun. Sort of.

But I’m also happy. It’s hard to express the joy of finding familiar faces across an ocean from home.

I have just arrived in the capital city of Uganda, a nation of 36.4 million souls, after spending four days visiting LivingStone International University in the eastern city of Mbale. 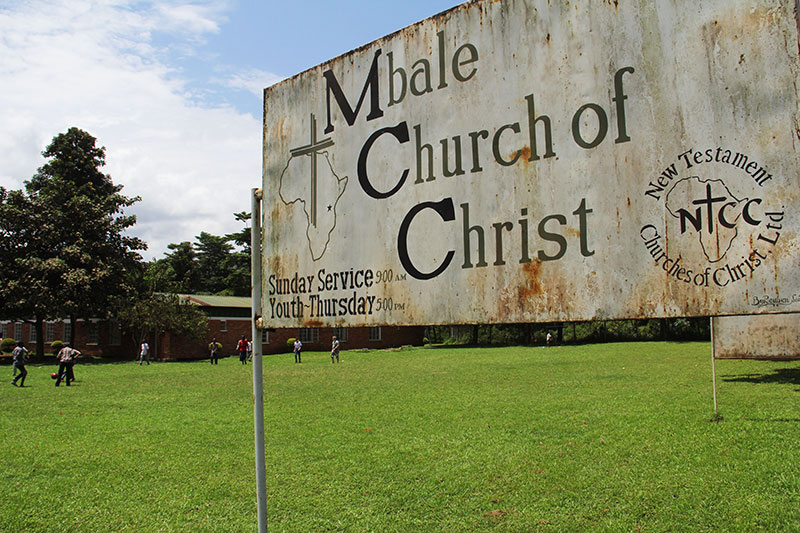 Children play soccer after Sunday worship at the Mbale Church of Christ. (PHOTO BY ERIK TRYGGESTAD)

The university, launched four years ago, is a joint effort by Churches of Christ and Christian Churches to produce Christ-led, spirit-filled graduates in fields including information technology, business administration and media production. (I was privileged to speak to a class on news editing. The students asked some great questions — from headline writing to media ethics.)

I got to hear some of the students’ background stories. One lived through the terrors of the Lord’s Resistance Army, the gang of child soldiers led by Joseph Kony in northern Uganda. Another is an orphan from faraway Sierra Leone — who can’t return home due to the recent Ebola outbreak. She’s exceptionally good at a card game called “Spoons.” (I’m not.) 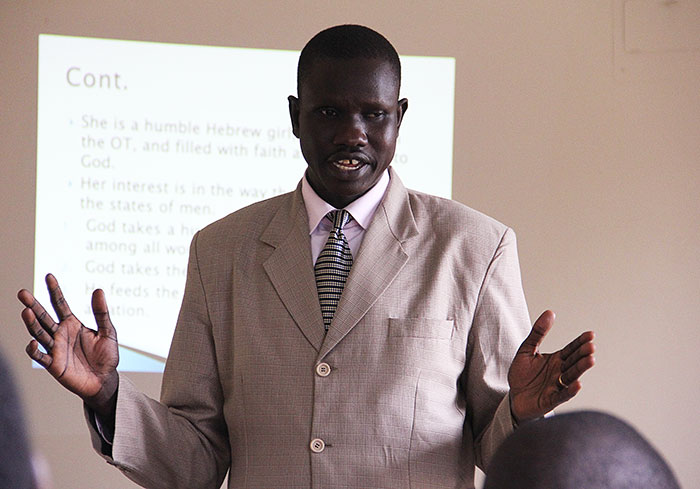 Their instructors’ lives are no less fascinating. I sat in on the “Life of Christ” class taught by Zechariah Manyok Biar, a graduate of Abilene Christian University in Texas. I met him in 2011 in Juba, the then-soon-to-be capital of South Sudan. (See my report from that visit .) Once a child soldier — and a dodger of crocodiles — he was an official with the South Sudanese government when I met him. He — and his country — have since endured terrible suffering . He moved to Uganda to teach at LivingStone. Recently, he  wrote an opinion piece about his native country’s recent troubles. 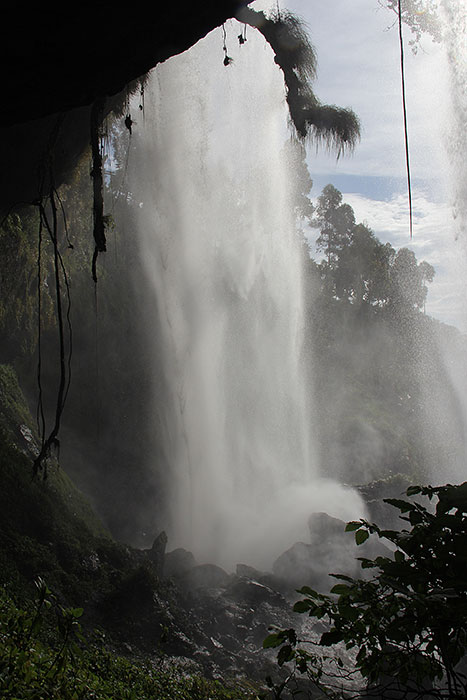 Looking out from behind a waterfall at Sipi Falls, near Mbale, Uganda. (PHOTO BY ERIK TRYGGESTAD)

I was equally thrilled to spend some time with Dennis Okoth, a longtime minister in Kenya who serves on the board of LivingStone and oversees Messiah Theological Institute in Mbale. (The institute shares its campus with LivingStone, which eventually will move to a large piece of property just outside Mbale.)

Brother Okoth is a man of great experience and wisdom. He works with nearly 300 churches — many of them rural — throughout the region.

In 2011, as we were preparing to conclude our Global South series, Okoth submitted a Views column titled, “In Africa, foreign support may rob God of his role as sustainer.”

To date, it remains my all-time favorite Views piece. Here’s a snippet:

In my years of experience as an educator and counselor, I have come to see clearly that some of my well-meaning brothers and sisters of the faith view God as an instrument of manipulation to meet their daily needs — a cash cow of some sort. They see the Almighty as someone who must be impressed to milk out material gains under the guise of a Christian ministry or project.

Some of my countrymen have started their own business enterprises and tagged them as “Christian ministries” in order to draw foreign financial support. To them, keeping their wallets continuously lined with the dollar is a sure way of making ends meet.

Deserving, needy children in our societies have been used as bait to win foreign sympathy and support in order to earn a healthy living.

Loving the poor truly is inherent to following Jesus Christ. But I have seen the dignity of many African Christians destroyed when they become dependent on foreign support.

Okoth’s position may not be a popular one, but, Uganda, give him some credit for his forthrightness.

That’s the last pun, I promise. 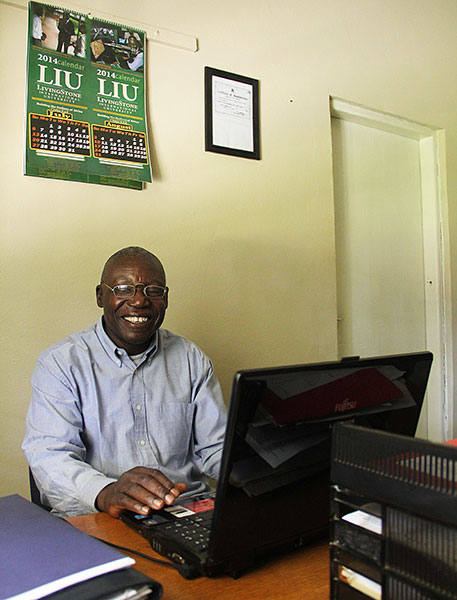 Dennis Okoth in his Mbale office. (PHOTO BY ERIK TRYGGESTAD)