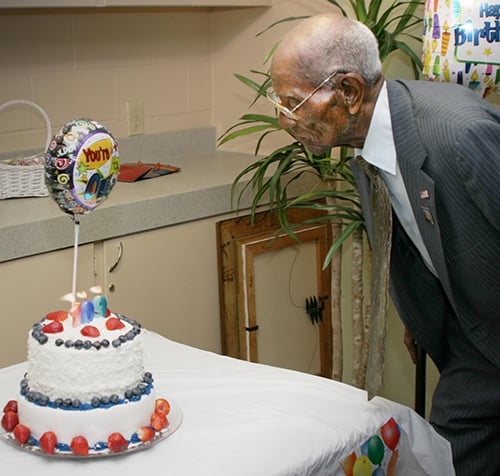 Submitted
You may not have known this interesting little truth, but one of your oldest brothers in Christ is America’s oldest-living World War II veteran, Richard Overton. His 109th birthday was celebrated on Mother’s Day, May 10, at the Church of Christ in Hyde Park, Austin, Texas.

Richard Overton served in the South Pacific during the war. He has been honored many times in recent years, even being honored by President Obama during a ceremony at the World War II Memorial in Washington. But the greatest honor he has experienced was his baptism into Christ during the summer of 2014. He was 107 years old when he was born again.

Until recently, Richard drove his own pickup truck to worship services every Sunday. Though his mind is still as sharp as a tack, he says he feels weak at times but assures everyone he is fine.

As late as last summer he was still mowing lawns for “widow women” in his neighborhood because, he says, they were too old to do it themselves. We look forward to his 110th birthday in May 2016 and are pretty sure he will be there for it.