Despite sacrifices, minister reaps a harvest of blessings with a 200-year-old congregation.

BEALLSVILLE, Ohio — Just after 9 a.m. on a recent Sunday, the well-worn tires on Jeff Rich’s 2003 minivan crunch over a gravel road full of twists, hills and narrow lanes.

THIRD IN A SERIES

Already up for hours, the Beallsville Church of Christ minister just finished leading worship for a half-dozen residents of the Monroe County Care Center.

After leaving the nursing home, Rich stirs up a cloud of dust as he drives through farming and coal-mining country to pick up folks for the church’s regular assembly.

“Good morning, Paul!” the minister says as one man climbs into the van. “How’s your mother? Her knee doing any better today?”

For more than a dozen years, Rich has preached full time for this southeastern Ohio church — a 100-member congregation that meets in a large, red-brick building just off State Route 145. 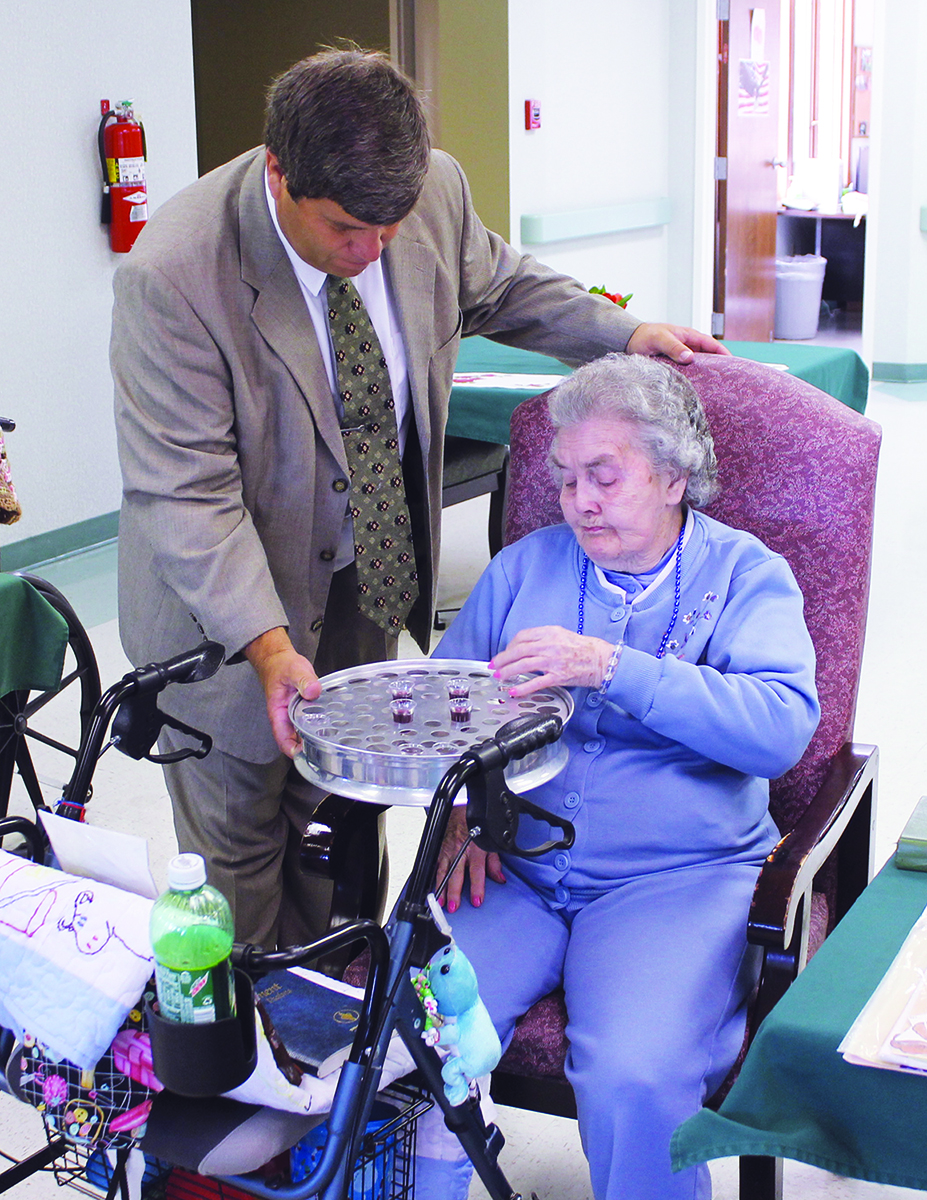 It’s no cushy preaching job, by any means. But Rich treasures the peace and presence of God he has found in a part of rural America others might see as depressed or declining.

Christians who gathered in homes and barns formed the Beallsville church in 1813 — 200 years ago.

It’s the oldest Church of Christ in Ohio and has deep roots in the Restoration Movement, also known as the Stone-Campbell Movement.

Alexander Campbell, one of the founders of the 19th century movement to restore the original pattern of Christianity as seen in the New Testament, lived in Bethany, W.Va., about 50 miles northeast of Beallsville.

Monroe County, where Beallsville is located, boasts less than 15,000 residents.

Yet 30 Churches of Christ — most small and struggling — dot the county’s 450-square-mile landscape.

“The extremely high number of congregations in such a small geographical area obviously had to do with our proximity to the Campbell movement,” said Bryan Truex, who grew up in the Beallsville church.

“In the early days of the 1800s, a horse and wagon could only carry a family so far on a Sunday morning,” he added. “Even after the automobile reached the county … commuting longer distances to church never caught on.”

“In the early days of the 1800s, a horse and wagon could only carry a family so far on a Sunday morning. Even after the automobile reached the county … commuting longer distances to church never caught on.”Bryan Truex, who grew up in Beallsville

LIVING OFF THE LAND

Jeff and Crystal Rich met and fell in love in the early 1980s.

She was a high school student who attended the Belpre Church of Christ in Ohio. He was a Bible major at Ohio Valley University, across the Ohio River in West Virginia.

After Jeff Rich finished OVU, the couple moved to Memphis, Tenn., where he pursued graduate studies at Harding School of Theology. They later served congregations in Illinois, Michigan, Kentucky and elsewhere in Ohio before moving to Beallsville in 2000.

Here, the Riches and their two younger children, Don, 18, and Deauna, 15, reside in a church-owned home just down the hill from the building.

To find their place, slow down at the yellow “tractor crossing” sign and turn left by the trees. Watch out for Amish buggies on the highway.

A sheep grazes in a fenced area outside the two-story frame house. When Jeff Rich steps out of his vehicle, chickens that the family hatched rush to him.

On this Sunday, Crystal Rich makes a breakfast casserole with fresh brown eggs. She prepares lasagna for lunch using tomatoes grown in the family’s garden.

The Riches cite physical and spiritual reasons for living off the land.

On the physical side, they struggle to make ends meet.

“We pinch,” agreed his wife. 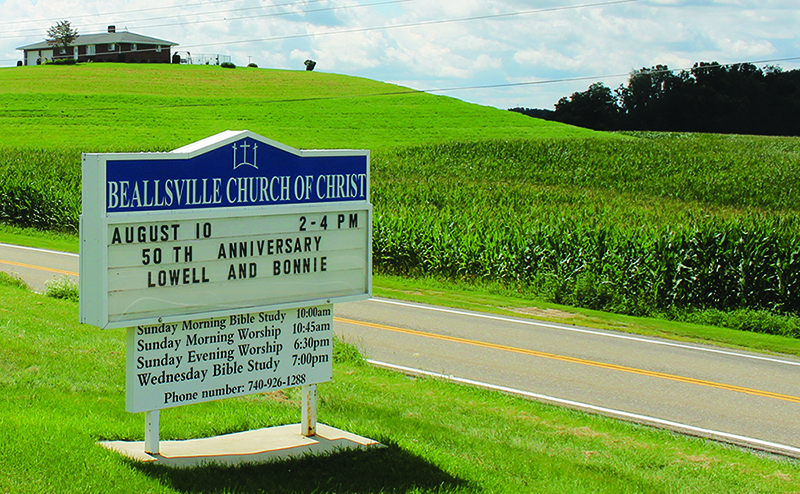 Corn grows in a field across the highway from the Beallsville church, which meets in a red-brick building that opened in 1974. (PHOTO BY BOBBY ROSS JR.)

The Riches, whose son Don has Down syndrome, can’t afford traditional health insurance. Medical expenses add to the family’s cost of living.

“Jesus told the disciples to pick up the fragments, and they gathered 12 baskets,” Crystal Rich said. “He did not want waste, among other lessons.

“We are frugal, and God has blessed us to be able to help others who have less,” she added. “We do what we can with what we have been entrusted and have never known want of any need.”

On the spiritual side, Jeff Rich — who occasionally teaches at the West Virginia School of Preaching — said he always urges young preachers to plant something wherever they go.

If Jesus were to visit the Riches, he’d find plenty of trees bearing fruit — including peaches, apples, cherries and berry vines.

“It’s a way of saying to the congregation, ‘I’m going to be here for a long time, and I want to see things grow,’” Jeff Rich said.

“We are frugal, and God has blessed us to be able to help others who have less. We do what we can with what we have been entrusted and have never known want of any need.”Crystal Rich, minister’s wife

A FOCUS ON THE BIBLE

In its heyday, the Beallsville church drew Sunday crowds topping 250.

Tom Butterfield, director of church relations at OVU, preached for the congregation from 1968 to 1975. 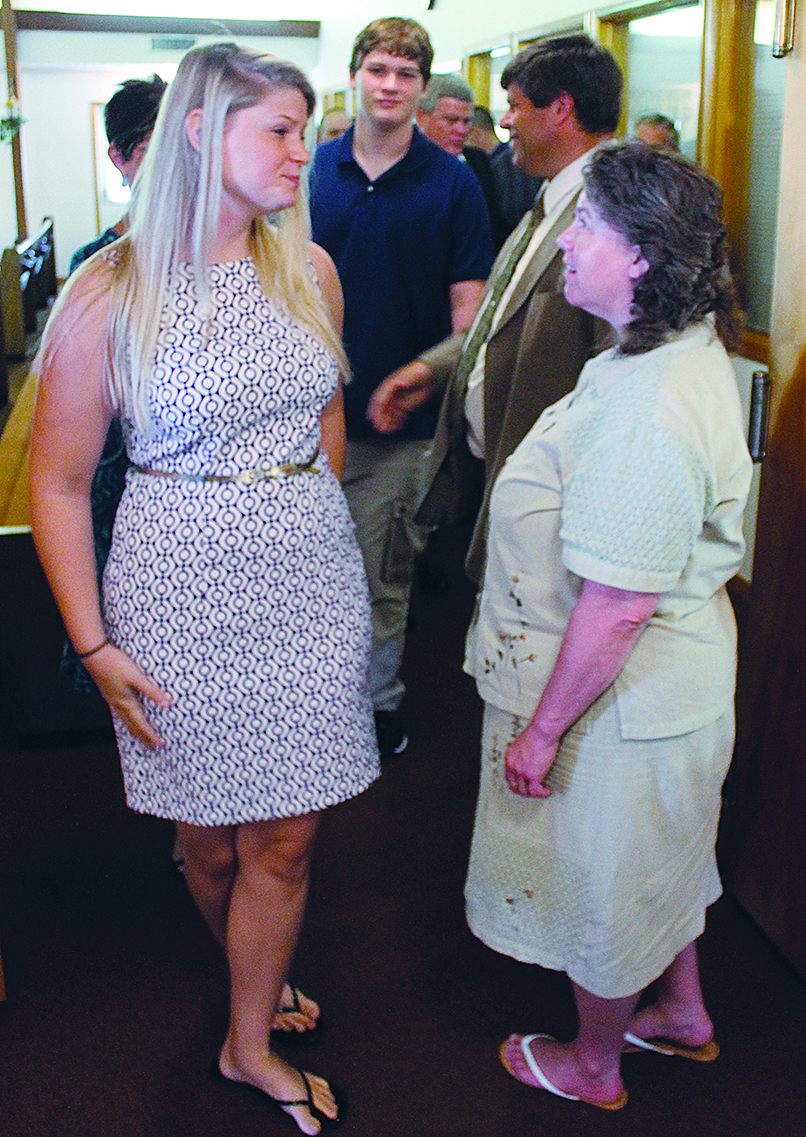 Jeff and Crystal Rich, right, greet members as they leave the auditorium after a Sunday assembly. (PHOTO BY BOBBY ROSS JR.)

During a gospel meeting, so many crammed into the church’s old, wood-frame building that a floor beam broke.

“That put some impetus in our building program,” Butterfield said. The brick building where the church still meets opened in 1974.

In recent times, Monroe County’s economy has suffered as the result of an aluminum plant’s downsizing and coal-mining industry cutbacks.

“At a certain time around here, the economy kind of fell apart,” said Bryan Marcum, 51, a Beallsville member who works at a power plant more than an hour away.

“At a certain time around here, the economy kind of fell apart.”Bryan Marcum, church member

Even in the darkest times, Jeff Rich sees the fields as “white unto harvest.”

The minister seldom takes a day off.

“He’s supposed to have at least one day off, but he’s on 24-hour call,” Crystal Rich said. “When people need him, he’s there.”

Since most churches in the county do not have full-time ministers, many members see Rich as their preacher, too, and expect him to visit sick relatives, perform weddings and help with funerals, he said.

Besides his church work, Rich serves as a substitute teacher in the public school system — a second job that helps pay his Social Security taxes, he said.

The preacher also volunteers with the Beallsville Blue Devil football team — an undertaking that endears him to the close-knit community.

“Everyone around knows who Jeff Rich is,” his wife said. 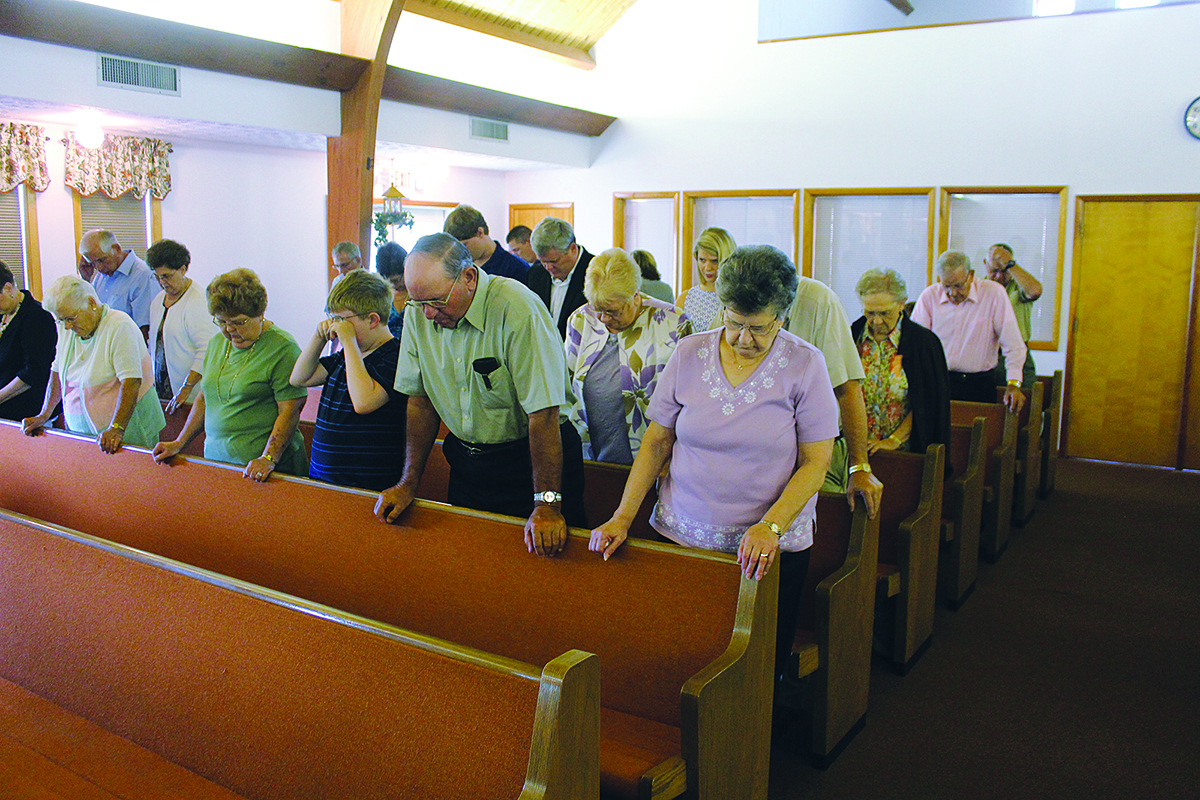 Members pray during a Sunday morning worship assembly at the Beallsville Church of Christ. Known to  local residents as “the church up the hill,” the Ohio church is about 15 miles west of the West Virginia state line. (PHOTO BY BOBBY ROSS JR.)

Then he drove more than an hour to visit a member in a Wheeling, W.Va., hospital, stopping on the way home to pick up a few groceries. (Beallsville has a small store, but the closest Walmart is about 45 minutes away.)

That afternoon, he unpacked, worked on the church bulletin and dressed for a wedding. Afterward, he visited a man in hospice care.

He ate dinner at home and then headed to the church to fold bulletins and put his sermon notes on PowerPoint. He made it home around 8 p.m.

The next day — after the nursing home service and the van pickups — he teaches the 10 a.m. adult Bible class and preaches at the 10:45 a.m. assembly.

After lunch, he drives into town to serve communion to a shut-in. On many Sunday afternoons, he also preaches at a nearby prison or leads worship at a second area nursing home, but not this weekend. At 6:30 p.m., he gives the lesson again at the church’s evening service.

A bulletin board recounts the Beallsville church’s past ministers and other significant historical details. Oral history traces the congregation’s formation back to 1813 — 200 years ago. (PHOTO BY BOBBY ROSS JR.)

The church has no elders or deacons, but Rich said it has men capable of teaching an adult Bible class. So far, however, no one has been willing to take a whole quarter, he said.

“Some have taught one week at a time as needed,” he said.

Despite challenges, Crystal Rich describes the family’s work with the congregation as “such a blessing.”

“We love the people here,” she said.

To illustrate the allure of the country, Jeff Rich takes a visitor outside on a clear night.

Hundreds of stars gleam in the sky, punctuated by occasional flickering lights from passing jets.

Only the sound of tree frogs — and some nights, coyotes’ howls — breaks the silence.

It’s peaceful and quiet, and Rich can’t help but believe that God has placed him here.

“Bloom where you’re planted,” he tells himself as he prays and reflects. “The Lord can bless it.”

Jeff and Crystal Rich stand outside their home with son Don, 18, and daughter, Deauna, 15. The church building can be seen up the hill. (PHOTO BY BOBBY ROSS JR.) 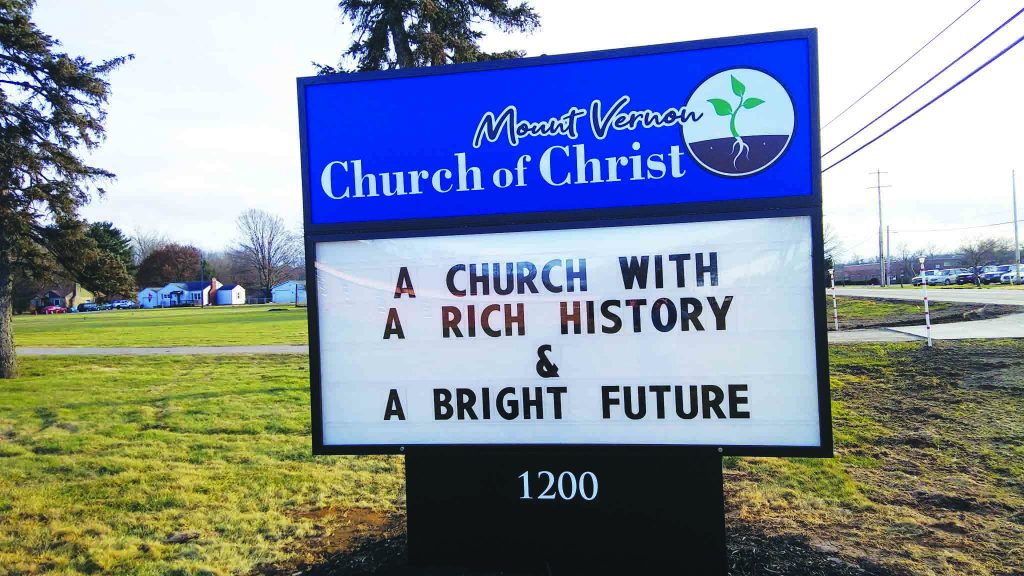 One town, one church once again

Since she was 4 years old, Maxine Vaden has worshiped…