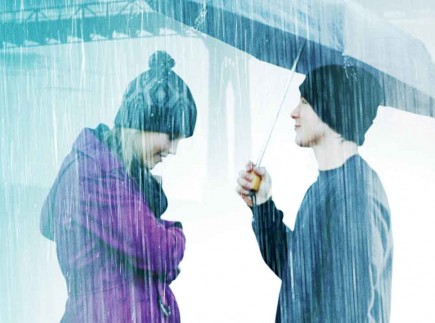 REVIEW: Though offensive, ‘Blue Like Jazz’ creates conversations about faith

JOSHUA WATSON
Donald Miller sets out to make a Christian movie different from the ones currently breaking box office records, namely “Fireproof” and “Courageous.”
He succeeds.
“Blue Like Jazz,” which premieres April 13, is based roughly on Miller’s same-named, semi-autobiographical bestseller from 2003.
“This was my story of walking away from faith and then coming back to faith in a very different way,” Miller said at a screening of the film in Oklahoma City.
“I wanted this story to be a real depiction of the struggle between the world and God, love and sex, as well as faith and doubt,” he said. “We’re not encouraging disobedience, but I didn’t want to water down sin, either.”
He doesn’t.
The film has a well-earned PG-13 rating. There’s a lot of foul language, plus a scene depicting a college prank that involves an oversized prophylactic and a church steeple.
This is a Christian movie that will offend a lot of Christians.
Miller’s book, subtitled “Nonreligious Thoughts on Christian Spirituality,” struck a chord with many, particularly those who came of age in the 80s and 90s — as Miller did. The book spent more than 40 weeks on the New York Times bestseller list and gave voice to Christians who liked spirituality, but not religion.
The movie’s story differs some from the book. In the words of Miller, who took questions during a screening in Oklahoma City, the movie seeks to affect culture and open up a conversation.
One way Miller sets the movie apart from others in the Christian genre is by hiring accomplished actors, such as Marshall Sawyer, Claire Holt and Tania Raymonde, who have had significant roles in the TV shows “Prison Break,” “The Vampire Diaries,” “Pretty Little Liars” and “Lost.” Each does an exceptional job in their role. Only two members of the cast were believers, according to Miller.
The film already has stirred up controversy in the emerging Christian film industry, said director Steve Taylor, who also spoke at the screening.
“There’s a certain church in Georgia that created a movie called ‘Fireproof,'” Taylor said. “For some reason, they have said that if you work with “Blue Like Jazz,” you can’t work with that church’s next movie. I just don’t understand that.”
As the film opens, Miller’s character, played by Marshall Allman, is a leader in his Baptist church’s youth group and is preparing to attend a Christian university in the fall.
His dad, who walked out on the family early in Miller’s life, enrolls Miller at Reed College in Portland, Ore., referred to in the film as the most godless campus in America. His dad, a jazz aficionado, wants Miller to learn to be a great writer — and to quit being a part of a religion that, in his opinion, tells people how to think.
Miller has no intention of going to Reed College but changes his mind after discovering his churchgoing mom has been rather hypocritical in her life. In anger, Miller jumps in his car and drives from Houston to Portland. The rest of the film documents Miller’s change from a closeted Christian to a self-absorbed, faithless party-goer. By the film’s end, he has transformed back to a believer — although a changed one — made clear in the movie’s most powerful, yet muted, final scene.
For those who read the book, regularly read Relevant magazine and kickstarter.com, which was instrumental in the film’s production, “Blue Like Jazz” will resonate.
The film has more extremes in character stories than perhaps is believable — one of the most glaring differences between the movie and the book. However, “Blue Like Jazz” does work to create conversations with non-Christians about God.
As a professor at a private Christian university, I have observed a generation gap among Christians regarding cursing, drinking and a dissatisfaction with the mixing of faith and politics in this country. “Blue Like Jazz” has a lot of cursing and drinking. This is intentional, and probably not that uncomfortable for the younger audiences likely to enjoy the film. These individuals, often under the age of 30, are more interested in social justice than clean language.
The movie highlights hypocritical behavior by Christians that often turns people off to God while also demonstrating how those pushing God out of their lives are constantly seeking ways to fill a void they can’t quite explain.
By the end of the film, Miller comes to love his faith by watching it transform the life of one of his friends — something he never expected to see at Reed College.
Regardless of your opinion of the book or the film, recognizing the impact our behavior has on those around us is a lesson that more Christians should take to heart.
After seeing the movie, I can understand why some Christians won’t like “Blue Like Jazz,” especially if the church steeple scene is too offensive.
However, Miller feels people are missing the point by focusing too much on the accurate representations of sin in the film.

“That scene was pretty important because that church welcomes the main character when he returns to faith,” Miller said. “That church had no problem turning the other cheek. That’s still a pretty powerful message to the world.”
JOSHUA WATSON teaches communication at Oklahoma Christian University while pursuing a doctorate at the University of Oklahoma. He attends the Edmond Church of Christ.