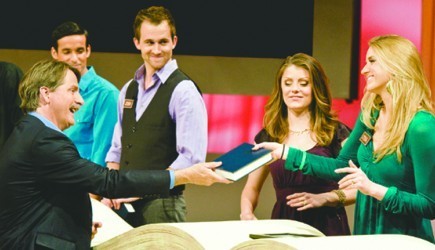 Review: New Bible quiz show may not ‘Challenge’ but does entertain

Kimberly Mauck
With the Olympics over, my family had almost abandoned the TV. But GSN’s “The American Bible Challenge” drew us back for some good, clean entertainment.
Formerly known as the Game Show Network, GSN launched an eight-episode run of the show recently.
Jeff Foxworthy hosts. His former game show, “Are You Smarter Than a Fifth-Grader?” was canceled. But in its series premiere, “Challenge” brought in 1.7 million viewers — an all-time record for the network.
As he did on “Fifth-Grader,” Foxworthy keeps the audience chuckling. But here, he does something more: He shows his faith. On the premiere, he says he has traveled to Africa three times — presumably on mission trips, as he mentions children opening shoeboxes filled with donations.
He also shows familiarity with the Bible stories that are the background for the questions. Foxworthy transcends his “You might be a redneck” comedian persona and becomes the public image of what today’s “working man” Christian looks like — humble, kind and fun.

Foxworthy begins the show by introducing the three teams that will be competing during the hour-long episode. A montage shows each team in its hometown, discussing faith, their relationships with one another and the charity for which they’re playing. The clips provide viewers with profiles of diverse people of faith across the country — among them a deputy sheriff and veteran who now ministers to prison inmates, a woman who runs a food pantry in Plano, Texas, and a retired fire captain and his golf buddies.
The premiere episode provided some laughs and, toward the end, a few challenges. Like many game shows, the first round was confidence-building. (“What bird did Noah send out to look for dry land?”)
The second, called “Faithbook,” asked contestants to name Bible characters most likely to have posted certain status updates or written on other characters’ walls. (“On whose wall would Isaac have posted this: ‘Dad, I’m all ready for our camping trip! But where is the sacrificial goat?’”)
It wasn’t until round four that my husband and I finally began to debate answers, rather than blurt out the correct ones automatically. That was also the first round for a contestant to give a wrong answer.
The winning team is awarded $20,000 for its charity, and winning teams will compete against each other for $100,000 for their charities in a two-episode winners tournament.
That’s ultimately what saves “Challenge” from reeking of the feel-good Gospel preached in entertainment-as-worship churches. The faith and sincerity of the contestants and host make it worth an hour of family time in front of the TV.
WATCH THE SHOW ONLINE