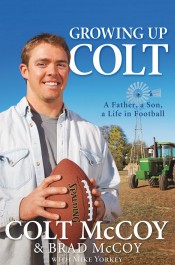 DAVID RAMSEY
The title of the story of Colt McCoy’s surprising rise from small-town football hero to NFL starter could be “Growing Up Old-School Church of Christ.”
In “Growing Up Colt: A Father, a Son, a Life in Football,” Colt attends church services three times a week, suffers through spankings, endures his mouth getting washed out with soap and refrains from drinking alcohol or even Dr Pepper.
Through it all, he retains a refreshing sense of humility despite constant adulation and remains utterly devoted to his Lord and Savior.
Colt McCoy is a folk hero in Texas, and he has a good chance to become every bit as beloved in Cleveland, where he seeks to revive the Browns, but he belongs to the Church of Christ. His story is a reminder of how much our movement can help a young man achieve.
Co-written by McCoy, his father Brad McCoy, and sportswriter Mike Yorkey, “Growing Up Colt,” is — there’s no way around it — downright inspiring.
This book is as clear as a sunny spring afternoon in West Texas, where Colt grew up. It’s earnest, unpolluted by cynicism. It’s a strong read with clever, direct writing. The book will most strongly appeal to parents and football fans, but anyone who enjoys reading about a young man who refuses to fail also will enjoy it.
First, Colt tells his version of his upbringing, and then Brad follows with his take. Father and son riff off each other, and the two direct, no-nonsense voices allow the reader to sit beside Colt and Brad during his childhood, his teen years, his college days and, finally, his rookie year in the NFL.
His ambitions as a football player seem absurd. Colt plays prep football for his father at Jim Ned High School in Tuscola, a tiny, dusty Texas town — or maybe just a suggestion of a town — on the outskirts of Abilene.
Colt’s ambitions were outsized in this undersized location. He talked in grade school about his vision of playing in the NFL, but he didn’t just talk. He worked, relentlessly and wisely, chasing his vision.
The story threatens to veer into the too-good-to-be-true category, but never quite arrives there. Colt is gifted with a powerful arm and an endless determination to improve. He’s a superb student, bright enough to be pursued by Stanford, diligent enough to graduate from the University of Texas with a 3.4 grade point average. He’s protective and proud of his two younger brothers. He’s wildly in love with his wife. He’s dedicated to following the narrow path of righteousness despite being surrounded at the University of Texas by all the temptations of the flesh.
His book works most powerfully as a statement of how hard work can transform a life. McCoy was born with the athletic gifts required for high school stardom, and he could have cruised his way to a strong football career at a private Christian school.
But he wanted more.
In a typically direct sentence, McCoy writes, “I wanted to get good enough to play football in college, but I wanted to play for a bigger school than Abilene Christian University.”
He wanted to compete at UT and play in the NFL. Not many of us can grab virtually everything we envision. Colt did, and his determination serves to multiply his reader’s determination and ambition. If Colt can become so successful, the reader is left with a simple, powerful question: What can I do?
And there’s another tantalizing question. How will this story end? Leading an NFL team as quarterback is the toughest task in sports. The failure rate is astronomical, and McCoy might, for the first time in a happy life jammed with triumph, travel to the foreign land of failure.
But readers — even devout Steelers fans —will root for him to carry the Browns to a Super Bowl title.
More importantly, readers will realize this is a young man who has more on his mind than a mere game.
Colt’s unbending belief in an all-powerful God served as his fuel for his inspiring rise. He labored without ceasing as he chased his unlikely goals, but the charm of this book is his unending thanks to the family and the faith that made possible his journey from Tuscola to the NFL.
DAVID RAMSEY, a 1979 graduate of York College in Nebraska and a 1981 graduate of Abilene Christian University, is a sports columnist for the Gazette of Colorado Springs. He attends the Eastside Church of Christ. Contact him at [email protected]