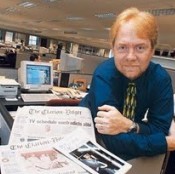 Reporter earns $500,000 prize for serving ‘God, justice and the families’

Tamie Ross
Jerry Mitchell doesn’t deal in rumors.
When the veteran investigative reporter for the Clarion-Ledger in Jackson, Miss. heard talk of his name being linked to the prestigious MacArthur Fellows program, he quickly dismissed it.
“There are thousands of names tossed around each year,” said Mitchell, 50, who is a member of the Skyway church in Pearl, Miss., along with wife Karen. “I don’t think of myself as important.”
The committee that ultimately selected this year’s 24 recipients felt differently about the man who has made a career out of uncovering, reporting and exposing facts in unsolved murders of civil rights activists.
The $500,000 award – distributed in quarterly sums of $25,000 over the next five years – came as a complete shock, Mitchell said, one from which he’s still recovering.”
“I have no clue who nominated me or anything,” he said. “There’s a lot of secrecy involved in the selection process.
“But I feel like the reason behind it is that they try to pick out people they feel like will continue the work regardless of whether they get the money.”
In Mitchell’s case, that answer is a given. It is imbedded in Scripture for him, found in verses such as Proverbs 21:15: “When justice is done, it brings joy to the righteous but terror to evildoers.”
“God is good,” Mitchell said. “My Dad and I were talking about how sometimes if you just wait God blesses you in ways you don’t begin to understand. It’s just interesting how he chooses his timing.”
Mitchell plans to use the money, classified as a grant by the John D. and Catherine T. MacArthur Foundation, to continue reporting on cases that haven’t yet been reopened, mostly from the 1960s. Specifically, he’s pursuing evidence connected to four suspects from murders documented in the period-film, “Mississippi Burning.”
He also plans to write a book about the families and stories that have become dearer to him than any award or more valuable than any amount of money – though he has more than 30 national accolades and several thousand dollars in prizes to his credit.
“If I had to make a choice between the awards – even this one – or the incredible people I’ve gotten to know throughout … I would take the families,” Mitchell said. “You’d never put a monetary value on the relationships, how incredibly gracious and supportive they’ve been.”
His work has not been without its share of hardship or danger. The FBI is currently investigating a series of death threats against him, Mitchell said. Over the past 20 years, critics have cancelled subscriptions and complained about his determination to seek justice in unsolved slayings.
The Harding University graduate believes God still has work for him to do, however.
“Our reward, anyway, is not this world,” he said. “Certainly we do get blessings. I consider a big one to be the opening and re-prosecution of almost every one of these cases.”
“If that doesn’t give you faith, what will?”