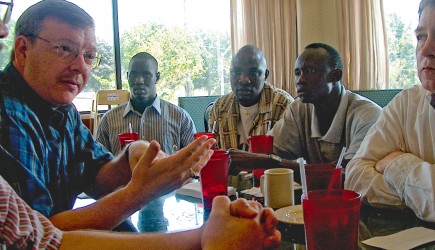 Erik Tryggestad
KANSAS CITY, Mo. — It was a meeting that bridged nationalities, faiths and food groups.
Members of churches of Christ and Methodists met with “Lost Boys” of Sudan to discuss expanding relief efforts in the African country — and it all happened in a Chinese restaurant.

Members of Brother’s Organization for Relief (BOR) met Aug. 23 to discuss opportunities to help Sudanese living in the Kakuma refugee camp in neighboring Kenya. A bishop in the camp told the group that $100 could educate one child there for one year.

“If we could raise $10,000, that’s something that’s small enough to accomplish, but (it) would make a major impact,” said Kevin Bullard, BOR’s vice president and minister for the Gladstone, Mo., church.
BOR is the brainchild of John Gak, a Sudanese immigrant baptized in 1994 by Africa missionary Joe McKissick. The group aids Sudanese living in the Kakuma camp and Kansas City — part of a larger group of Sudan refugees called “Lost Boys,” who take their name from the fictional boys without parents in “Peter Pan”

Joining BOR members was Ken Grimm, of the Westminster, Md., church, who has been involved with helping Sudanese refugees in Africa since the mid-1970s. Grimm told the Chronicle Sept. 4 that he’s been invited to work with a school in the Kakuma camp.

The story of how the “Lost Boys” got to the Kakuma camp, and eventually Kansas City, was the subject of a “60 Minutes II” segment earlier this year. Seventeen years of civil war in Sudan, between the Muslim north and the predominantly Christian south, has displaced nearly 5 million people since 1983. Among these refugees are at least 20,000 children — mostly boys — between ages 7 and 17, according to interdenominational relief agency Church World Service.

Beginning in 1987, thousands of “Lost Boys” fled their homes in Sudan, eventually arriving at the Kakuma camp, living on one meal per day provided by the United Nations High Commission for Refugees. In 1999, the United Nations and the U.S. State Department referred about 3,300 of these youths for resettlement. Cities that received “Lost Boys” include Atlanta, Houston, Chicago and Kansas City.

Gak, a member of the Gladstone church, has kept “Lost Boys” in his home. He launched BOR in 1999, rallying leaders in Kansas City’s Methodist, Episcopal and Christian churches to help, along with several of the city’s political leaders. The group assists “Lost Boys” as they pursue education in the United States.

Barbara Lusk and Emma Stewart, members of Kansas City’s St. James United Methodist Church, work with BOR and act as “moms” for several of the “Lost Boys,” helping them with everything from finding housing to college enrollment.

Stewart said she’s been surprised at how quickly the Sudanese teens adopt American culture, “from cell phones to FUBU (clothing),” she said. But they also exhibit strong desires to return to Sudan and help their people.

“Education is so important to them,” Lusk said. “They want to go to school. They have aspirations to do things to help people back home.”

The adopted mothers said that they’re happy to be part of an organization that includes church of Christ members and people from other Christian groups.

“I have (lots of) friends in different religions,” Stewart said. “We’re all in this together.”