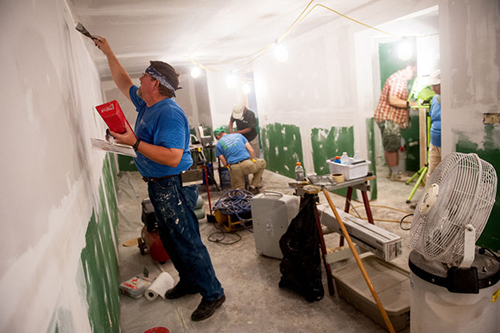 Thaw Ray Htoo’s residence was filled with tools, construction materials and dedicated workers this weekend as members of Fairview Road Church of Christ worked to add some finishing touches.

Volunteers from the congregation worked to remodel the family’s home in a four-day marathon, beginning Wednesday and wrapping up Saturday.

After living in a refugee camp for a large portion of his life, Htoo, who hails from Myanmar, came to the United States in 2010. In 2013 he met his wife, Marry Thain, who has a similar backstory.

The couple and their 1-year-old son now live in a three-bedroom, one-bathroom home in Columbia with six other people, including Thain’s parents and her brother’s family. They have another child on the way.

The volunteers decided to finish the family’s basement, adding a living area, two bedrooms, a bathroom and a utility room “to make it more livable,” the Rev. Brian Hajicek said. They also landscaped the backyard, constructing a storage shed and stone steps as well as planting a garden.

Htoo’s ‘home makeover’ is the seventh remodel from the Fairview Road Church of Christ since 2008. And the congregation is still eager to serve.

“We don’t want to just sit in our own walls, so our church is very giving and wanting to get out and show people that church is all about helping people,” coordinator Dean Bossert said. “That’s what we’re trying to do, and that’s what our congregation likes to do.”

Read the full story and check out our related coverage.