Reader feedback: How should Christians respond to ‘children’s famine’ in the Horn of Africa?

An appeal on Christian Relief Funds website for victims of the famine in East Africa. (Photo via christianrelieffund.org)

Nearly every day is a new horror story in the Horn of Africa — the portions of eastern Ethiopia and Kenya surrounded by the troubled nation of Somalia.
The grim political situation in Somalia — which has been without an effective central government since 1991 — is compounded by a terrible drought and famine. Somalis are pouring into a camp in Dadaab, Kenya, seeking food, water and refuge from the brutal warlords who control their country.
Some have dubbed the crisis “the children’s famine,” since more than 30,000 children in southern Somalia have died, according to news reports.
A recent story from the Associated Press gives the grim details of daily life in the Horn of Africa:

Wardo Mohamud Yusuf walked for two weeks with her 1-year-old daughter on her back and her 4-year-old son at her side to flee Somalia’s drought and famine. When the boy collapsed near the end of the journey, she poured some of the little water she had on his head to cool him, but he was unconscious and could not drink.

She asked other families traveling with them for help, but none stopped, fearful for their own survival.

Then the 29-year-old mother had to make a choice that no parent should have to make.

“Finally, I decided to leave him behind to his God on the road,” Yusuf said days later in an interview at a teeming refugee camp in Dadaab, Kenya. “I am sure that he was alive, and that is my heartbreak.”

Read the full story.
I’m collecting reports from Church of Christ-supported ministries responding to the famine. Please contact me if you have updates or additional information.
• Christian Relief Fund in Amarillo, Texas, is collecting funds to bring relief to Somali refugees in eastern Kenya. The ministry’s president, Milton Jones, traveled to Kenya recently and saw firsthand the crisis facing families and children sponsored by his organization. “We have children in Barwessa, Kenya, without food,” he said. “Livestock have died. People are walking 15 miles to get a bit of water that is already polluted.” The ministry is providing food and water in the Dadaab camp and other areas.
• John Kachelman, minister for the Judsonia Church of Christ in Arkansas and a longtime coordinator of relief shipments around the globe, plans to send two containers to northern Somalia, filled with 40,000-plus pounds of rice, family buckets, personal hygiene kits, shoes and clothing. The containers will be distributed in a refugee camp in Garowe, in the Somali region known as Puntland. “While the tragedies of earthly life are horrible, the beauty of the Lord’s compassion demonstrated by his church is inexplicably wonderful,” Kachelman said. See more information on the Judsonia church’s Somalia page. 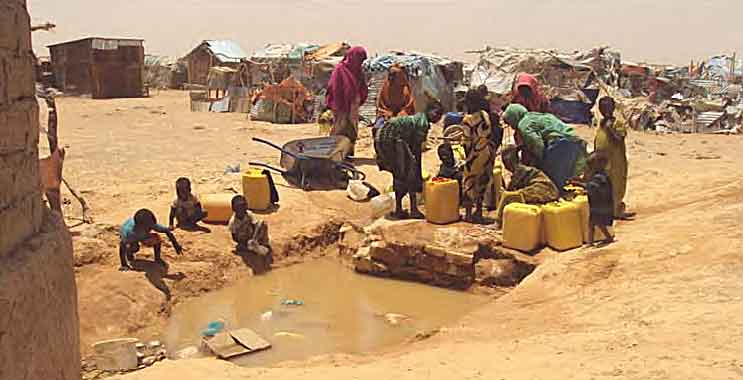 Somalis gather around a well at a camp for internally displaced persons (or IDPs) in Garowe, Puntland. (Photo provided by John Kachelman)

• Church members Brad Gautney and Brian Wallace plan to travel to the Dadaab camp “to assess how we can best assist the people being most affected,” Gautney said. The two men are part of Global Health Innovations, a nonprofit “that exists to design, implement and manage medical programs focused on providing solutions to save lives — one village at a time,” according to the ministry’s website. (Gautney and Wallace have both worked in Haiti and have close ties to Manna Global Ministries, which serves Haiti and the Dominican Republic. Manna and Global Health are sister organizations.)
• Healing Hands International has “begun to assess the situation, and we are looking for partners who are established in these areas and who are willing to help us distribute aid,” said the Nashville, Tenn.-based ministry’s president, Randy Steger. “As in the case of every major disaster, Healing Hands will respond to help these people.”
Some questions to consider:
In the past two years, Churches of Christ have responded to earthquakes in Haiti and Japan. Is “compassion fatigue” likely to affect our response to the crisis in Africa?
Similarly, in recent week the U.S. has endured a barrage of negative financial news, including the downgrading of our credit rating by Standard and Poor’s. Globally, stock markets have behaved erratically. Does any of this make it harder for us to focus on problems in far-off countries? Should we?
Most of the church-supported ministries responding to the famine are themselves located in drought-stricken areas of the U.S. Does that affect your thinking about the situation in Africa in any way?