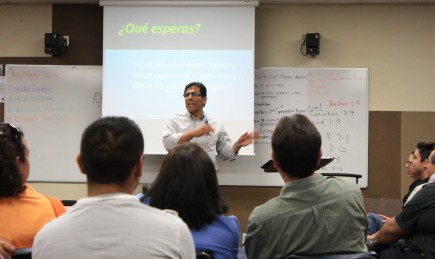 Sarah Stirman
NORTH RICHLAND HILLS, Texas — When it comes to reaching their Latino neighbors, a lot of U.S. churches are speaking the wrong language — Spanish.
“Many denominational and local church leaders equate ‘Hispanic ministry’ with ‘Spanish-language ministry,’” said Dan Rodriguez, professor of religion and Hispanic Studies at Pepperdine University in Malibu, Calif.
Rodriguez discussed findings from his book, “A Future for the Latino Church,” during a summit with ministers and ministry leaders at The Hills Church of Christ. Hector Hinojosa, a member of The Hills church, stressed that the summit’s purpose “is not to replace Spanish-speaking churches.”
“This is reaching second- and third-generation Latinos,” Hinojosa said.
In Texas, people of Hispanic descent comprise 37.6 percent of the state’s population, according to the 2010 U.S. Census. Many don’t consider Spanish their primary language, Rodriguez said. The professor, himself a third-generation Hispanic American, cited surveys that show 96 percent of U.S.-born Latinos are either English-dominant or bilingual.
When churches focus exclusively on ministry to immigrants from Latin America, they miss the chance to reach U.S.-born Latinos, he added. Church planters in Latino communities face the challenge of engaging a Hispanic culture in an English-language context. While researching his book, the professor found examples of congregations doing this, but none are Churches of Christ.
Ron Carlson hopes that will change. The preacher for the Duncanville Church of Christ said he sees predominantly Anglo churches in his community, in the southwest Dallas metro, shutting down.
“If we don’t reach out to the Hispanic community, who will be left in the church?” Carlson asked.
Jerry Gonzalez, the Duncanville church’s Hispanic minister, said he relates to what many of his peers refer to as “living in the hyphen” of the Hispanic-American demographic. Many don’t feel comfortable in English- or Spanish-language services and lose interest in church. Gonzalez said he wants them to return — and to help spread the Gospel to future generations of Latinos.
Church planting and targeted ministries alone can’t guarantee success, Rodriguez said. Reaching Hispanic Americans — or any Americans — requires Christians to see themselves as missionaries.
“I’m not here because of an evangelistic program. I’m here because of good neighbors,” he said, referring to the family that spent 11 years inviting and bringing his family to church. “Good neighbors are patient.”