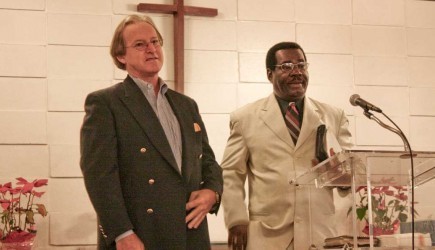 Quake claims up to 150 from one Haitian church

Missionary Joe Worndle, who has been on the ground in Haiti since the Jan. 12 earthquake, reported that as many as 150 church members died in the capital, Port-au-Prince, as they made their way to a Tuesday evening Bible study.

The group was headed to the Lamentin Church of Christ in Port-au-Prince when the 7.0-magnitude quake struck.

“When the quake happened, they took refuge in the wrong place,” Worndle said. Attempting to dodge falling debris, they squeezed into a building that soon collapsed.
Worndle, who has served as a missionary in Haiti for about 20 years, received the news from Erique Bathard, the Lamentin church’s minister.

The missionary himself spent the days after the quake working in undamaged northern Haiti, where survivors of the disaster flocked seeking food and medical treatment. He traveled to south Florida for a few days to gather money and supplies to take back to Haiti.

“The Bible says … if God is for you, who can be against you?” he told the 75-member Central Haitian church. “Even death can’t be against you, and I have seen plenty of death last week. And it’s terrible what I saw — and I was not even in Port-au-Prince.”

In addition to the lives lost, several of the approximately 40 Churches of Christ in the quake zone lost their meeting places, Worndle said. The church building in Bolosse, near the epicenter, was destroyed, as were two church facilities in Leogane. Four of the six church buildings in Jacmel were destroyed.

One of the largest congregations in Port-au-Prince, the Delmas 43 Church of Christ, was devastated by the quake. At least nine of the congregation’s 1,200 members died, said minister Jean Robert St. Hillare.

Another congregation on Delmas Street, the 650-member Delmas 28 Church of Christ, meets in a facility that also houses the Delmas Christian Secondary School. A nursing class was in session when the quake hit, demolishing the top two floors of the building and pouring rubble into the street, said Jeantyrard Elmera, the school’s director.
“Jean told me that 36 people perished when the building collapsed,” said Ron Bever, an elder of the Britton Road Church of Christ in Oklahoma City, which supports the Delmas 28 church’s work. “In addition, 15 Christians died in their homes in theearthquake.”
“About 300Christians have been injured and there are 500 church members total whoneed food, clothing, and shelter,” Bever said. U.S. medical volunteers and workers with Hope for Haiti’s Children are treating the survivors.
In addition, 311 Christians lost their homes in the quake, Elmera said.They are camping in three groups — one in Elmera’s yard with no tents.
“Last Sunday, each of these three ‘camps’ hadworship services and 17 people were baptized into Christ,” Bever said. “Jean reportsthat many want to turn their life to God since He is their only hopefor this life and eternity.”
Outside of the quake zone, Christians struggle to care for the wounded. Pacius Gueston, a church member in Gonaives, Haiti, sent an e-mail appeal for clothes, bandages and pain relievers to help survivors who suffered cuts in the quake.

“We plan to feed some people at Raboto Hospital (in Gonaives) because the government brought a lot of people without their parents,” Gueston said. “(There is) no way for the hospital to feed that many people.”

“This is an emergency … they are hungry,” he added. “Please keep praying for us to the best we can to help people survive.”

Though the need in Haiti is great, Worndle advised U.S. church members against sending packages of relief supplies directly to Haiti.

To help Haitians, “right now money is the best thing,” Worndle said. “It’s very expensive to ship and a lot of things get lost along the way.”

Many Churches of Christ have taken special contributions for Haiti relief. Worndle’s sponsoring congregation, the West Broward church in Plantation, Fla., has received $60,000 to distribute in Haiti, the missionary told the Central Haitian church.

“The need is great,” said Worndle, who has seen lots of severed limbs and severe injuries in the days since the quake. For many of the victims “there’s nothing we can do … today. We can only pray for those who survived, and give comfort to those that survived.

“And we have to help people now — help them to survive, and give them some dignity, and help them to rebuild their lives. And we in the Churches of Christ, we’re going to do that. We’re going to help them to rebuild their lives, their homes, their schools and, of course, their churches.”
SEE EXPANDED COVERAGE of Haitian churches in south Florida and ongoing relief efforts in the next print edition of The Christian Chronicle. To subscribe, click on “Get it delivered” in the right column of the home page.