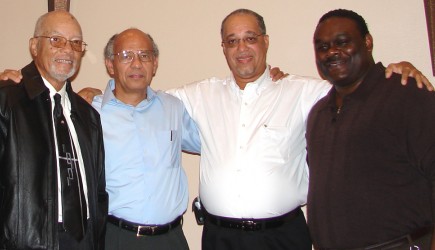 Progress in the Big Easy: Rebuilding the church

Bobby Ross Jr.
NEW ORLEANS — Hurricane Katrina delivered a big blow to the Crowder Boulevard church — but not a knockout punch.
The congregation, which had a membership of 150 before the storm, did not meet for a year and a half.
Katrina blew out the storefront window overlooking the auditorium, knocked over pews and flooded the church with 4 feet of grimy, stinky water.
But elder Greg Hamilton said church leaders never contemplated not rebuilding.
“It didn’t matter if the building was completely gone, destroyed, devastated — the decision was made immediately that we were going to rebuild,” Hamilton said.
“Through constant prayer, that’s what kind of sustained us,” elder Gene Thornton said.
A dispute with the church’s insurers delayed the process, but rebuilding began a year ago.
In March 2007, members began worshiping in a house. By late July, the fire marshal gave the church permission to meet in its renovated auditorium.
Still, construction barriers block access to classrooms and the fellowship hall. Sunday attendance averages about 25.
But church leaders said the emphasis is not on how many members might return, but on the tremendous opportunity to share the gospel with a beleaguered city.
Across town, the Elysian Fields church has finished rebuilding classrooms and the kitchen in its flooded basement. Water never reached the congregation’s elevated auditorium, but mold remediation was required.
A new preacher, Jarvis James, was hired eight months ago. Average Sunday attendance of about 155 is about half what it was before Katrina.
“The state of the church is good,” said Otis Shields, an Elysian Fields leader. “The storm blew some buildings and some people away, and we moved on from there.”
The church is sponsoring a Bible question-and-answer program on the radio. It’s also organizing a theatrical ministry to take God’s word to the streets.
“We are trying to let the world know that God’s house is here,” Shields said.