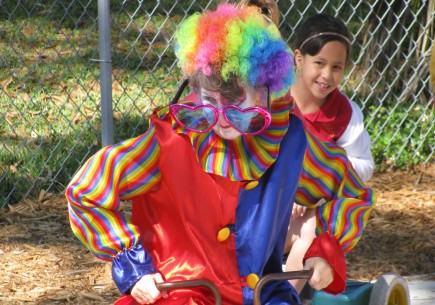 Principal — aka Happy the Clown — celebrates with students

staff reports
Happy the Clown makes her recent smiling debut at Gulf Coast Christian Schools in St. Petersburg, Fla., as first-grader Bethani Bruce looks on. Principal Linda Smock had promised students that she would be a clown for a day if they collected 150,000 pennies to help improve the school playgrounds. Dressed in a full clown costume, Smock bounced into chapel to cheers from the students. She announced that they had achieved their goal.
A milestone for baseball coach
LUBBOCK, Texas —  Texas Tech Universty head baseball coach Larry Hays, an elder at the Green Lawn church, reached a milestone with his team’s 10-5 win over Texas A&M-Corpus Christi on April 2. Hays became the fourth coach in NCAA history to amass 1,500 career wins.
“I’m lucky to be able to come to the park every day,” Hays told the Lubbock Avalanche-Journal. “I’m a grateful person and really appreciate the opportunity just to do things like this. Every game is special to me, and they’re all the same.”
Hays coached his first 16 seasons across town at Lubbock Christian University, where he is the all-time baseball win leader at 695. He is in his 22nd season at Texas Tech, where he has won more than 800 games and led the Red Raiders to three conference titles.
CAMPUS MINISTRIES
NORTH TEXAS
DENTON, Texas — The campus ministry of the Singing Oaks church, which serves the University of North Texas and Texas Woman’s University, has bought the old Delta fraternity house.

The ministry plans to turn it into a new campus center for Christian students, campus minister Dan Cooke said.

UNIVERSITY OF MISSISSIPPI
OXFORD, Miss. — Rebels For Christ at Ole Miss spent their spring break in West Virginia.
They held a “Free Hugs” event on the West Virginia University campus one day. The event can be seen at
YouTube.com.
UNIVERSITY OF NORTH CAROLINA
CHAPEL HILL, N.C. — Carolina for Christ recently hosted an event on campus entitled “Is Jesus Green? A Christian View of the Environment.”
Campus minister Matt Carter gave a brief presentation on a biblical view of the environment, then opened up the meeting to discussion.
CHILDREN AND FAMILIES
AGAPE CHILD AND FAMILY SERVICES
MEMPHIS, Tenn. — Randy Lillard, an AGAPE board member and past chairman, recently received the Jefferson Award, given to outstanding volunteers by The Commercial Appeal newspaper.
Lillard, an elder at the Sycamore View church, has served as a foster parent to more than 20 children and adopted two since 1991.
AGAPE served more than 11,000 children, adults and families in the last year.
HIGHER EDUCATION
ABILENE CHRISTIAN UNIVERSITY
ABILENE, Texas — The men of Gamma Sigma Phi, an ACU men’s social club, recently played a 68-hour benefit volleyball game in Moody Coliseum.
Proceeds will go to the Osteogenesis Imperfecta Foundation. Osteogenesis Imperfecta, also known as “brittle bone disease,” is a genetic bone disorder characterized by fragile bones that break easily.
FAULKNER UNIVERSITY
MONTGOMERY, Ala. — A team of law students representing Faulkner’s Jones School of Law won the national championship in the Thurgood Marshall National Mock Trial Competition in Detroit recently.
Third-year law students Monica Jackson and Courtney Joiner and second-year law students George Bulls and Mary Alexander-Oliver defeated the Texas Tech School of Law in the final round. All four Faulkner students are members of the Ernestine S. Sapp Black Law Students Association chapter at Faulkner.
OKLAHOMA CHRISTIAN UNIVERSITY
OKLAHOMA CITY — Oklahoma Christian has announced that the School of Engineering will begin offering courses leading to the Master of Science in Engineering degree starting in fall 2008.
A majority of faculty members had voted “no” on the new program.
However, President Mike O’Neal urged professors at a special meeting April 4 not to interpret the decision to move forward as “a rejection or even a reduction” in his support for faculty involvement in the direction and governance of Oklahoma Christian. A news release from Oklahoma Christian said the new program will better equip future engineers to compete in a global marketplace.
K-12 CHRISTIAN SCHOOLS
BOYD-BUCHANAN SCHOOL
CHATTANOOGA, Tenn. — At Boyd-Buchanan, Dustin Walker taught wellness and physical education to boys and girls and coached soccer. In addition, he and his wife, Hannah, were involved with the youth group at the East Brainerd church.
But Walker recently left the school to fulfill miliary obligations with his Marine artillery unit, Mike Battery.
The entire school joined for a going-away celebration and presented the lance corporal with cards and gifts before he shipped out to Kuwait for training and eventual service in Iraq. On the day Walker left campus, high school assistant principal Steve Robbins tied a large yellow ribbon around the giant oak tree that graces the lawn near the high school building — a daily reminder of Walker’s service abroad.
GREATER ATLANTA CHRISTIAN SCHOOL
NORCROSS, Ga. — About 200 Greater Atlanta Christian students participated in spring break mission trips all over the world.
Their seven destinations included Africa, Austria, Czech Republic, Haiti, Honduras and two locations in Mexico.
MIDDLE GEORGIA CHRISTIAN SCHOOL
MACON, Ga. — Middle Georgia Christian held its annual “Jog-A-Fun” April 4 despite messy weather at the beginning, director Stan Frank said.
“All 140 students plus some staff members and parents walked, ran or jogged around our track for most of the morning to raise funds for our upcoming year,” Frank said.
The school plans to add the 11th grade next year and the 12th grade in the 2009-2010 school year.