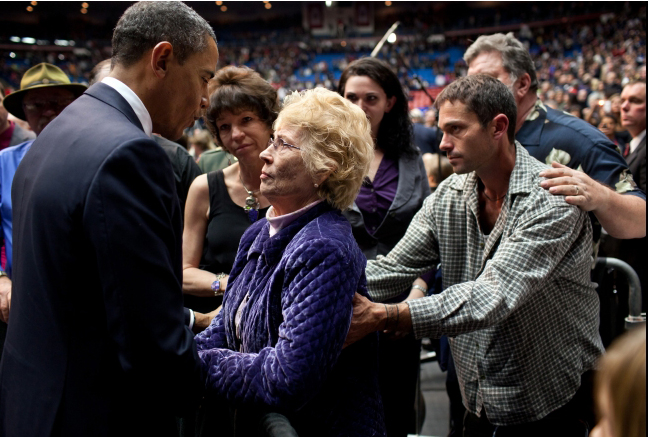 President Obama: Dorwan Stoddard sacrificed his life for his wife’s

Dorwan Stoddard gave his life for his wife’s, President Barack Obama said tonight.
At a memorial service that drew thousands of mourners, Obama paid tribute to the Arizona church member and five other people killed during Saturday’s assassination attempt on Rep. Gabrielle.gif?Action=thumbnail&Width=460&algorithm=proportionalfords, who was critically wounded.
“Dorwan and Mavy Stoddard grew up in Tucson together about 70 years ago,” the president said at the University of Arizona basketball arena. “They moved apart and started their own respective families. But after they both were widowed, they found their way back here to — as one of Mavy’s daughters put it — be boyfriend and girlfriend again.
“When they weren’t out on the road in their motor home, you could find them just up the road helping folks in need at the Mountain Avenue Church of Christ,” Obama said. “A retired construction worker, Dorwan spent his spare time fixing up the church along with dog, Tux.
“His final act of selflessness was to dive on top of his wife, sacrificing his life for hers.”
Jessica Knapp, who works with the youth group at the Mountain Avenue church, described the Stoddards as “the lifeblood” of the 120-member congregation.
Knapp told The Christian Chronicle on Saturday that Dorwan Stoddard, 76, tried to protect his wife during the rampage and was hit in the head.
“He got on top of her and tried to shield her,” Knapp said of Mavy Stoddard, who suffered gunshot wounds to her legs but survived.
The Mountain Avenue church has details on its website on how to send tax-deductible donations to benefit Mavy Stoddard.
See the Chronicle’s previous coverage of the Arizona shooting rampage, including more photos and videos.

God Bless everyone. May we all draw strength from God and one another in this time of shock and grief. May God bless this church and area that good will be shown not only in Arizona, but throughout the world.
-Maryland
Diane Threat
Thank you for posting this so quickly. I was not able to attend tonight, and I really enjoyed reading your article. I go to Mt. Avenue Church of Christ.
Bonnie Rose
A tribute to the power of our Lord’s Love, poured into our hearts, through His Spirit.
John Barhydt
Who saw his stepdaughters on TV the other day? I don’t know if both of the women were stepdaughters, or if one of the women was Mr. Stoddard’s biological daughter and the other was his stepdaughter, but one of them said that she had a biological father, but that Mr. Stoddard was her “daddy”.
Tina Sergent Seward
I also saw the interview… they were both Mavy’s daughters, but they considered Dorwan their “daddy” after their biological father passed away. Very special tribute to a man who loved God and it showed in everything he did!
Carol McClurg Onkst
Faithful Christians have a home in Heaven with God. When we Die in Christ we shead this earthly body for and new one. I am sure he will be missed but I know if I die as a faithful Christian I will be able to know all of God’s children in heaven. We need to remember life is short and try to realize what is most important. I hate to hear of any death, but when I heard he was a member of the church I felt a bit of calmness. Time will make us feel better but I know all thoes who knew him personally are in pain right now. We as faithful christians have the assurance the God hears our prayers and answers. Pray for the ones left behind and ask God to comfort them and care for their needs. Thoes who are hurting can read Gods words. The Bible is where we need to turn to to find the answers to how we become Christians and how we should conduct our lives. We can read the Bible and hear God speaking to us. When I leave this earthly body I hope my parting could be a reminder of turning to God and not so much about me and what I did. I do feel good knowing that a fellow Christian died laying down his life for another. Remember that Christ gave up his life so that we all could be saved if we do his will. I as a christian man want sister Stoddard to know I have an honest respect for her late husband. In this day and time its not too often I can say I truly respect people I meet or read about.
D. Mitchell
A great interview..a wonderful God loving and serving man..a great example of what a christian life should be..appears he blessed all who came in contact with him
Bob Aherin
Dorwan loved his wife as Christ loved the church — giving his life for her (Eph 5:25). I look forward to meeting you, my brother.
Hud Griffith
Great tribute to a man who loved and served.
Loretta Fleetwood
I attended the service at the McCale Center yesterday with fellow MACC brother Andre Mixon. On the way back to the car, Andre kept saying “The President said Mountain Avenue Church of Christ!” As a result of standing in line all day and visiting with those around us, 3 people said they want to visit our congregation.
Teresa Nystrom
In the midst of tragedy I’m happy to hear that this horrible deed may have a silver lining for Mountain Avenue Church of Christ. Dory loved the church and would be so pleased to know people are visiting the congregation because of his influence. Even in death he is having a positive influence to bring people to Christ.
Hildred Lockaby
Romans 8:28
And we know that all things work together for good to them that love God, to them who are the called according to his purpose.
Ruth Atnip
Our thoughts and prayers go out to you and your family during this time. We want to thank you for posting this tragic but inspiring story of the selfless act that Dory did for his wife. It’s very encouraging. Love and prayers from QP &amp; Charidy Bean (Members of the Hinesville Church of Christ, located in GA)
QP & Charidy Bean
What an unspeakable tragedy, but what un uplifting memorial! What a tribute to Bro. Stoddard! We can gain much inspiration from the fact that, even though he might not have been able to do the “leadership activities,” he “did what he could.” He was there at the church building most every day doing something he could do, most often for those left out. The president mentioned a church, and that was the Mountain Avenue Church of Christ. The example of Bro. Stoddard and this mention now has motivated some to want to attend. What an example of faith!
Harold Williams
Greater love hath no man (husband) than this that he will lay down his life for his friend. Husbands love your wives as Christ love the church and gave himself… All of those scriptures was manifested in that act of sacrifice. Love is more than a proclamation, but it must manifest itself in a demonstration. amen to brother stoodard for letting his light shine in a dark moment.
rb
robert brooks
On behalf of the Skelmersdale church of Christ in the Northwest of England, I want to express our condolences to our sister Mavy Stoddard and her family as they come to terms with their tragedy. Also, their congregation, who I am sure will be helping to strengthen and encourage them at this time.
Though we are separated by thousands of miles physically, we are united together by our common faith.
PeteHodge