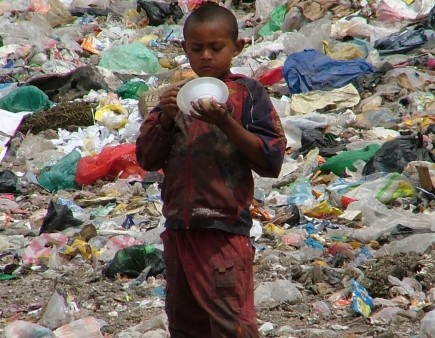 Preparing a feast in a Honduras dump

Erik Tryggestad
Christians will set up tables, chairs, silverware, cups, soap and water in a garbage dump outside of Tegucigalpa, Honduras, this month as they serve the poorest of the poor.
The “Jesus banquet” is modeled after Jesus’ challenge in Luke 14:13 — “But when you give a banquet, invite the poor, the crippled, the lame, the blind” — said Trey Morgan, minister for the Childress, Texas, church.
Looking through a missionary newsletter about a year ago, Morgan read about a group of Hondurans so poor that they were living at a dump, digging through the trash for anything edible.
The missionaries, Marc and Terri Tindall, started taking about 300 sandwiches to the dump each week. In a recent blog post, Terri Tindall wrote about witnessing the Hondurans as they scrambled toward a truck loaded with discarded leaves from vegetables and rotten fruit.
“They were ecstatic to have such a find,” she wrote. “To think someone’s waste was another person’s food.”
The missionaries were running out of funds for the sandwiches, so Morgan launched a fundraiser on his blog, www.treymorgan.net. The news spread across the Internet through Facebook and Twitter.
“Can’t stand watching people search for something I have so abundant. I want to help,” one donor wrote. A third-grade class collected $8 for the effort. In all, the fundraiser netted $12,500.
The missionaries have been feeding the Hondurans from the back of a truck, but the December banquet will be on a grander scale, Morgan said.
“I’m still amazed at just the thought of having a sit-down banquet at a dump,” he said. “Instead of them getting one small bowl of food, they’ll eat until they are full.
“The missionaries have worked hard to build a relationship with these people and will continue to use the Jesus banquet to reach them.”