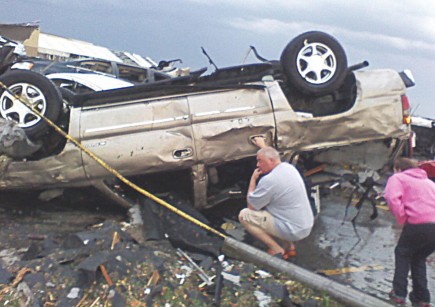 Bobby Ross Jr.
For three hours after a massive tornado ripped through Joplin, Mo., on May 22, Kim Spink was missing.
Spink, wife of Greg Spink, minister for the Mt. Hope Church of Christ, had gone shopping at a Walmart where one wall was left standing, her husband said.
“She was behind it,” Greg Spink said. “God blessed her and took care of her. She’s one of the few that walked out. She stepped over bodies on her way out.”
Southwestern Missouri’s death toll stands at 151.
The tornado heavily damaged the 26th and Connecticut Church of Christ building, leaders said.
The Mt. Hope church building did not sustain damages and has become a hub of relief efforts by individuals, congregations and ministries, including Nashville, Tenn.-based Churches of Christ Disaster Relief Effort. Donations can be sent to the Mt. Hope church at 2830 Mt. Hope Road, Webb City, MO 64870.
The tornado spared Ozark Christian College, which is associated with instrumental Christian Churches. Victor Knowles, founder and president of Joplin-based Peace on Earth Ministries, said the storm devastated south Joplin.
“Ozark Christian College is in north Joplin, where a lot of the ministries are located, and all are OK,” Knowles said.