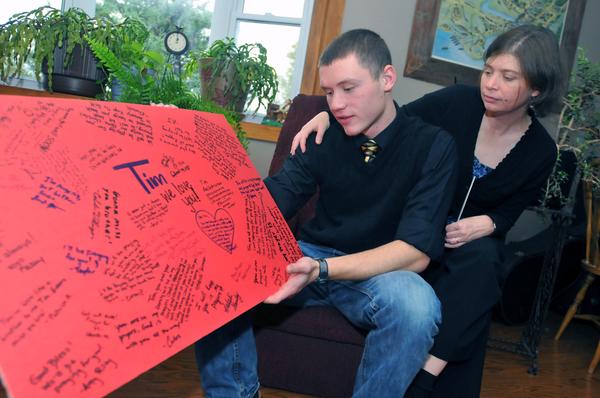 Timothy Kashorek and his mother, Lori, look at messages written by his classmates at Ohio Valley University in Vienna, W.Va. Mother and son were both diagnosed with cancer and received cards and prayers from across the country. (Photo by Kelly Catana, The Press-Republican, via www.pressrepublican.com)

In the August print edition of The Christian Chronicle, Douglas Kashorek, minister for the Plattsburgh, N.Y., Church of Christ, reflected on the lessons learned from his wife’s cancer battle.
In recent months, the Kashoreks’ son Timothy has faced a cancer fight of his own.
The Press-Republican in Plattsburgh reports:

WEST CHAZY — Lori Kashorek and her son, Timothy, have received more than 138 cards in eight months.
The mother and son, both battling cancer, were diagnosed within just months of each other.
Lori, 41, a former choral teacher at Cumberland Head Elementary School, found out by accident in March that she had cancer.
An X-ray she had for a frozen shoulder showed swollen lymph nodes in her chest. After seeing a few doctors, Lori was diagnosed with Stage 3 lung cancer. She has never smoked.
She posted the news about her illness on Facebook, asking for prayers. And that month, she underwent surgery and chemotherapy.
An outpouring of support from friends and family followed.
”It’s been very comforting the whole time to know my name is being put before God constantly,” Lori said from her West Chazy home. “And he listens.”