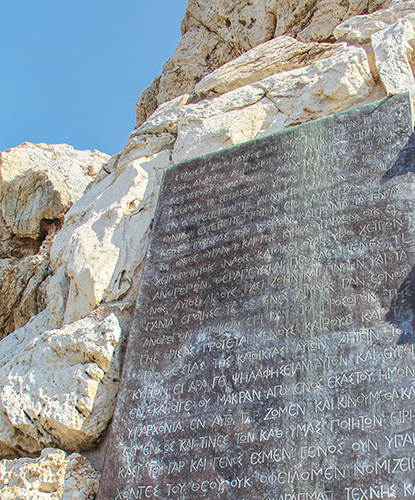 Two thousand years after Paul addressed the Areopagus, Greece still matters, say Christians as they reach out to a diverse population.

On ancient Mars Hill, the apostle Paul once stood and preached to the Greek high court, using their altar “To the unknown God” as an opportunity to tell them about the one true God.

Nearly 2,000 years later, Paul’s words from Acts 17 stand in bronzed Greek letters at the hill’s base, seen by millions of tourists each year.

But beyond the ice cream parlors and souvenir stands that line the streets near the Acropolis, the modern, European nation of 11 million souls faces “the most difficult and challenging moments in Greek history since World War II” as it struggles to repay its debts, said Alexander Melirrytos.

So the minister for the Omonia Church of Christ appeals to an authority higher than the banks, the eurozone and the world.

“We ask you to flood heaven with prayer,” Melirrytos said in a message to U.S. supporters, including the Hillsboro Church of Christ in Nashville, Tenn.

Greece’s financial crisis threatens not only the stability of the eurozone — 19 nations that share a common currency, the Euro — but also the work of Churches of Christ in Greece, who serve and share Christ with immigrants from around the world — including places where practicing Christianity is difficult and dangerous.

On a recent Tuesday, four young immigrants arrived at the meeting place of the Glyfada Church of Christ, on the south side of Athens, to study the Bible with ministers Dino Roussos and Dimitris Argyropoulos. One of the young men had visited the church on a previous Sunday and was eager to share what he learned with his friends. 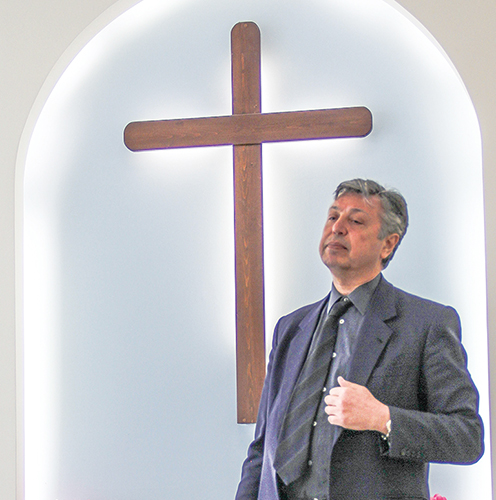 Dimitris Argyropoulos, a minister for the Glyfada Church of Christ, helps conduct a Bible study with  a group of immigrants. (PHOTO BY ERIK TRYGGESTAD)

Roussos, a longtime evangelist in Athens, made sure that the young men had copies of the Bible in their native language — and a translator. By reaching out to immigrants, Greek Christians have helped win souls and plant Churches of Christ in other countries, including Albania and Bulgaria.
Recently, the church has become a family of refuge for those fleeing the violent conflict in eastern Ukraine.

Leonid Ivanov, a Church of Christ minister and neurologist from Yasynuvata, Ukraine, fled with his family as fighting intensified in nearby Donetsk. Arriving in Greece, they became active members of the Glyfada church, reaching out to other Russian speakers.

“Only here I realized how important it is for people who move to a new country to hear God’s Word in their own language,” Ivanov said.

Learning that the church translates its messages into Russian, some refugees who had given up on their faith have returned, he said, and “many new people come also to hear the Word of God.” Recently, a Russian speaker from the troubled Republic of Georgia was baptized.
SURVIVING ON A FISCAL CLIFF
Athens’ multicultural churches share in their country’s woes — including a crushing debt load and nearly 25 percent unemployment nationwide.

On a recent Sunday, as Christians worshiped across the city, citizens in this ancient nation — where democracy was born — went to the polls to vote on whether or not to accept a bailout deal offered by international creditors. Voters rejected the deal, leading to tense negotiations to keep Greece from default. 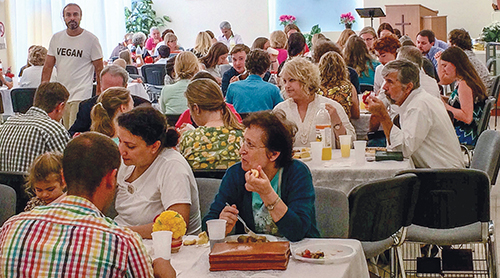 GREEK FELLOWSHIP: Members of the Glyfada Church of Christ share a meal with students from Harding University in Greece, a study abroad program of the Searcy, Ark., university. Harding President Bruce McLarty preached for the congregation on the Sunday that Greeks voted to reject a financial bailout package.

“He gave us a powerful message of hope,” minister Dino Roussos said. “God is our rescue, even during the difficult times that the people in Greece are facing these days.”

Banks were closed and automatic teller withdrawals were limited, Melirrytos said. Retirees were allowed to take only small amounts from their pensions each day, “resulting in long waiting lines outside the banks — and in hot weather,” he added.

As they prayed for God’s providence, Melirrytos and his wife, Eleni, promised to serve the Omonia church as best they could.

“We will stand next to each other and share all we have,” Alexander Melirrytos said. “No one will be without food or a roof over his head.”

Their prayers were answered, Greek Christians said, as the nation reached a last-minute deal to remain in the eurozone. But future struggles, including tax hikes and other austerity measures, remain.

Roussos said, “We continue to pray that things will work out. We thank God because our citizenship is in heaven, and the Kingdom of God is not of this material world.”