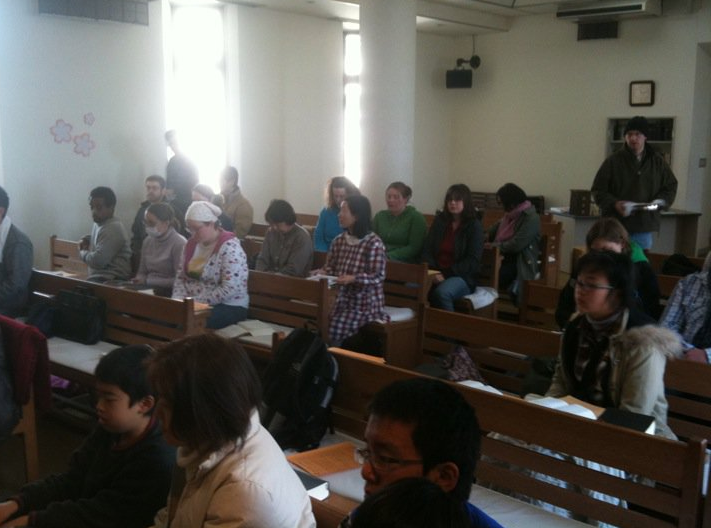 The Mito Church of Christ meets Sunday for the first time since the Japan earthquake. (Photo by Kendon Murrell, via Oklahoma Christian University Facebook page)

I wanted to briefly offer a few words of explanation regarding the significance of the disaster in Japan as it relates to our fellowship.
As you have heard, the situation in Japan, especially on the eastern seaboard, is quite desperate, and the seriousness seems to worsen as the extent of the devastation comes more and more to light.
The eastern seaboard of Japan’s main island has been a prime location for church planting, and congregations were intentionally established near major train stations in cities along the eastern coast, primarily in Miyagi, Fukushima, Ibaraki and Chiba prefectures.
Sendai (the capital of Miyagi prefecture and one of the chief cities that was impacted by the tsunami) is home to an important congregation in Japan. At this point, I have heard no news regarding the congregation in Sendai, though others may have heard more.  John Osborne’s brother, Joel, was a missionary in Sendai and is currently working with the Mito congregation.
Mito is the capital of Ibaraki prefecture and has experienced several major aftershocks of severe magnitude.  We praise God that the congregation at Mito was able to gather Sunday for worship! Although I have not heard reports of damage to the building, we have seen images of severe damage in Mito.
Ibaraki Christian University is near Hitachi in Ibaraki prefecture, which is between Mito and Sendai (closer to Mito).  I have inquired about damages to the school, students and faculty and have heard news that the school sustained no major damages and as of now it is believed that members of the campus community are unharmed.  The area has no running water, gas or telephone service, and electricity was restored only a short while ago.
I have heard no reports regarding the congregations in this area. The tsunami did enter Hitachi port, but was not as severe as in northern regions.
In Fukushima, it was just reported that a second hydrogen explosion has occurred at a nuclear plant (the first explosion occurred on Saturday).
The situation in Japan is desperate. With nuclear radiation threat, continued aftershocks, the potential for further tsunami, rescue operations, tens of thousands missing, lack of food and water, falling nighttime temperatures and general despair, there is much to keep in prayer.
Here is a link to a Japanese news program broadcasting from Tokyo that is offered in English.
The devastation to Japan is the worst in its recorded history, and I wanted to draw attention to the concentration of Churches of Christ along the eastern coast.
God give them peace, and be merciful to them all!
Chris