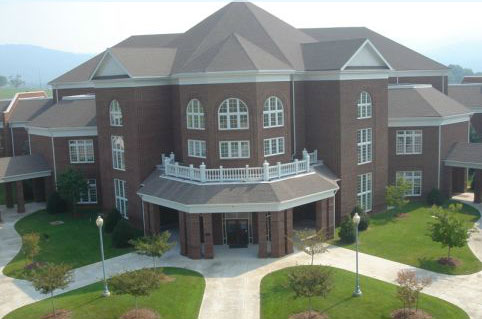 Nov. 5 update: An Alabama television station reports on the Mayfair prayer service.
One week from the U.S. presidential election, Churches of Christ are hosting nonpartisan prayer events for people before they head to the polls (or after, if they live in a state with early voting).
In Huntsville, Ala., the Mayfair Church of Christ will host a prayer service at 2 p.m. Sunday, Nov. 4, al.com reports.

The Mayfair Church of Christ’s building in Alabama (Photo via www.mayfair.org)

The only thing that will be at the center of the platform at Mayfair Church of Christ … will be an historic Bible that was read in the United States in 1776.
And it’s not a color-coded Bible, with Conservative Red or Liberal Blue markings, says Jason Bybee.
Bybee is one of Mayfair’s ministers who has helped plan the community-wide, non-partisan service to pray for America.
“We live in such bifurcated, ‘Red State,’ ‘Blue State,’ times,” Bybee said.
“We do not want to be one more voice creating fragmentation. We want to be the voice for people of faith coming together to seek God’s wisdom and counsel.”
And that means actually seeking God’s wisdom, not just finding proof texts in the Bible to justify one’s personal politics, Bybee said.
The point of the hour-long service is to remind Christians of all – and no – political leanings that they have much to remember in unity: Each person’s personal need for repentance, a shared love of America, and, especially, the ultimate sovereignty of God.

Read the full story.
The church purchased 131,000 impressions on digital billboards to invite the community to the prayer service, member Tim Hall said.
The Grandville Church of Christ in Michigan recently hosted a Wednesday evening prayer service for the nation.
“This is a prayer for our nation and the upcoming election,” said church member Shirley Boorsma. “This is not a political endorsement for any candidate or party.”
Is your church planning a prayer event or special service before the election? Please share the details.