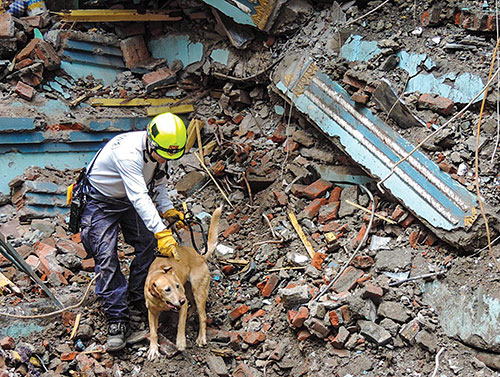 A Virginia church deacon and a team of dedicated rescue workers and canines travel the world to sniff out and free those trapped in the rubble of disaster.
Hamil R. Harris
Ron Sanders is indeed a world missionary.

But instead of preaching sermons or leading Bible studies, Sanders has traveled to Japan, Haiti and New Orleans to sift out life from endless mounds of rubble along peril-laced paths lined with concrete, twisted steel and destruction.

“This was the gift that God gave me,” said Sanders, a deacon of the Dale Ridge Church of Christ in Roanoke, Va., and a member of the Fairfax County Urban Search and Rescue Team. As a part of Virginia Task Force 1, he travels with a team of fire and rescue workers to help victims of natural and man-made catastrophes.

Last year he journeyed halfway around the globe — to Kathmandu, Nepal — with the task force after a massive, 7.8-magnitude earthquake rattled the Himalayan nation, killing more than 9,000 people and leaving 23,000 injured. 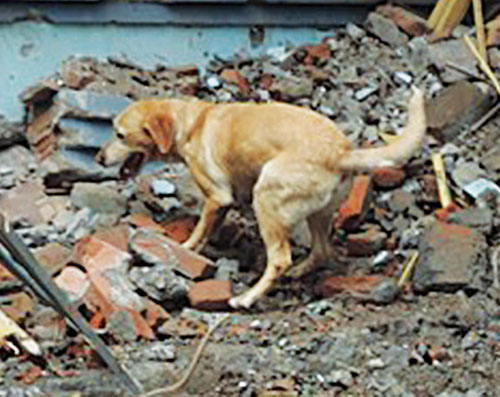 This dog can preach a sermon

“Before many people arrived, I placed Pryse in a small, collapsible crate behind the communion table,” Sanders said. “After the announcements and prayer I went to the front and let Pryse out.

“Most people were very surprised when she came springing out because she had been so quiet. Many did not know she was there.

“I had Pryse come and lay down beside me. I read from Genesis 22 and talked about what great obedience Abraham had shown on the mountain (where he was willing to sacrifice his own son). I ended by saying that I want to be obedient to my Master — and I am sure he forgives me when I make mistakes. Just as Pryse looks forward to her reward of playing with her tug toy, I look forward to that time when I will be with my Master in heaven.”
Though far from home, the rubble of Nepal was familiar territory for Sanders and his partner Pryse, a tan Labrador retriever trained to locate souls trapped in fallen buildings.

The two spent days listening (and sniffing) for life with other handlers and search dogs that were part of the response team.

“It was very sad,” he said of the destruction he saw. “You pray without ceasing.”

Yet Nepal proved to be a testimony to his faith as searchers found a 15-year-old alive — five days after the earthquake.

But for every person team members found, there often were days of fruitless searching, walking through jagged debris, straining to find signs and sounds of life.

For Sanders, being quiet and soft-spoken is a must for the job.

“I’m not a speaker, I am more of a hands-on kind,” the church deacon said. A retired firefighter for the Lynchburg, Va., fire department, he was mentored by a woman on Fairfax Country’s search and rescue team who worked with a dog named Ondo. When she learned she was dying, she asked Sanders to take over as Ondo’s partner.

Sanders trained with Ondo, and the two earned certification as a search and rescue team. Together, they traveled to Haiti after a building collapse to search for survivors.

Sanders has since worked with two other rescue dogs — Tomo and Pryse. They serve as part of Virginia Task Force 1, a team of about 200 specially trained career and volunteer fire and rescue workers. Emergency managers and planners, physicians and paramedics serve with the task force — including those who specialize in structural engineering and hazardous materials.

In 2010, Sanders returned to Haiti with Tomo after that country’s devastating earthquake. 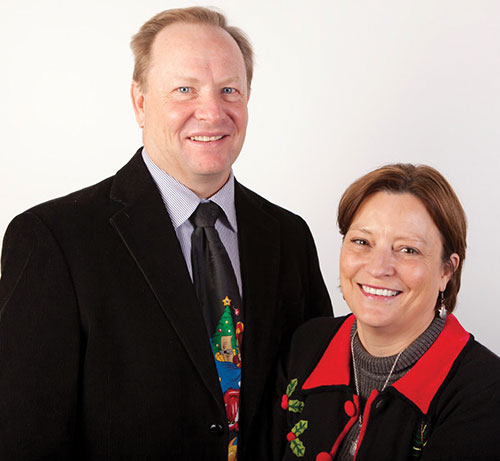 Ron and Lynné Sanders (PHOTO PROVIDED)“I think Ron feels he has a special skill set that can help save lives,” said his wife, Lynné. “He gives a lot of time to unselfishly help others.”

Many of his searches don’t involve headline-grabbing catastrophes, his wife added. He helps search for missing children and elderly people who have wandered from home.

“I definitely would consider his love language (to be) acts of service,” Lynné Sanders said. “His favorite book of the Bible is James because it talks about how faith should produce good works. He is proud of his work but doesn’t seek the limelight. He truly does it to help others.”

Ron Sanders always is prepared to serve — at worship or in the field — said Justin Imel, a former minister for the Dale Ridge Church of Christ.

“Ron called me some time ago and expressed angst at missing the Sunday morning assembly because he was at a crime scene,” Imel said. “I reminded Ron that Jesus served, and he was serving the authorities which God himself had ordained.”

In 2014, as thousands were dying in West Africa from the Ebola virus, “Ron called to see if he could find a group associated with our brotherhood where he could go to Africa and help,” Imel said. “If anyone else had called me, I would have laughed, but Ron is certified to work in such environments.”

“He does good work,” Imel said of his friend. “His servant heart is huge.”