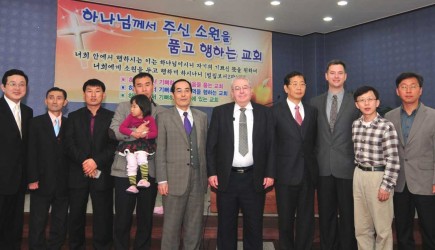 Praising Jesus on the island of Jeju

Erik Tryggestad
The island of Jeju, off the southern coast of the Korean peninsula, is home to the highest mountain in South Korea — the volcano Halla-san.
It’s also home to the Jeju Jung-Ang Church of Christ, which hosted an island-wide lectureship recently. Malcolm Parsley, a longtime missionary to Korea, organized the event. Stephen Wolf was the guest speaker. About 35 people attended.
Wolf, an active-duty officer with the U.S. Air Force, is stationed on the island of Okinawa, Japan, and worships with the Chibana Church of Christ there. Seven evangelists also attended an all-day preacher workshop, Wolf said.