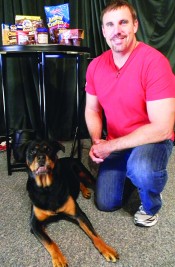 In a Kentucky town, church leaders bring teens and parents together and focus on God’s vision for healthy sexuality.

Bobby Ross Jr.
RUSSELLVILLE, Ky. — “Sex Talk Live” came to town on a recent weekend.
Leaders of the Crittenden Drive Church of Christ couldn’t have been more pleased.
The question-and-answer session focused on God’s vision for sexuality and featured Steve Holladay, founder and director of the Ultimate Escape ministry.
As part of a two-day workshop dubbed “Truth About Sex,” teens from the Kentucky church’s youth group — and their friends and neighbors — peppered Holladay with questions.
What do you do when you’ve already messed up?

How do you get bad experiences out of your mind?

How can you encourage your friends who’ve already had sex that they can be forgiven and change their ways?

These were among the questions that Holladay tackled as he addressed an auditorium full of sixth- through 12th-graders and their parents.
Ultimate Escape, based at the Greenville Oaks Church of Christ in Allen, Texas, helps young people pursue healthy sexuality and overcome addictive sexual behavior. Holladay and his wife, Holly, founded the ministry in 2004.
Steve Holladay speaks from experience: He credits God and a faith-based treatment program with helping him overcome a pornography addiction. He later earned a master’s degree in counseling and completed additional clinical training.
“I wish they did something like this when I was growing up,” said Kelly Hamilton, a Crittenden Drive member who attended the seminar with his 13-year-old son, Jarrett. “We grew up not talking about sex a lot in the family.”
‘SEX THE WAY THAT GOD DESIGNED IT’

For many families and churches, sex remains an illicit topic of discussion.
But in this tight-knit farming community, Crittenden Drive church leaders decided to push the subject into the open.
“As far as the state of Kentucky, our county has been one of the worst as far as high school pregnancies and things like that,” said youth minister Daniel McCarley, who grew up in Russellville and later played soccer for Ohio Valley University, a Church of Christ-associated school in Vienna, W.Va.
While society may tout condoms and birth-control pills to prevent pregnancies, practicing “safe sex” was not the emphasis of the church program.
“We want to teach them God’s plan — to wait until they’re married,” McCarley said, “so they can enjoy sex the way that God designed it to be.”
‘APPROPRIATE, PG-13 LEVEL’ DISCUSSION

Incorporated in 1798, Russellville traces its name to William Russell, a Revolutionary War general.
About 50 miles north of Nashville, Tenn., the town conducts an annual Tobacco and Heritage Festival, at which residents re-enact a local bank’s 1868 robbery by the notorious Jesse James gang.
Church leaders put up a sign at a major street corner advertising the sex workshop, and deacon Rusty Clark, president of First Southern National Bank, organized a luncheon to promote the program to area pastors. The bank underwrote Ultimate Escape’s costs.
More than half of the roughly 150 teens and parents who attended came from outside the Crittenden Drive church.
“It’s much needed,” Clark said. “Like Steve said, if we don’t teach our kids about sexuality in our homes and in the churches, they’ll find out about it from their peers, at school and from the Internet and other media.
“So I’m just really encouraged by what he’s doing,” he said of Holladay. “I’m glad he’s got a passion and a heart for it.”
Except for the subject matter, the scene resembled any church youth event — with teens clad in jeans, T-shirts and hoodies flirting and playfully punching members of the opposite sex while sharing popcorn, nachos and soft drinks.
Holladay opened by promising to discuss sexuality in an extremely open manner but at an “appropriate, PG-13 level.”
In sessions that stretched over 15 hours that Friday night and Saturday, he delved into neurochemistry, exploring sexual triggers in the brain.
The psychology graduate of Freed-Hardeman University in Henderson, Tenn., contrasted society’s view of sex in a hook-up, friends-with-benefits culture with God’s portrait of a lifelong intimacy between one man and one woman, united in holy matrimony.
In an age when teens can access full-motion sexual images with just a few clicks on a computer or smartphone, in-depth discussions focused on sexual purity, dealing with hurts — whether sexually related or not — and starting over after past mistakes.
“Sexuality is probably the single biggest issue that Satan uses to separate people from God and cause a lot of shame and guilt,” Holladay said over scrambled eggs and bacon at The Cattle Pen, a popular eatery not far from the church.
“A lot of the youth ministers I talk to echo that,” he added. “This issue is the biggest challenge that their kids face.”
It’s certainly a challenge for teens at the Crittenden Drive church, McCarley said.
“I’ve had kids who’ve admitted they’ve struggled with pornography and different issues with a boyfriend or a girlfriend,” the youth minister said.
McCarley knew Holladay from youth rallies and Christian camps and called him to seek advice on a specific situation. That led to the Ultimate Escape founder traveling to Russellville and teaching a class for teens and parents.
That initial presentation excited the congregation and sparked the idea of a more in-depth study, church leaders said.
Rusty Clark’s daughter, Molly, 17, said she learned about hormones and brain functions in high school anatomy class — but not about God’s plan for sex.
“The biblical standpoint wasn’t there,” she said.
“I mean, everybody learns about sex,” agreed Molly’s friend Katelyn Jones, 16. “But I don’t think they go into full depth about what Christ expects of it and stuff.”
As for discussing terms such as “orgasm” and “masturbation” in a church setting, Katelyn acknowledged,
“It’s kind of awkward … but it’s the good kind of awkward, and people need to learn about it. It’s not a subject you need to be blind about.”
‘THERE’S A LOT OF PRESSURE TO HAVE SEX’

Pam Jones, Katelyn’s grandmother, was not shy about voicing her appreciation for the focus on sex.
“Society teaches us to use sex as entertainment, whereas God has a special plan that he says will make us happier if we do it his way,” said Jones, a 48-year member of the Crittenden Drive church.
“Yes, sex is a wonderful thing, but God gave us guidelines,” she added. “Just like we all love to eat, but he also says, ‘Don’t be a glutton.’”
On a student evaluation form, a 13-year-old boy characterized the seminar as “awesome!!”
“Keep going,” he wrote. “Kids these days need to know what you have to share. Thank you very much! You probably just saved me from more bad choices.”
A 14-year-old girl wrote: “I loved it. It really made me more confident in my decisions to stay abstinent.
There’s a lot of pressure to have sex, and I’m not willing to risk the consequences or wreck my relationship with God. I think my virginity is a gift from God and should be shared with my husband when I get married.”
In the “Sex Talk Live” session, teens could text questions to Holladay anonymously or scribble notes on pieces of paper and drop them in a box.
“If you do something you regret, does that make you a bad person?” one teen asked.
“No,” Holladay replied. “If you do something that you regret, that makes you human. Welcome to humanity.”