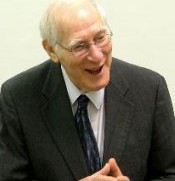 Erik Tryggestad
Dr. Henry Farrar, a pioneering medical missionary in Africa, died Feb. 22 in a Nashville, Tenn., hospital. He was 83.
Six days before his death, Farrar fell and hit his head after arriving at Carthage, Tenn., General Hospital where he worked. The fall caused a neck fracture and complications from which he never recovered.
In 1965 Farrar became the first located surgeon at Nigerian ChristianHospital, a church-supported medical mission in southeastern Nigeria.The West End Church of Christ in Nashville sponsored Farrar.

British physician Dr. Robert Whittaker succeeded Farrar 20 years later.Whittaker came to Nigeria after reading an article by Farrar invitingphysicians to spend vacation time at the hospital.
Farrar earned his medical degree from the University of Tennessee. Inaddition to his work in Nigeria, he served as a surgeon at ChimalaMission Hospital in Zambia. In 2005 a leader of the Asa community inNigeria gave him the honorary title of chief. He and his wife, Grace,had six children.
At his bedside, Farrar’s family sang his favorite hymns, including “Letthe Lower Lights be Burning” and “We’re Marching to Zion,” saiddaughter Marty Highfield.
Janice Bingham, associate professor in the College of Nursing atHarding University in Searcy, Ark., described Farrar as an “icon inmedical missions.”
In a message to Farrar, Bingham wrote, “You have influenced literallythousands of people to serve the Great Physician in Africa.”
Leave a message for the Farrar family at Henry Farrar’s Caringbridge site — www.caringbridge.org/visit/henryfarrar .
Memorial services:
Feb. 27, 2:30 p.m. — College Hills Church of Christ, 1401 Leeville Pike,  Lebanon, Tenn., (615) 444-9502, www.collegehills.org.
March 1, 2 p.m. — Harding University, Searcy, Ark., Heritage Auditorium. Visitation: noon to 2 p.m. in the Liberty Room of the Heritage Center.