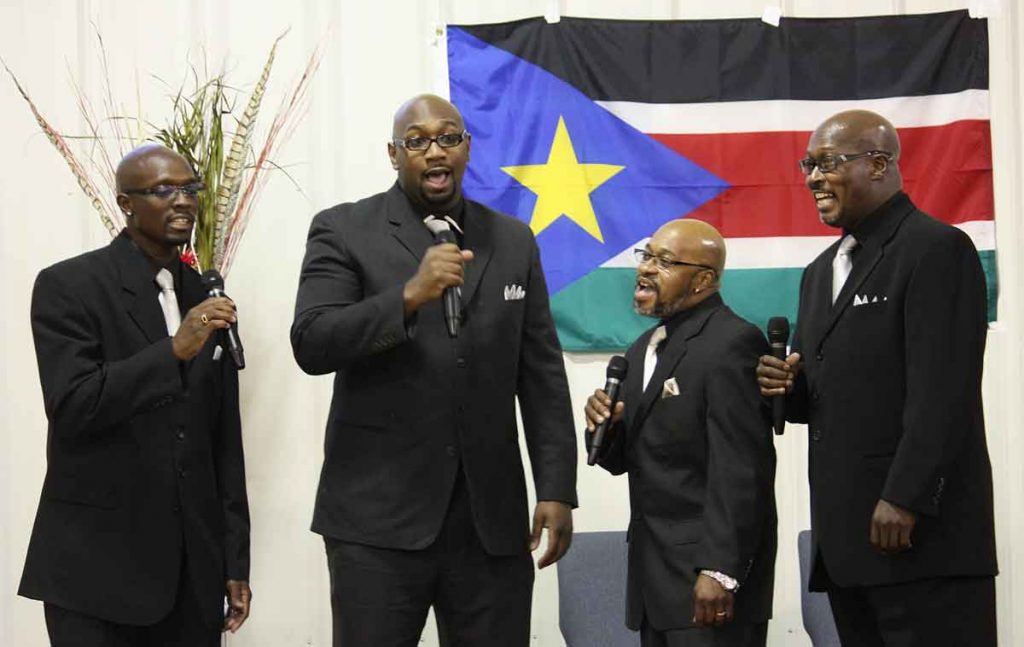 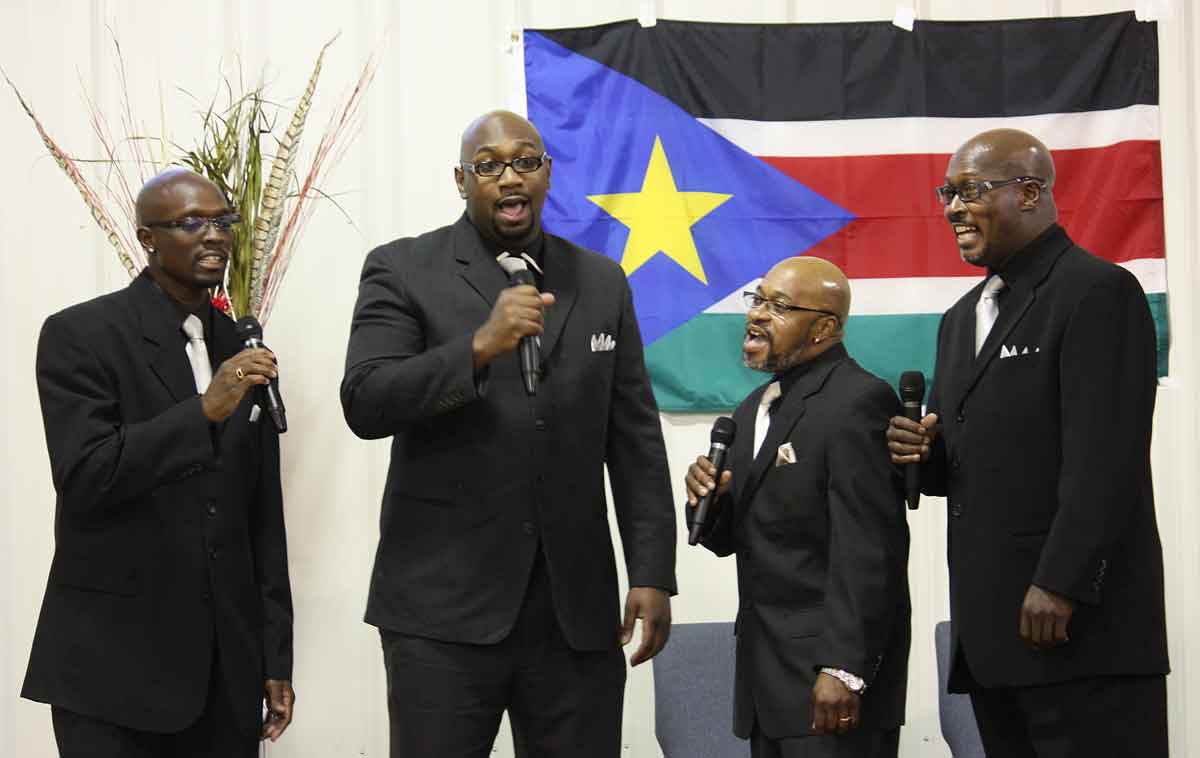 A cappella group The Fishers sing in front of the South Sudan flag at the annual Brothers’ Organization for Relief Appreciation Reception at the Swope Parkway Church of Christ in Kansas City, Mo. (Photo by Erik Tryggestad)

(Hear a cappella group The Fishers singing “In My Father’s House.”)
About 100 church members and representatives of community organizations gathered at the Swope Parkway Church of Christ in Kansas City, Mo., recently to celebrate South Sudan, which became an independent nation on July 9.
“I know they say it takes a village to raise a child,” John Gak told the audience. “It takes an entire church — the Swope Parkway Church of Christ — to build a school in my hometown.” 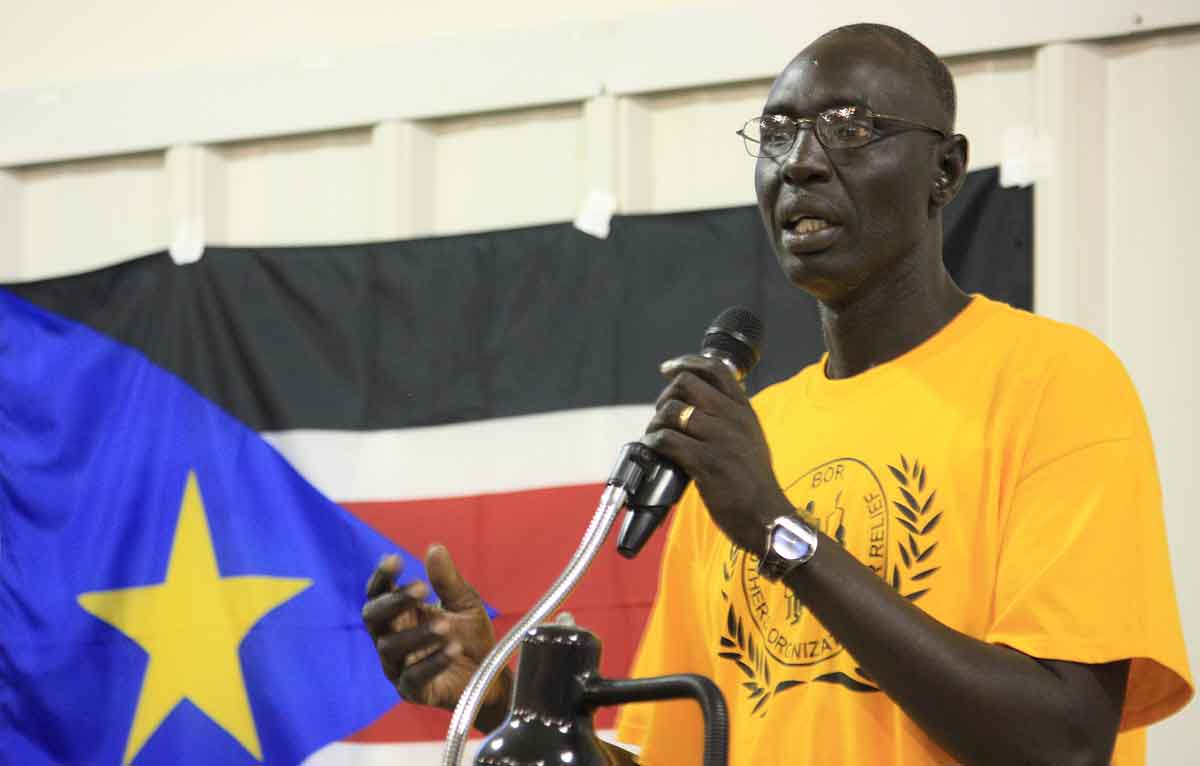 Gak, a native of South Sudan and a member of the Swope Parkway church, oversees Brothers’ Organization for Relief, or BOR, a ministry dedicated to establishing a church and multi-use education building in Kongor, Gak’s hometown. (“BOR” also is an homage to Bor South County in South Sudan’s Jonglei state, where the town of Kongor is located.)
The organization, founded 11 years ago, helped the “Lost Boys of Sudan” living in the Kansas City area. I wrote a feature about Gak in 2004 and a blog post about his most recent trip to South Sudan.
The annual Bor banquet, held at Swope Parkway’s building, featured an African lamb and onion dish prepared by Gak’s wife, Aja. There also was a silent auction and a trivia quiz about South Sudan. (Not bragging, but I scored a solid 100.) 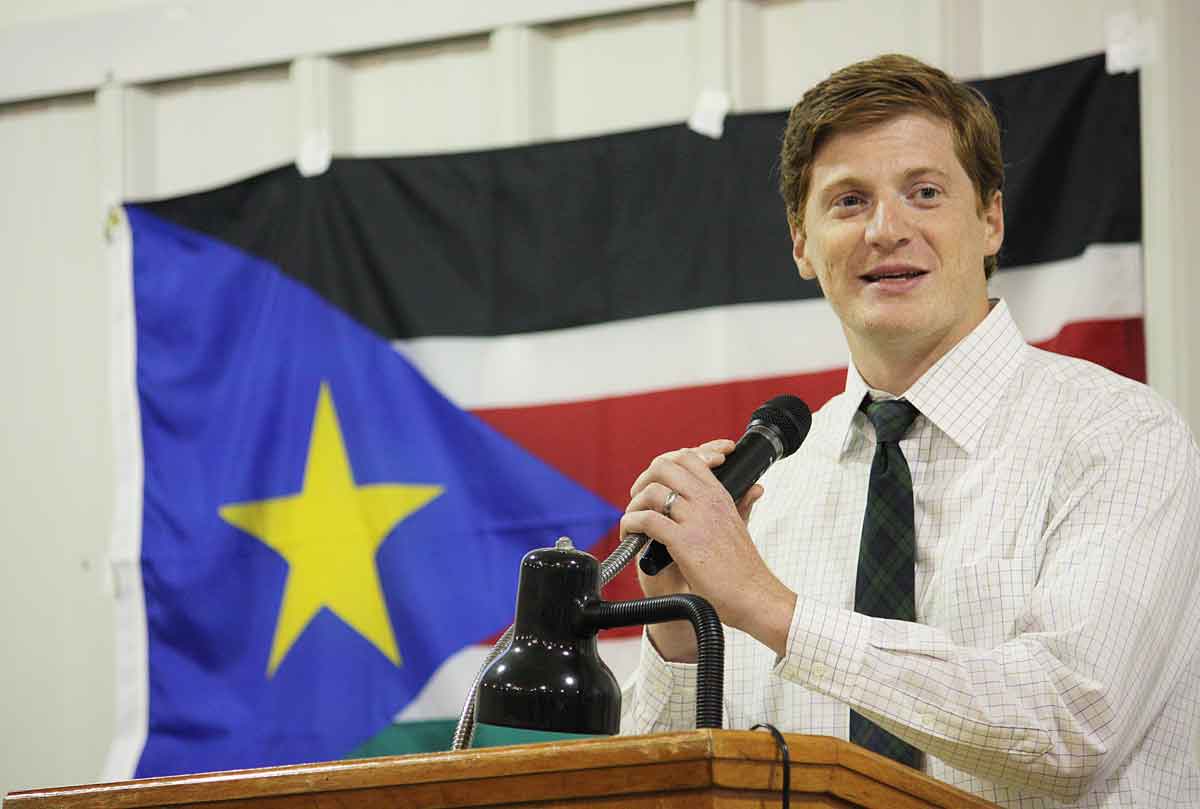 Nathan Shain, a video journalist with Kansas City’s NBC Action News KSHB, traveled to South Sudan with Gak in May to see progress on the school. At the banquet, he showed news stories he filed from the trip and talked about the South Sudanese people’s “amazing will to keep going” in spite of decades of fighting and other obstacles.
Shain met Gak when he was assigned to cover a prayer service for the South Sudan independence vote in January. He followed Gak to Omaha, Neb., where Gak and other Sudanese living in the U.S. participated in the vote for independence from Sudan’s Muslim-dominated north.
“Really, the role I played in this is so small, compared to the work others have put into it,” Shain said at the banquet. “The news can be a rough business at times,” he added, so he was glad to be able to cover the positive developments in South Sudan.
“What’s really exciting about this work that you’re doing is that it’s just starting,” Shain said. “There so much work still to do.”
Pete Peoples agreed. The Swope Parkway member is chairman of BOR. The new school building, nearly completed, needs fencing, electricity and water, he said. Swope Parkway began overseeing BOR about seven years ago and has posted information about the work and videos on its website. The church seeks additional partners to assist in the work in South Sudan. 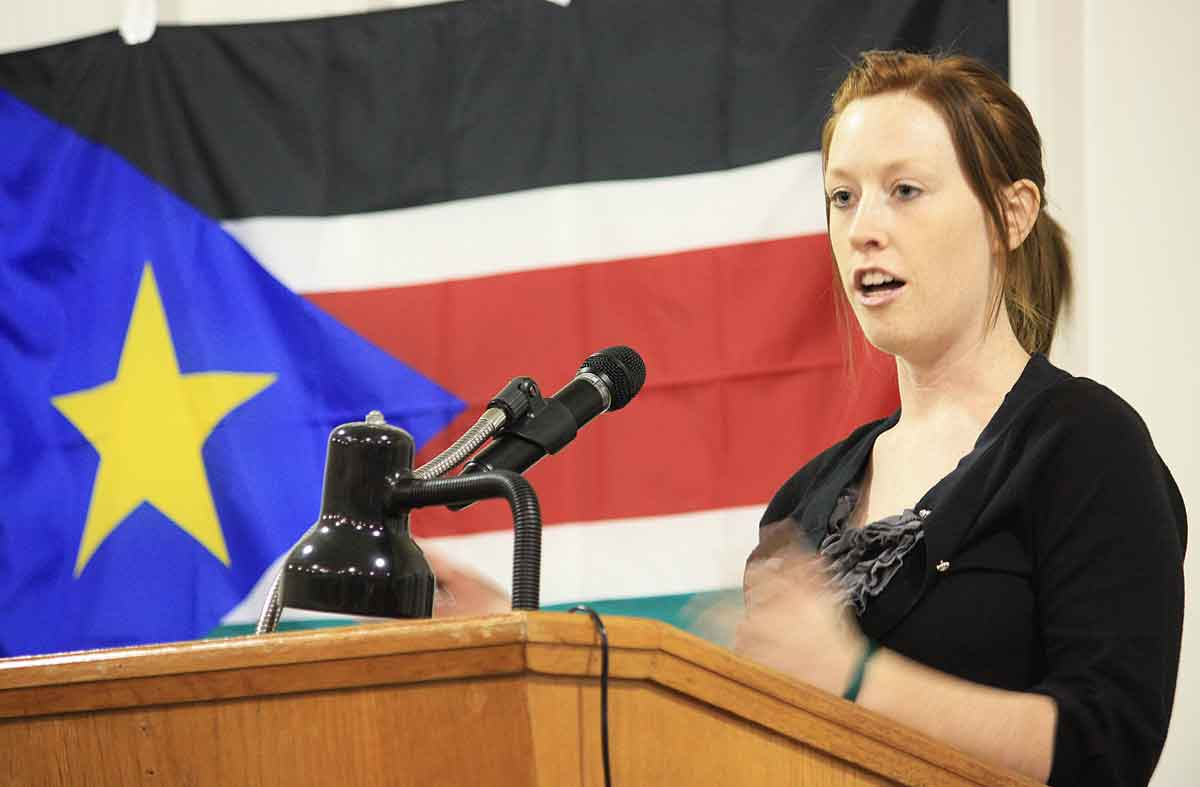 During the banquet, Kaeanna Wood, a staffer for U.S. Rep. Emanuel Cleaver II, D-Mo., spoke about the congressman’s respect and appreciation for BOR’s work in the Kansas City area and around the globe in South Sudan.
I had the privilege of traveling to South Sudan — a few months before its independence — with another Church of Christ ministry, The Sudan Project. The ministry of the Mt. Juliet Church of Christ in Tennessee focuses its efforts in Parajok, a small town in the southeastern corner of South Sudan. (See our previous reports about South Sudan’s independence.)
It was fun to compare travel notes with Shain and learn about his South Sudan experience. (He and Gak spent a night in a broken-down car on the way to Kongor.)
I also talked with Swope Parkway member Sharon Jackson, who traveled to southern Sudan with Gak in 2004.
“It’s amazing to actually see the people,” she said. “Seeing is better than being told.” 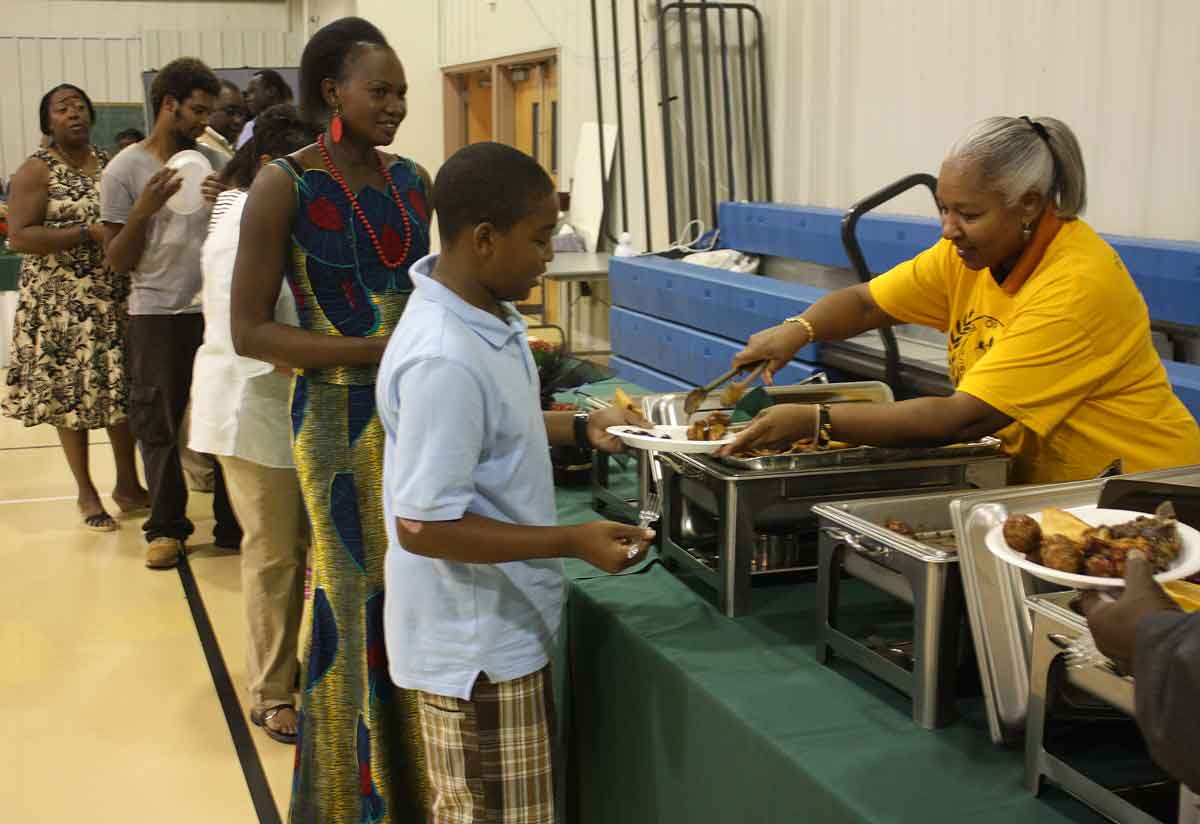 Natives of Kansas City and South Sudan line up for food at the BOR reception. (Photo by Erik Tryggestad)