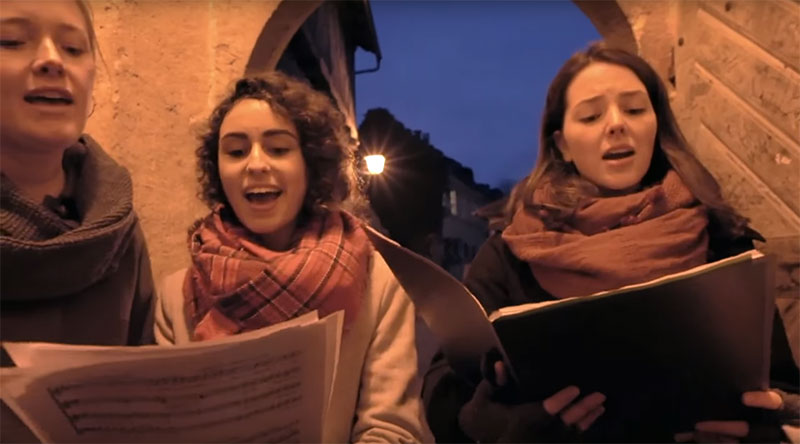 Video: Petitioning God at the gates of the city

Participants in the Euro-American Retreat sing “Veni, Veni Emmanuel” (“Oh Come, Oh Come Emmanuel” in Latin) at the gates of the ancient city of Rothenburg ob der Tauber, Germany. As members of Churches of Christ from across Europe and the U.S. gathered for the annual celebration, they blessed the community with music, said Keith Lancaster, longtime participant in the event and director of Acappella Ministries.
(RELATED COVERAGE: In Europe, a chance to reach Islam: Christians meet to ponder their continent’s refugee crisis — and find opportunity to serve at their doorstep.)

Phil Jackson of Missions Resource Network, who coordinates the retreat, “decided last year there should be more engagement with the local German community instead of having only an inward-focused retreat,” Lancaster said.  Participants sang a cappella hymns at a local Franciscan church.

Singing at the Rethenburg Retreat

Singing in a old church in Rothenburg. I think we did great. If you didn’t know any better you would assume we do this all the time 😀

“It went over so well that this year they invited our group to sing on Sunday afternoon, during a time in which attendance turned out to be much greater,” Lancaster said. “The retreat began on Saturday evening, so we had less than 24 hours to put the concert together for Sunday. Katie Young of Marseilles, France, coordinated the entire concert.”

More than 55 singers, nearly three times as many as last year, sang during the 2015 concert, Lancaster said. In addition to English, participants offered hymns in German, Dutch, Romanian, Russian and French.

The Greatest Command, song by our annual spontaneous choir concert (We have to do it a 3 time next year to make it a tradition ;))