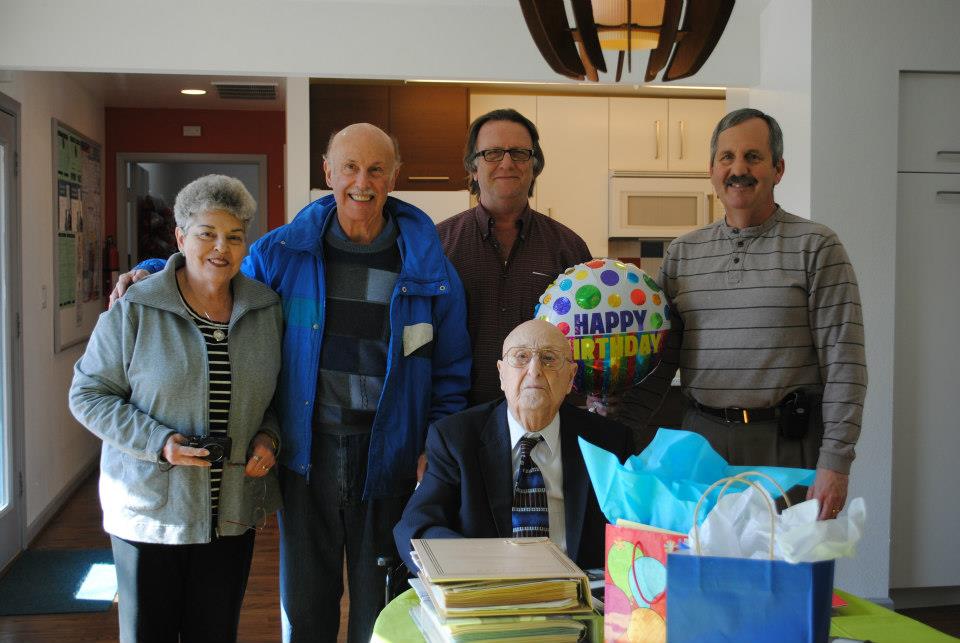 
Perry B. Cotham, a gospel preacher for more than 80 years, died Tuesday, Feb. 26, at the Texas residential care home where he had lived since 2011.
He had celebrated his 101st birthday on Jan. 5, said Terri L. Green, owner of Grand Prairie, Texas-based PBH Residential Care Homes.

Cotham was “highly esteemed” by fellow residents of the Keith Heights retirement home, where he had lived since November 2011 and was a charter resident, Green told The Christian Chronicle.
“He was affectionately known as ‘poppa’ by the staff,” Green said. “He was unanimously appointed the patriarch of the group and assumed his role as spiritual leader by saying ‘grace’ at every meal. Until recently, when his health declined, he occupied his time by daily reading his Bible and other doctrinal and spiritual books and wrote letters to family, friends and fellow laborers in the Lord’s work around the world.”
On his Facebook page, Robert Prater, minister for the Central Church of Christ in Shawnee, Okla., reflected on Cotham’s death:

Churches of Christ lost an enduring “legend” among preachers yesterday (Tuesday)  … Brother Cotham preached at here Central from 1934-1940 and came back a number of times for meetings and speical occasions including our Centennial back in 2007 where he preached during Bible class hour powerfully and flawlessly at age 95!! He preached in many gospel meetings, did mission work in India, Malaysia, and Thailand and of course wrote a number of gospel tracts and literature. What a reminder to us that it is not our age, but our willingness to keep on going however long we have serving the Lord with all of our might! May God give us that kind of spirit and more Christians!

Andy Brewer, minister for the Phillips Street Church of Christ in Dyersburg, Tenn., blogged last year about Cotham’s status as “standard-bearer for longevity in ministry among churches of Christ.”
His son  Perry C. Cotham provided the following obit:

Perry Boyd Cotham, gospel preacher, departed this life on February 26, 2013, in Grand Prairie, Texas, at the age of 101. He was born the eldest son of Ben B. and Nannie Boyd Cotham of Murray, Kentucky, on January 5, 1912. He was baptized at an early age, finished high school in three years, and soon began preaching in 1929. He enrolled in Freed-Hardeman College (then a junior college) in September, 1929, and graduated in June, 1931.  Following this and preaching in and around Murray, he attended Murray State University, and graduated with a B.A. degree in June, 1934.  He has been preaching since 1929.
After visiting relatives in Oklahoma in the summer of 1934, he moved to Shawnee to do full time work there with the growing church. While there he married Teresa Naomi Overby, daughter of a gospel preacher named Coleman Overby in Muskogee, Oklahoma. Later he moved to Oklahoma City, then to Wewoka, and later to Duncan. All of these cities are in Oklahoma. He moved to Paris, Texas, and then preached for the Lindsley Avenue church in Nashville, Tennessee. Later he moved to Grand Prairie, Texas, to work with the church to help sell church bonds and erect the Turnpike Church of Christ new building. Later he moved to the 14 th and Main Church of Christ in Big Spring, Texas, where he served for nearly ten years.  While there he made two mission trips overseas to Brazil and South Africa.
On June 1, 1972, realizing the need of preaching the gospel to the whole world, he resigned work in Big Spring, moved back to Grand Prairie and assisted by Skillman Avenue church in Dallas and interested brethren, began to do world-wide evangelistic work. Perry has always wanted to be a gospel preacher, and this he has done the greater part of his life—over 80 years.  Having delivered a few sermons as guest speaker after turning 100 years of age, he clearly would be among the oldest preachers, if not the oldest, in the history of the Church of Christ.  He has preached in all the fifty states of America and in all inhabited continents of the world, being in over 75 nations.  He has also bought and distributed many thousand of Bibles for various parts of the world. He has written and distributed millions of copies of his gospel tracts. Perry has made twelve trips to India, with many hundreds being baptized, and fifteen or more trips to Singapore and Thailand. He provided, with the help of many good friends, many hundreds of Bibles. He has always been grateful for their help.
His wife departed this life in January, 1998. He is survived by two sons, Perry Coleman Cotham and wife, Glenda, of Brentwood, Tennessee, and Harry Don Cotham of Houston, Texas, and one daughter, Nan Elizabeth Cotham Macleod and husband, Edward, of Arlington, Texas. He was preceded in death by two younger brothers, Preston (in 1998) and Harry (in 2008). There are also five grandchildren, nine great grandchildren, many nieces and nephews, and a great host of dear friends in all parts of the world.

Funeral services will be at 2 p.m. Saturday, March 1, at Cross Point Church of Christ in Grand Prairie. Visitation will be 6 to 8 p.m. Friday, Feb. 28, at Bean Massey Burge on Beltline Road.