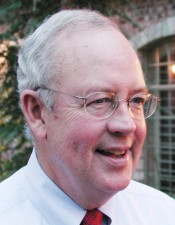 Kenneth Starr, dean of the Church of Christ-associated Pepperdine University School of Law in Malibu, Calif., since 2004, will take over as Baylor’s 14th president June 1, officials announced this afternoon.

Starr is best known for his role as independent counsel in the Whitewater investigation during the Clinton administration.

“While I look forward to the honor of serving as Baylor’s next president, my wife, Alice, and I know how much we will miss Pepperdine,” Starr said in a statement provided by Pepperdine.

“Working with Pepperdine students, faculty and the law school’s alumni has been one of the most satisfying and rewarding experiences of our lives,” he added. “ We will be forever grateful for the many wonderful friendships, encouragement and support we received while we have shared our lives with the Pepperdine community.”

The younger Starr began his college career at Church of Christ-associated Harding University in Searcy, Ark., before transferring to George Washington University in Washington, D.C.

While at George Washington, Starr worshiped with the 16th and Decatur Church of Christ and taught the high school Sunday class, he told The Christian Chronicle in a 2004 interview.

“As the years went on, I moved into evangelical Christianity,” Starr told the Chronicle. “I worshiped for many years at the McLean, Va., Bible church. Now, we are worshiping at the University church on Pepperdine’s campus, which we love. I am thankful to be worshiping again in the Churches of Christ.”

But Starr, whose wife was raised Jewish, has declared that he will join a Baptist church upon moving to Waco, the Waco Tribune-Herald reported.

Andrew K. Benton, Pepperdine’s president, thanked Starr for his service to the law school and university and congratulated him on his Baylor appointment.

“Ken has had a tremendous impact on our students, the law school and the Pepperdine community at large,” Benton said in a statement. “His leadership, his love of scholarship and his devotion to our students helped raise the national stature of our school and we will benefit from the good he accomplished here for many years to come.”

In response to Starr’s appointment at Baylor, Benton said that a national search for the dean’s replacement will begin soon.

“From working closely with our faculty and mentoring our students to hosting luminaries on campus and arguing prominent cases, Dean Starr’s energy and enthusiasm have been inspiring,” Tippens said in a statement. “We look forward with optimism to building on the strong foundation he nurtured during his tenure at Pepperdine.”