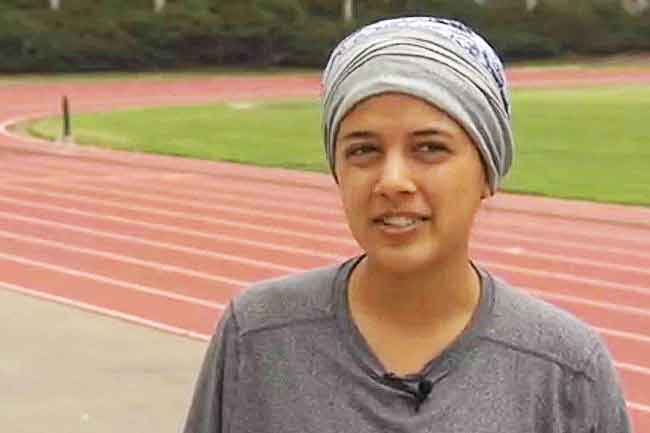 Sarah Attar, 19, is a junior at Pepperdine University in Malibu, Calif. The university is associated with Churches of Christ, though its students come from diverse religious backgrounds. (Photo provided by the IOC, via Associated Press)

One of the first women to compete for Saudi Arabia at the Olympics was born and raised in California.
The International Olympic Committee announced this week that Saudi Arabia, a Muslim monarchy that places heavy restrictions on women in daily life, would have women on its Olympic team for the first time at the London Games. The athletes are Wodjan Ali Seraj Abdulrahim Shahrkhani, who competes in judo, and Sarah Attar, a 19-year-old junior at Pepperdine University and a graduate of Escondido High School in California.
Attar, who trains in San Diego, has dual citizenship because her father is Saudi Arabian. She will compete in the 800 meters in London, although at Pepperdine she has primarily run longer events, including the 1,500 meters and the 3,000.
Perhaps in anticipation of the scrutiny Attar will receive in her groundbreaking role as a Saudi Olympian, her family asked Pepperdine to remove photos of Attar and the names of her family members from her online biography. Some photos showed her competing for Pepperdine wearing a tank top, shorts and no head scarf. In Saudi Arabia, most women cover their heads and faces in public and wear a black cloak called an abaya.

Read the full story.
(Thanks to Christian Chronicle Facebook fan Steve Byrne for the heads-up. Byrne is minister for the Church of Christ at Pearl Harbor in Hawaii. If you’re not a Facebook fan of the Chronicle, we would love your support. Find us at www.facebook.com/ChristianChronicle.)