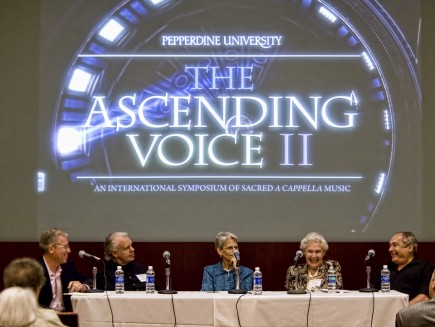 Bobby Ross Jr.
MALIBU, Calif. — This sun-drenched city on the Pacific coastline is known for sandy beaches, surfboards and stargazing — Hollywood style.
It was singing, though, that drew an estimated 500 music composers, choral directors, choir members, biblical scholars and ordinary church members to Pepperdine University for a recent four-day conference.
“The Ascending Voice II,” an international symposium of sacred a cappella music, involved members of Churches of Christ as well as Mennonites, Eastern Orthodox, Reformed Presbyterians, Episcopalians and Roman Catholics.
“Because Pepperdine is affiliated with Churches of Christ, it’s natural that we have a lot of people from Churches of Christ and have a very strong a cappella tradition,” said Darryl Tippens, Pepperdine’s provost and co-convener of the symposium along with music professor Lincoln Hanks. “But what’s clear is we’re not the only ones … who have a love of congregational singing and a love of a cappella music.”

“The Ascending Voice” debuted at Pepperdine in 2007 — the brainchild of Tippens, who saw it as a way to celebrate and promote a cappella worship in a world of praise bands and recorded music.
Like the first symposium, the sequel combined scholarly presentations on topics such as “Little Known Pages from the History of Russian Sacred Music” and “Singing in Reformation Scotland and Early America” with more contemporary themes such as “Singing and the Spiritual Formation of Children” and “Worship Spaces and Effective Singing.”
Performers included singing groups from universities associated with Churches of Christ, including Abilene Christian University in Texas, Harding University in Searcy, Ark., Rochester College in Michigan and Pepperdine.
Everett Ferguson, distinguished scholar in residence at Abilene Christian and a leading authority on ancient Christianity, presented a theology of singing. Tom Olbricht, distinguished professor emeritus of religion at Pepperdine, discussed singing in early American churches.
Tippens said he hoped the symposium could play a role in refreshing and renewing a cappella singing.
“I hope we’re planting a mustard seed here, and that by bringing in people literally from all over the United States and from around the world, we will create a rich new understanding of a cappella music,” he said. “(I hope) there will be a new fervor about the importance of preserving it, taking it home to our local congregations, sharing what we’ve learned, and in a sense, renewing the tradition.”
Asked if he thinks of a cappella singing in terms of tradition or doctrine, Tippens replied, “Well, obviously, there’s a doctrinal element to it.
“But let me also say, in many churches, we have turned a cappella singing into a barrier,” he added. “It’s become a wall of separation between us and others. It doesn’t have to be a wall. I think this week the wall has fallen, and it’s become a bridge.
“A cappella music should be a bridge to all sorts of people in our culture. And if we find it’s a barrier, we’re doing it wrong.”

Neglect of congregational singing — not any outside force — poses the biggest threat to a cappella worship, Tippens suggested.
Panelist Ken Adams, professor of music and chorale director at Oklahoma Christian University in Oklahoma City, agreed.
“It’s lost ground already, and unless steps are taken, just the course of inertia will continue to send it down that road, I’m sorry to say,” Adams said.
In an earlier interview with The Christian Chronicle, Adams said many congregations sing fewer — and in some cases, none — of what he described as “the great Protestant four-part hymns or even the Stamps-Baxter songs, which used to be the more popular style of our song repertory.”
“Instead, they are quickly moving to praise songs,” Adams said. “Thus, we are producing a generation that, if they are not in school music, may have never looked at a piece of written music. They have not learned to sing a harmony part in church, and that musical concept is generally foreign to them.”
In Adams’ view, Churches of Christ are losing the “common language” of sacred song.
“The different generations no longer have a body of worship songs that is known by the entire congregation,” he said.
“Grandchildren don’t know the music of grandparents, let alone the music of the worldwide body of believers from the past four to five centuries. We are experiencing the fragmentation of the main corporate activity in our common worship experience.”
Brad and Alice Anne Light, a married couple in their 20s, performed at “The Ascending Voice II” with the Harding Chamber Singers.
The couple, both of whom grew up in Churches of Christ, said churches put too little emphasis on teaching young people to sing.
“It seems like we spend 50 percent of our worship time singing, but there’s almost no education … on how that process works, how you read music, what music is good for singing and that sort of thing,” Brad Light said.

How can congregational singing be improved?
Two potential keys were explored at the symposium:
• Marti O’Rear, children’s minister at the Greenville Oaks Church of Christ in Allen, Texas, shared insight on singing and the spiritual formation of children.
O’Rear, a trained vocalist and a music education graduate of Pepperdine, mixed advice on teaching children to sing with demonstrations of songs ranging from “Hear O Israel” to “I’ve Got the Joy, Joy, Joy.”
“As always, we want some fun songs that help our children to engage in singing, but mostly want to encourage music that calls our children to worship — songs that help convey truth, songs that incline their hearts toward God, songs that reflect Jesus’ love and sacrifice and songs that express thankfulness,” O’Rear told the Chronicle.
• Kelly Neill, assistant professor of music and concert choir director at Harding, focused on church building acoustics.
Congregational singing places unusual demands on a room, but often, acoustics are not even considered when a church building is constructed or remodeled, Neill said.
In many cases, weak singing may be less of a reflection of a church’s health than of a building’s poor design, he said.
“Improving the acoustics in a worship facility may improve the singing and, in turn, our perception of a church’s health,” Neill said.
“Better acoustics are probably not a panacea for every church problem, whether low attendance or active involvement or singing,” he added. “I simply want to make the case that careful consideration of acoustics
will help congregational singing more than most people realize.”
The 400-member Johnson Street Church of Christ in Greenville, Texas, is developing plans for a new building.
Johnson Street minister Randy Daw, who heard Neill’s presentation, said the advice will come in handy, as will other insights he gained at “The Ascending  Voice II.”
“I’m also a composer, but I think congregational singing has more influence on the health of the church than the preacher does,” Daw said. “I think a cappella singing is gaining traction in the wider world of Christendom, and I’m glad to see it happening.
“I think that treasuring that and making it better is a very important part of our heritage.”

Rejuvenating a cappella music, reviving its appeal to a younger…