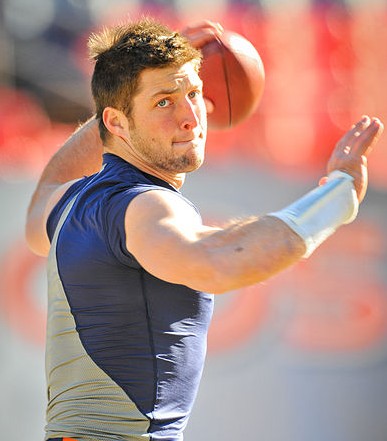 Newly-signed New England Patriot Tim Tebow is the featured speaker at this weekend’s Heartlight 2013, a fundraiser for Agape Child and Family Services Inc., a Memphis, Tenn.-based ministry dedicated to providing children and families with healthy homes.
Tebow, the 25-year-old, 250-pound quarterback who twice led the University of Florida football team to a national championship, talks about his life and his faith June 15 at the FedExForum in Memphis. Tebow’s career in the National Football League has fizzled, some sports commentators say, since he was drafted in the first round by the Denver Broncos. Yesterday he was signed by the Pats, ESPN reports.
Born in the Philippines to Christian missionary parents, Tebow is equally renowned for his athleticism and his unabashed faith. During his days at Florida, he wrote Bible verses into his eye black.
Agape was birthed in 1969 during a meeting at the Holmes Road Church of Christ in Memphis. Church members across the nation support the ministry.