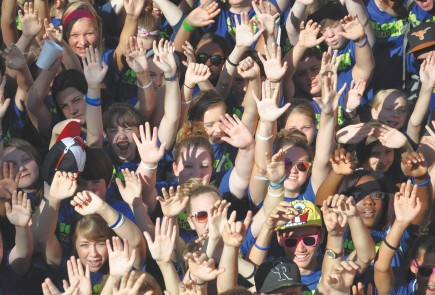 Staff Reports
CAMPUS MINISTRY
GATORS FOR CHRIST
GAINESVILLE, Fla. — Gators for Christ members build wheelchair ramps as part of monthly service projects.
The University of Florida campus ministry, associated with the University City Church of Christ, has been doing the projects for about 10 years.
“There are many handicapped folks who cannot access their own homes very easily, so we try to make a difference in their lives by giving our time and resources,” campus minister Donny Dillon said.
The ramps have helped lead people to Christ, Dillon said.
CHILDREN AND FAMILIES
CHRIST’S HAVEN FOR CHILDREN
KELLER, Texas — Christ’s Haven has opened a “teen mom cottage” to serve mothers and children. Up to four teenagers and their children will live in the cottage.
The program will provide for physical, medical and educational needs of the residents, the ministry’s newsletter said. In addition, the mothers will benefit from parenting classes, life skill classes and counseling.
WESTVIEW BOYS HOME
HOLLIS, Okla. — Westview received the 2013 Gov. Frank Keating and Carrie Keating Leonard Award for Youth Development, presented by the Oklahoma Center for Nonprofits.
Westview, which is associated with Churches of Christ, has served more than 2,000 at-risk boys since its founding in 1956, executive director Ron Bruner said.
HIGHER EDUCATION
FAULKNER UNIVERSITY
MONTGOMERY, Ala. — G. Scott Gleaves has been named dean of the V.P. Black College of Biblical Studies at Faulkner University, where his college experience began a generation ago.
“What a thrill to be dean at the university where my walk with Christ basically began,” Gleaves said.
He became a Christian during high school and came to then-Alabama Christian College as a Bible major “with hardly any knowledge of the Bible,” he recalled.
Gleaves succeeds Cecil May Jr., who retired to assume a new role as dean emeritus and focus more time on writing.
MEDIA
HOUSE TO HOUSE/HEART TO HEART
JACKSONVILLE, Ala. — The direct mail ministry recently celebrated sharing the Gospel with the entire state.
Nearly 300 Churches of Christ cooperated to send House to House/Heart to Heart publications to 1.9 million Alabama households.
Next, the ministry hopes to reach all of Tennessee.
“To date, we have covered about 25 percent of Tennessee,” said Matt Wallin, a House to House/Heart to Heart staff member. “Our current plan is to finish the other 75 percent by 2020, although we are hoping we can finish it sooner.”
Nationally, House to House/Heart to Heart publications reach 2.5 million households each month.

IN SEARCH OF THE LORD’S WAY
EDMOND, Okla. — “Search” has begun appearing on Inspiration International, a network that goes to 150 countries, speaker Phil Sanders said.
“The Lord has opened a marvelous door, and for the first time in my knowledge the Gospel of Christ will be preached each week throughout every corner of the United States and in 161 other countries by a television ministry among (Churches of Christ),” Sanders said. “By television and radio, ‘Search’ virtually circles the globe.”

SUNSET INTERNATIONAL BIBLE INSTITUTE
LUBBOCK, Texas — Sammy Flanary, a longtime minister and trainer for international missions, died July 11 at age 72.
For the past 16 years, he served as missions coordinator with the international division and advancement department of Sunset.
He was involved in training programs in Athens, Greece, and Donetsk, Ukraine, as well as mission work in Paris and Cairo.
“Sammy was a skilled teacher of the Word and a constant soul winner,” Sunset officials said. “Through the years he has excelled in mentoring younger men, who will undoubtedly continue his mission efforts.”