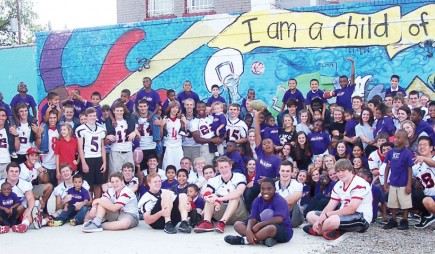 Teel, a missionary to Buenos Aires, Argentina, from 1980 to 1995, will also serve as president of Association Amicus, a Honduran not-for-profit organization that oversees the work of the James Moody Adams Clinic. The clinic partners with Virginia College of Osteopathic Medicine to provide medical services to the Baxter community and the poor.
“I am humbled that God is giving me the opportunity to work alongside the wonderful staff and faculty of Baxter Institute and the James Moody Adams Clinic,” said Teel, whose wife, Dianna, has served with World Radio for 15 years. “My prayer is that he uses us to take these efforts to even greater heights.”
FREED-HARDEMAN UNIVERSITY
HENDERSON, Tenn. — A facsimile of the Codex Vaticanus, one of the oldest surviving manuscripts of the Bible, has arrived on the Freed-Hardeman campus.
It’s one of 450 facsimiles of the fourth century manuscript that have been or will be issued worldwide, said Doug Burleson, Bible instructor and Gardner Chair occupant. The Codex Vaticanus facsimile joins one of the Codex Sinaiticus obtained by FHU last year.
“These are two of the three oldest complete copies of the Bible known to exist,” Burleson said.
Both codices will be prominently displayed Oct. 12 at the Graduate Bible Research Symposium featuring Daniel B. Wallace, founder of the Center for the Study of New Testament Manuscripts. For more information, see www.fhu.edu/gbrs.
LIPSCOMB UNIVERSITY
NASHVILLE, Tenn. — A recent Lipscomb fund-raising event called “Discover” allowed guests to enjoy food, audio tours and authentic displays of mission trips to India, Honduras and New York City.
In addition to the three sites featured in displays, student missionaries from 13 teams serving in locales such as Uganda, Moldova and northern California gave testimonies and highlighted diverse cultures.
For more information, see www.lipscomb.edu/Missions/GivingOpportunities.
OKLAHOMA CHRISTIAN UNIVERSITY
OKLAHOMA CITY — Jill and Cary Brown of Midland, Texas, have given Oklahoma Christian $1 million to fund student scholarships and renovate Benson Hall, President John deSteiguer announced.
The renovation will include the Terry and Marty Johnson Administrative Suite. It will be named in honor of Jill Brown’s parents, who served as Oklahoma Christian’s president and first lady from 1974 to 1996.
Benson Hall, named for former Oklahoma Christian chancellor George Benson, was one of the four original academic facilities built when the college relocated to Oklahoma City from Bartlesville, Okla., in 1958.

CHRISTIAN HOME AND BIBLE SCHOOL
MOUNT DORA, Fla. — Christian Home and Bible School is celebrating a $2 million gift from Dorothy B. Thompson of Leesburg, Fla.
The donation will fund a new wing and complete renovation of the Christian school’s science building,

President James Moore said. Thompson made the gift to honor her late husband, Jerome B. Thompson, a chemist and inventor.
Several years ago, Dorothy Thompson made the lead gift for a new residential group home to house children living on the Mount Dora campus, northwest of Orlando. The Thompson House was dedicated in 2010 and provides accommodations for up to 10 at-risk girls and their houseparents.
Christian Home and Bible School serves pre-kindergarten through 12th-grade students on a 70-acre campus.