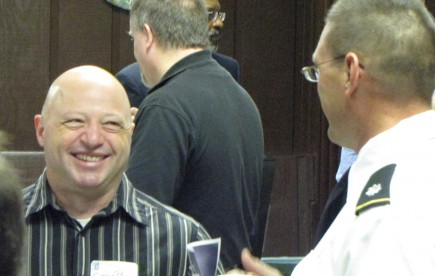 FROM STAFF REPORTS
CAMPUS MINISTRY   CHRISTIANS IN ACTION CORPUS CHRISTI, Texas — Christians in Action, a 3-year-old student organization at Texas A&M’s Corpus Christi campus, was honored as the university’s Organization of the Year.
“CIA-Corpus is extremely excited about being a Church of Christ campus ministry getting recognition from the university itself for all the hard work they have done,” said Clint Hill, director of CIA-Corpus.
“We give this glory to Jesus. … To receive this award is an honor, but all we are really doing is what Jesus told us to do — to seek and save the lost — and we will continue to do his will.”
CHILDREN AND FAMILIES   CIUDAD DE ANGELES ATLANTA — Jim Jinkins, a church member and creator of the cartoon series “Doug” and “HoopDogz,” was the guest speaker at the first Fiesta Dinner, a benefit for the Ciudad de Angeles (City of Angels) children’s ministry in Cozumel, Mexico.
More than 200 people attended the event, organized by Susie Winnett of the East Cobb Church of Christ in Marietta, Ga. The event grossed more than $16,000.
“These funds will be used for construction as we continue to grow the campus,” said ministry director Gary Gardner. For more information, see www.ciudaddeangeles.org.

ORPHANS LIFELINE OF HOPE LERMONTOVKA, Russia — Children and staff at the Lermontovka Children’s Home are rejoicing over asphalt.
The home, located in the strip of Russian territory east of China, recently completed a project that included defined parking spaces and safe walkways for the children.
The local ministries of health and education have looked at the home as a model for their own programs, according to Orphans Lifeline of Hope International, a Montana-based ministry that supports the children’s home.
For more information, see www.orphanslifeline.org.

SOUTHERN CHRISTIAN HOME MORRILTON, Ark. — A group from the College Street Church of Christ in Paris, Texas, helped with work projects at the home recently.
Men of the group built two new cattle guards at the home’s farm and added a new entryway with a “Southern Christian Home” sign.
The women taught a Vacation Bible School on campus.
CHRISTIAN MEDIA   INTERNATIONAL GOSPEL HOUR FAYETTEVILLE, Tenn. — An archive of audio and video material by V.E. Howard is available at www.vehoward.net.
It contains 230 radio broadcasts, two video lectures and two audio lectures.
Howard died in 2000 after 61 years of radio broadcasting. In 1995, he turned the International Gospel Hour over to the elders of the West Fayetteville Church of Christ, where Winford Claiborne continues the radio broadcast.
Howard held gospel meetings throughout the United States and baptized more than 8,000 people in his lifetime.
Chuck Richardson of Texarkana, Texas, who has been the International Gospel Hour’s technical director since 1980, digitized tapes of Howard’s radio broadcasts.
HIGHER EDUCATION   FREED-HARDEMAN UNIVERSITY HENDERSON, Tenn. — Hey, cool website.
That was message delivered to FHU.edu as it won recent honors from eduStyle.net for best home page and best integration of social networking.
The awards were given at a Chicago conference by eduStyle.net, which each year recognizes higher educations sites redesigned within the previous year.

LIPSCOMB UNIVERSITY NASHVILLE, Tenn. — Lipscomb President Randy Lowry participated in a recent White House policy briefing on Iraq and Afghanistan. Lowry, an expert in conflict resolution, was one of 40 faith-based leaders and scholars invited to discuss specific national issues with National Security Council officials.
Other participants in the discussion on included Mark Elrod, political science professor at Harding University in Searcy, Ark.; Mark Hamilton, associate dean of the graduate school of theology at Abilene Christian University in Texas; and Caron Gentry, associate professor of political science at ACU.
LUBBOCK CHRISTIAN UNIVERSITY LUBBOCK, Texas — Students enjoyed a 24-hour reading marathon of “The Chronicles of Narnia” as part of Lubbock Christian’s first Writing Carnival.
The recent carnival, which the university hopes to make an annual event, celebrated writing and all its many forms.
Faculty, staff and students took turns reading aloud the C.S. Lewis novels even during the late night and early morning hours. As part of a push to incorporate writing in more classes, organizers created stations covering six-word stories, graffiti and doodling, haiku, limericks, magnetic poetry and sidewalk chalk.
OHIO VALLEY UNIVERSITY VIENNA, W.Va. — J.R. Hoover, 14, worked on a recent project at OVU in an effort to obtain his Eagle Scout certification. Hoover, along with four other Boy Scouts, painted, cleaned and replaced ceiling tiles in OVU’s student-athlete fitness room.
“My parents both went to OVU, and our family volunteers some with them,” he said. “It just seemed like a really good project and a way to help.”
Scouts who helped were Tyler Foster,  William Christian, Bradley Morrison and Jacob Valentine.